Jake was born by emergency C-section on 2nd October 2013 and my husband Sam and I couldn’t have been happier to finally meet our little boy.

Day one of parenthood past without incident and, ignoring that the three of us were naturally exhausted and emotional, all appeared well as we went through the usual midwife checks.

On day two, people were beginning to notice that Jake had a blueish tinge around his lips. I wasn’t initially worried but when a paediatrician listened to his chest, she noticed a murmur. After further checks, Jake was sent for a full ECHO. It was terrifying – I was devastated and very emotional; my husband tried to stay strong and rational.

The diagnosis was a moderate-to-large ventricular septal defect, with a much smaller hole in the heart. We were told that the smaller hole could close by itself but this was unlikely with the larger hole. Jake would have to have heart surgery. We were told to look out for signs of cardiac failure, words I couldn’t believe we were hearing. It felt like a horrible dream. This was something that happened to other people, not us.

Fortunately, Jake was otherwise well and not in any immediate danger. The following day we were sent home with instructions to monitor for signs that Jake was struggling – not feeding well, sweating when eating, being overly sleepy or floppy, becoming puffy in the face, not putting on weight. We were regimental about these checks. There was a permanent sense of anxiety, along with the feeling of injustice that this could happen to our tiny new baby.

Our cardiologist at Great Ormond Street Hospital – to whom I will forever be grateful – spoke to us honestly and openly about Jake’s diagnosis, explaining that the hole was significant and that he would recommend surgery once Jake was big enough. We trusted him completely and, while the emotional strain was always there, his words were reassuring.

Thankfully, Jake grew well over the following weeks, and reached the target weight of 5 kg at the start of December. On 3rd January 2014, aged 13 weeks, Jake underwent open heart surgery at Great Ormond Street Hospital. He was in the operating theatre for 8 hours.

Nothing can prepare you for the moment you see your little baby in the intensive care unit with machines and wires supporting him.

Gradually, the wires were removed, the tubes taken out, and the move was made to the recovery ward where we could once again hold Jake and be responsible for his care. In some ways, this was the hardest part – without the one-to-one care from the amazing nurses it felt, to us, that Jake was even more vulnerable. 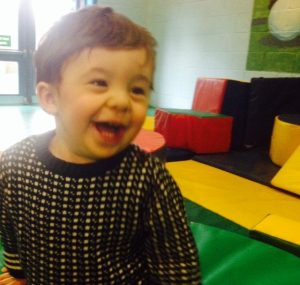 Within a week we were home, and Jake began to thrive. He got stronger, hardier, happier and, in turn, so did we. That was over a year ago.

Compared to a lot of babies, we know that Jake is very lucky that his heart defect was diagnosed and it could be repaired. He will continue to be tracked, and there will always be part of me that worries about his heart condition, but Jake is just a normal little boy with an active and exciting future ahead. We are so incredibly proud of him.

When I look back, I just wish I’d had the opportunity to speak to other parents who had been in the same position, to find reassurance in their stories and know that we weren’t alone. It shouldn’t have been a surprise to me to hear that heart defects are the most common defects babies are born with, but it was. Now I hope to spread awareness and let others know that support is there, and that our babies are stronger and braver than we could ever imagine.