During Alison’s second pregnancy she went along to her 20 week scan as normal and her sonographer saw that one side of her baby’s heart was bigger than the other. A rescan showed the difference in size to only be 1mm, which was within normal parameters, however to be on the safe side another scan was scheduled 6 weeks later. At this scan the consultant found that the difference in size had increased, which indicated a problem with the baby’s heart.

Alison was in a state of panic and had her antenatal care transferred to a specialist hospital so that when her baby would be delivered a consultant could be on standby, and her baby transferred straight into a neonatal intensive unit. Alison also had an extra scan at 36 weeks to monitor the difference in size between the left and right side, and to make sure it didn’t fall within dangerous parameters.

Alison recalls: “During the birth, I had a whole team of midwives, doctors and a consultant present and I was attached to a heart monitor for the whole time.”

When Mia was born she was immediately transferred to the neonatal intensive care unit and put on a Prostin drip to keep a small duct in her heart open. She was later transferred to a specialised cardiac hospital where she was diagnosed with Hyperplastic Aortic Arch with coarctation; Mia was operated on at three days old and left hospital after three weeks. 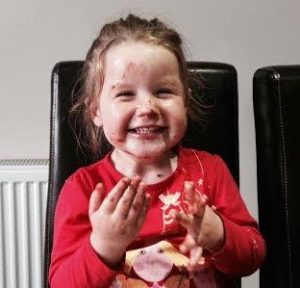 Alison says: “With hindsight, it is easy to say how lucky we were that the sonographer picked up the irregularities at the 20 week scan and that it wasn’t just dismissed as ‘within normal parameters’.  If it wasn’t for that, Mia probably wouldn’t be here today.

“If it hadn’t been detected, I would have delivered normally at my local hospital and Mia would not have had the Prostin drip fitted, which kept her alive for three days before her operation.”

Coarctation of the aorta accounts for 10% of CHD and can occur by itself or in combination with other types of heart defects.  The main artery (aorta) has a narrowing which allows less blood to flow through it.