Liam and I got married in May 2014 and immediately discovered that we were pregnant with our second child.  We were thrilled and, aside from a small bleed in the first trimester, the pregnancy seemed to be going according to plan and our scans didn’t indicate that anything was wrong.

However, at 32 weeks my bump was measuring very big, and the midwives discovered that I had polyhydrominis, which basically means there was too much fluid around the baby. Polyhydramnios can mean that the baby’s oesophagus is not joined to their stomach (an esophageal fistula) but this was impossible to confirm through blood tests and multiple scans. 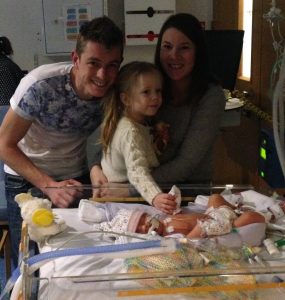 To minimise any risks, I was induced and delivered my new baby girl, Minnie, at 37 weeks. There was no immediate rush to treat the fistula so Minnie could stay with me and bond as soon as she was born.

After an hour of holding my new daughter, Minnie started to make strange noises (which initially I thought was cute, since I had no idea what they were), and then her skin changed colour. She was immediately taken away for tests which showed Minnie not only had the esophegeal fistula, but also a slight heart murmur. The doctor explained that Minnie would need to go to Leeds General Infirmary for specialised care.

I was literally being sick with worry – but I still had no idea how bad it was.

At Leeds, Minnie’s fistula was repaired but we then discovered that she had Hypoplastic Left Heart Syndrome and Coarctation of the Aorta. Her life expectancy would be no more than 30 years old.

I broke down. I am only 28, and I feel like my whole life is in front of me. How could it be so different for Minnie? Why had her heart problem not been picked up before now? I know that you can’t see everything in the 20 week scan, but I just assumed that something very serious would be detected.

After Minnie’s first operation, she wasn’t able to breath without the ventilator which raised more concern. Further tests revealed that Minnie had a section of muscle missing from her windpipe. It was becoming clear to me that things were very, very bad. 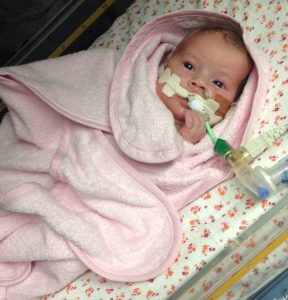 On the 27th of January (Minnie’s due date) the cardiac surgeon came to talk to us and explained that, because of the severity of Minnie’s heart defect, combined with the windpipe issue, she was a poor candidate for surgery and was not expected to survive. Even if she did, she would need long term breathing support and would spend most of her time in hospital with round-the-clock care.

Our whole world stopped, but we knew what this meant – Minnie’s lifesaving treatment was withdrawn and the key focus was to keep her comfortable. We used this time to make our own special memories of Minnie – giving her a proper bath and making hand prints.

At 2am in the early hours of the morning of 30th January, Minnie was taken off the ventilator, and she passed away in our arms. I could try to explain how it feels to lose your 23 day old baby girl, but there really are no words.  I was, and still am, completely devastated.

If Minnie’s heart defect had been detected when I was pregnant it wouldn’t have changed Minnie’s fate, but we could have been somewhat prepared for what lay ahead.

Liam and I are both strong believers in organ donation and, with fantastic support from the organ donor nurses, we decided that we would like to donate Minnie’s organs.

Both Minnie’s kidneys were successfully transplanted into a girl in her twenties and she’s doing really well. It brings us so much comfort to know she has saved a life.

Minnie really is our hero.