Champion jockey and Tiny Tickers ambassador, AP McCoy, has been knighted in the New Year’s Honours List 2016. AP, who retired from racing in April 2015, rode over 4,300 winners, and won an unprecedented 20 consecutive Champion Jump Jockey titles. 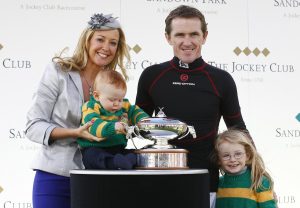 “I never thought anything like this would be bestowed upon me,” said the Northern Irishman. “You can’t be recognised in any higher way.

“For the number of years I was competing, I always tried to be as successful as I could, but this honour has as much to do with the people who helped me on the way as it does with myself.”

Tiny Tickers Chief Executive, Jon Arnold, adds “We are delighted for AP and cannot think of a more deserving recipient of this honour. Both AP and his wife, Chanelle, have been tireless champions of Tiny Tickers since becoming ambassadors and we are extremely grateful for their incredible charitable work. Congratulations Sir Anthony!”

Read more about the McCoy’s involvement in Tiny Tickers here.