We were expecting baby number 3 to complete our family. Ten minutes earlier, I had been mentally decorating a shared bedroom for my two little girls.  Suddenly I was facing the agonising wait to find out what was wrong with the heart of my third child.

We were told that our baby girl had Truncus Arteriosus, a defect in which a single blood vessel comes out of the right and left ventricles, instead of the normal two vessels (pulmonary artery and aorta).

It was terrifying but there was hope. I would deliver our baby at Liverpool Women’s Unit where she would undergo surgery on delivery.  I spent a week researching her condition and the operation, and began to feel more positive. I had a long list of questions to ask the pediatrician when I next saw him –questions I would never get to ask.

One week later, the scan images were clearer. Our baby didn’t have Truncus Arteriosus – she had an Interrupted Aortic Arch (type B) and her aorta was far too narrow to provide enough blood for her body. She also had a VSD (hole in her heart) which was so big that it would be impossible to close. She would require two open heart surgeries, spend her first 6 months of life in hospital and have a third surgery before she was 5 years old. Even then, there was only a 50-70% chance of her surviving. She needed a miracle if she was going to make it to her teens.

On leaving the hospital that day, I could feel my precious little girl moving around inside me. I had never been so distraught in all my life.  A decision had to be made.

We decided to seek a second opinion. 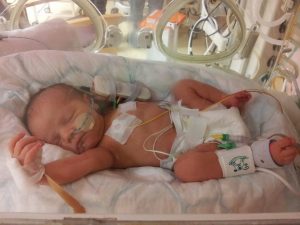 A few days later we were on our way to another fetal ECHO scan. The second team did agree with the majority of the first diagnosis and prognosis – but with one significant difference to the treatment plan.  Once she was born, the plan would be to insert an IV of Prostin which would keep her arterial duct open, thus allowing blood to flow to the lower half of her body until her operation. She would need surgery as soon as possible and they planned to use a Gore-Tex patch to close the VSD. All in all, they expected her to be in hospital for no more than 3 weeks.

And, most importantly to me, our baby would have a physically normal life.

There was still a 5% chance that she wouldn’t survive surgery, but, if she did survive she would be left with a much better quality of life. We had been offered hope – and we grasped it with both hands.

On the 22nd August, Martha Grace arrived into this world screaming and weighing in at 6lb 1oz.

After four days, she was transferred to Great Ormond Street Hospital for a 7-hour long surgery and,just 18 days later, Martha was on her way home.

However, our ordeal wasn’t over. Due to the size and position of her VSD, Martha Grace would undergo another operation at 12 weeks old. Complications from that operation would see her fitted with a pacemaker at 14 weeks old before having another open heart surgery at 4 months old. A 10-day stay turned in to a 10-week admission with Martha Grace spending her first ever Christmas in hospital.

As the New Year arrived, Martha began making big leaps of recovery. We managed to wean her off CPAP support and she became much better at tolerating feeds. After seven long weeks, she was moved out of intensive care and, on the 22nd of January, we finally brought her home, ten weeks after we brought her in.

Monthly check-ups became three-monthly appointments and then we were given a six-month reprieve. 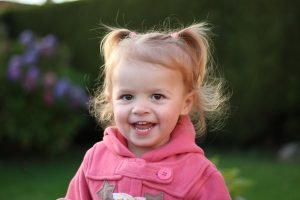 But in March 2015, we were given the devastating news that the obstruction to her left Ventricular Outflow Tract was worsening and we were potentially looking at Open Heart Surgery Number 4.

Fearing another long term admission, we planned for every worst case scenario…but Martha Grace is a little fighter!  Less than 7 hours after coming out of theatre and she was extubated. Two days after her operation she was moved out of Intensive Care and on to the ward. Martha Grace was served her eviction notice five days after surgery and was home in time for her big sister’s 4th birthday.

Martha will face many more operations in the future, her pacemaker needs replacing before the summer – but when I see her enjoying a cup of Babycino in our favourite cafe, or pushing a toy trolley around Hamleys with her big sister…I know that Martha enjoys a great quality of life. That is all I want for her.

We know that if Martha Grace’s heart problem had not been detected during our 20 week scan, she would not be here today. 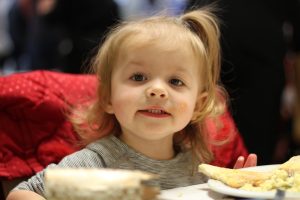 She came in to the world with a great pair of lungs and, to the outside world, looked perfectly healthy. If she’d been born at our local hospital we would have taken her home and she would not have survived. Even if her condition had been picked up before we left hospital, there would not have been enough time to search out the best treatment and she would have passed away.

Prenatal detection saved Martha’s life. Thanks to the skills of our sonographer, Sioned, who detected Martha’s defect, we have our beautiful little girl. There are no words to thank her.