Everything seemed fine at first. Zaki took his first feed from me. Not much, hardly anything really. But hey, he’d just been born, he needed a rest, so we let him off. When I attempted another feed around an hour later Zaki wouldn’t wake or attempt to drink at all. Not too worried, I told the midwife who was in the room at the time. She suggested we try with a syringe to get him interested and left the room to get one. It just so happened that there was a doctor outside when she opened the door who came to check Zaki over. I still wasn’t worried.

After around a minute, the doctor shouted outside that he needed help. He told the midwife that Zaki’s oxygen saturation levels were very low and then needed to get Zaki to special care immediately. There was absolute panic in his voice. I was crying now.

Zaki had been born with a congenital heart defect (CHD) called Transposition of the Great Arteries (TGA). Basically it means that his two arteries were in the wrong position and pumping blood to the wrong parts of the body. They needed to be swapped over and if wasn’t treated within 24 hours, Zaki would die. 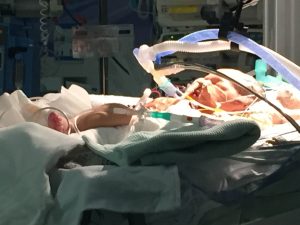 My baby boy was put into an induced coma and onto a ventilator. The air ambulance was called, and he was flown to Leeds General Infirmary within the first few hours of his life. We couldn’t fly with him, we had to say goodbye, knowing that it might be a forever goodbye. My heart was broken into a million pieces seeing his tiny body in that pod, knowing there wasn’t a thing I could do to help him. I put my trust in the air ambulance doctors who were amazing at trying to reassure us.

I googled like mad to try and find out as much as I could about TGA. I was comforted when I read that 90-something percent of babies born with TGA are successfully operated on and go on to live healthy lives with no need for further surgery. Zaki’s case was more complicated, although nobody knew why until the surgeons actually opened his chest and looked at his heart. But if your baby is born with TGA, the chances are, he or she will be fine.

We were told that Zaki would have a balloon septostomy performed to create a hole in his heart so that the blood could mix and more oxygen would be circulated around his body. Usually the balloon septostomy will buy time for a baby to grow and become strong enough for heart surgery, around 7-10 days after being born. When we arrived in Leeds we were told that the procedure hadn’t improved Zaki’s sats as much as was hoped or as much as it usually would. The doctors couldn’t work out why.

The next day was probably the worst because it really hit home what was happening. The doctors couldn’t understand why Zaki was so poorly. A consultant in the Peadiatric Intensive Care Unit (PICU) told me that “Zaki probably wouldn’t survive”. I looked at her blankly. She said it again. I nodded but I didn’t believe her. My brain wouldn’t let me believe her because it knew that if I did I wouldn’t survive. I was on autopilot. 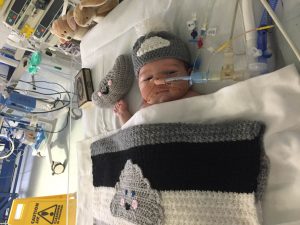 A few hours later she told us that Zaki was so ill they might have to operate as an emergency. It was decided the doctors would try everything they could think of to improve Zaki’s condition as much as they could and he would be operated on the next day.

By Day 3, Zaki’s whole body and face were extremely swollen due to the extra fluids that were being pumped into him.

We signed the consent forms. The surgeon and cardiologist spoke to us as length about the operation and the risks. I only heard “death, brain damage, organ failure”. Through my tears I begged the surgeon not to let him die.

The operation lasted 9 hours. It felt like days. For the majority of the time we sat in the waiting area of PICU. It was excruciating and, when the nurse finally came to tell us the operation was over, I was shaking, through anxiety and sheer exhaustion. 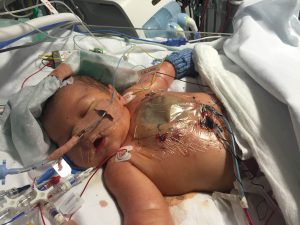 We were told that, upon opening Zaki’s chest, the team had found that he had TGA and 2 holes in his heart. But what was causing the biggest problem was his coronary artery, which was too narrow; a quarter of the size that it should have been. That’s the reason he had been so sick. The amazing surgeon, Stefano Congiu, the man I admire more than anyone else in the world, had managed to make it bigger but there was no guarantee that the surgery had been a success. He’d never performed this kind of surgery before. Newborn’s hearts are the size of a walnut, the suture the surgeon was stitching with was finer than a strand of my hair. That this kind of surgery can be performed at all is a miracle to me.

The surgeon told us that 1 in 4 babies in this situation would die. I immediately flipped that statistic and replied that that meant that 3 in 4 would survive.

While Zaki was in theatre his heart was stopped and he was put onto a bypass machine (called an ECMO machine) so that the surgeon could operate. But 2 hours after surgery, Zaki was put back on the ECMO machine. His heart was too weak after the surgery and couldn’t function. The surgeon told us that 1 in every 2 babies in this position would die. Again I flipped it and said “yes but that means 50% survive”. The odds don’t sound so bad when you put them like that, do they?

The number of consultants, registrars, surgeons and nurses caring for Zaki was overwhelming. Each of them really trying their absolute hardest to save my baby. I owe each of them, and the amazing NHS, so much more than I will ever be able to give.

Zaki’s surgeon told us that the maximum number of days he could be on the ECMO machine was 10. Each morning an ECHO (scan) was done on Zaki’s heart to assess the function. Each day we were told there was a slight improvement and that’s what we clung onto. As I walked down the hospital corridor on my way to PICU each morning I would beg and pray to God that the ECHO showed an improvement. 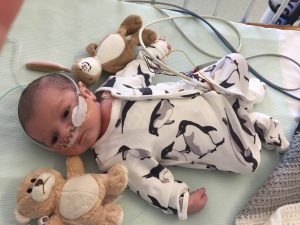 We were told on several different occasions that Zaki probably wasn’t going to survive and we should prepare ourselves for the worst; that he was deteriorating. But we always kept the belief that he could fight through it. I never once allowed myself to fully process that I might not be taking my baby home to meet his brother. And he was such a fighter, he always bounced back after each set back, his strength gave us strength.

After 5 days on the ECMO machine the doctors decided to try to take Zaki off it. It was another agonising wait, this time for 4 hours. But he came off it and his heart and lungs were now working, his body was working, with the help of a ventilator, a dialysis machine and too many drug infusions to count. I was ecstatic, I started to dare to think about taking my baby home one day soon.

Generally, things improved and improved from there on in. We had a few blips, a few blood transfusions, a few bad blood gas results and changes in medication. But we were starting to slowly relax and daring to believe he would be ok soon. His chest was closed 2 days after being taken off the bypass machine and as the sedatives were reduced he became more alert and opened his beautiful eyes on day 11.

My oldest boy, Omar, only just 2 himself, finally got to meet Zaki when he was transferred to the high dependency unit. 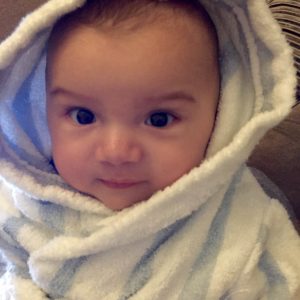 And after one week on the cardiology ward, Zaki was transferred to our local hospital to be weaned off morphine and oxygen, and establish feeding. There was talk of Zaki being discharged with oxygen canisters and his feeding tube still in situ but in the end he needed none of that. He started to take his feeds from a bottle, ditched the oxygen and exactly 6 weeks after he was born, on day 42, we went home.

It wasn’t all plain sailing once we got there. Zaki was prescribed (what seemed like) all the medicine in the world. It took me an age to prepare and administer it three times a day. He also had an undiagnosed cow’s milk protein allergy and vomited every single one of his feeds. Omar was confused and annoyed about being left for so long and I bore the brunt of it. Plus I was constantly (and I mean constantly) checking that Zaki was breathing and not blue.

Things have settled down a lot now. Omar loves me again and Zaki only takes two medicines a day. He’s also on hypoallergenic formula and gaining weight well. He had an appointment with his cardiologist this week, who was very pleased with his heart function and how he presented.

Neither Omar nor Zaki will remember those 6 weeks of hell when they’re older, thank goodness, but I can honestly say I’ll never be over it. Sometimes I look back and wonder how I got through the days. I think about the other children that were in PICU over the weeks. The boy that was brain damaged during his surgery, the baby that didn’t make it after her surgery, the 11 year old girl that had such a rare type of cancer nothing was known about it and her mother’s wails as she died. 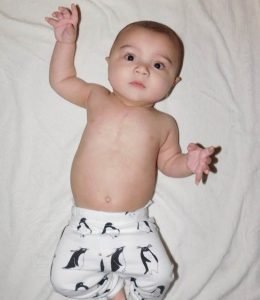 Me and my baby were lucky. I’ll never stop counting my blessings and I’ll never ever stop championing the NHS for saving my baby’s life.

In Zaki’s case we didn’t know that he had TGA before he was born, it wasn’t picked up at his 20 week anomaly scan and apparently around 50% of cases are not picked up prenatally. If we had known, Zaki would have been born in Leeds with all the specialised care available, rather than in our local hospital. It must have cost the NHS thousands to transfer Zaki to Leeds General Infirmary by air ambulance, money which could have been saved had we’d known about his TGA.

Tiny Tickers work is vitally important – training sonographers to pick up heart defects prenatally saves lives and a huge amount of heartache, for all concerned. Prenatal detection would have made our story very different.