Pheidippedes The Courier. If it wasn’t for you and your eager beaver attitude in running from Marathon to Athens just to deliver some good news (they won some battle or something) we could have all avoided this. Mate, you could have just sent a text. If one of the English messengers ran back from northwest France to deliver news of the 1342 victory against the Genoese, we could have all been training for a Brest right now. 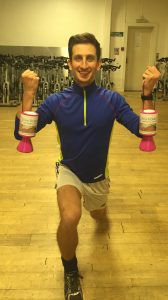 So Christmas was an interesting way to train. I can confirm I did not train on Christmas Day or Boxing Day or… ok let’s not pull at that thread. Oh and for me it only finished on the 7th January as my Serbian Christmas is then. Daley Thompson used to train twice on Christmas Day. I had two Christmas days and never trained once. I did get few runs in between those dates however, so I am building myself up for the Battle of London Streets in April.

Last week was my biggest week yet, I ran a total of 30 miles doing 5 runs a week. That is up from 3 runs a week in December. The long runs I have been embarking on (on Sunday I did my third half marathon) have given me the opportunity to find a nutrition strategy for the big day. Over a few hours of exercise I will be looking to consume some vital carbs at regular intervals to make sure my muscles have the energy needed to perform. In most cases, like in mine, these come from energy gels. I’m not quite sure what Pheidippedes used 2,500 years ago but maybe he just carried some potato filled pitas with him which he took chunks out of along the way. Good for him.

There is nothing worse than “hitting the wall”, an odd time for runners as their bodies feel like they have been abducted by science. Your legs start to feel like concrete, running turns to shuffling and, as your breathing becomes laboured, negativity engulfs you to the point of quitting. Nutrition is your shield against this. On my second half marathon, I started to feel like this towards the end of my run and I’m glad to experience a form of the wall now so I can best prepare for it on race day. I will plan to take on some gels every 40-45 minutes. It should be noted that these are not tasty snacks. I will not go to the cinema next time and ask for some isotonic, carbohydrate gels at the till. It is important to experiment with different gels to find which one agrees with you most. There is nothing worse than feeling like your digestive system is a handbrake as you’re trying to move forwards. 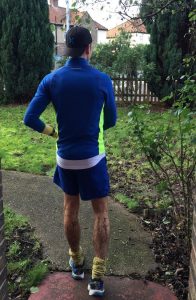 The longer the runs the more time you have to think about why you’re out there. My fundraising has started to gain momentum for Tiny Tickers. I’m not someone who is comfortable with asking for money but knowing the great work being done by this charity has turned me into a propaganda machine. Do not be surprised to see me with a Tiny Tickers sandwich board soon! So, if you are reading this, please visit my donation page  and help us out 😉

I have mentioned previously about the need for a strength program to underpin all the running and my training had become a pain in the butt. Literally my left glute started to flare up a few weeks ago after the impact of the running at the end of a couple of sessions. On the days the high impact running was an issue I swapped it for the lower stress of a cross trainer. It also made me tailor my strength programme to work more on the glutes and I have since, touch-type wood, not had the pain return.

Anyhow I shouldn’t complain too much about a bit of pain. Do you know what happened to our old friend Pheidippedes when he got to Athens? He died, thus stealing the glory from the victorious soldiers.

Apparently the cause of death was disappointment. He discovered that someone had leaked to results from the battlefield on their Facebook page. Silly boy.