On the 19th January, the All Party Parliamentary Group on Heart Disease (APPG) held an event at Westminster for MPs and Peers to learn more about living with heart conditions. Jon and Vicky from Tiny Tickers were there to represent the charity and to spread the message about CHD and the importance of early detection. 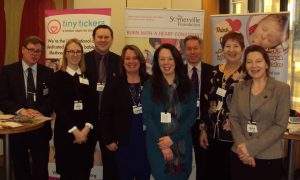 Jon and Vicky with representatives of the other congenital heart charities who attended.

“The event was a great opportunity to keep politicians up to date with our work and to tell them about the areas where we want to see change – including increasing prenatal detection rates and the introduction of pulse oximetry testing for all newborns.” – Jon.

Alongside Tiny Tickers, other charities belonging to the Cardio and Vascular Coalition were in attendance including the British Heart Foundation (which runs the event), The Somerville Foundation, The Stroke Association, Blood Pressure UK, Kidney Research UK and the British Association for Nursing in Cardiovascular Care. Vicky was impressed by the varied nature of the charities involved:

“Not only was it great to spread the Tiny Tickers message of the importance of early detection, it was fascinating speaking to the other charities in the coalition about how CHD can impact on people’s lives“. – Vicky 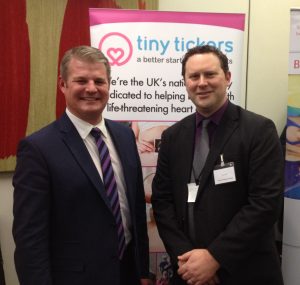 Jon with the chair of the APPG, Stuart Andrew MP

Stuart Andrew MP, chair of the APPG spoke with Tiny Tickers about the aims of the APPG which are to encourage the Government and the NHS across the UK to reduce the number of people developing preventable conditions, ensure people are diagnosed and treated quickly and ensure that everyone living with cardiovascular disease gets the care and support they need.