I found out that I was pregnant with my first child on Valentine’s Day 2015 and was absolutely delighted. We eagerly went to the 12 week scan and prayed that all would be well. However, our sonographer immediately noticed that there was too much fluid behind our baby’s neck – something that could indicate a chromosome defect or a heart defect. 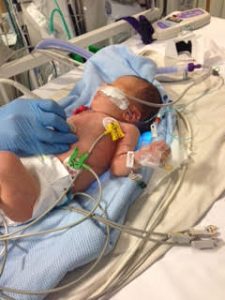 The NHS can only offer a test for chromosome defects from 16 weeks and this carries a risk of miscarriage, so instead we opted to go to a private clinic for a less invasive option. We waited weeks for the results of these tests. Negative! Massively relieved, we tried to relax and enjoy the pregnancy again.

At week 18 of my pregnancy we went for another scan to check the baby’s heart. It was at this stage that our baby’s heart condition was detected. Coartation of the Aorta (a narrowing of the main valve).

Devastated, the doctors and midwives tried to prepare us as much as possible and, on the 3rd October 2015, I gave birth to a beautiful baby boy, Oliver.

He was whisked away almost immediately on delivery and was looked after by the neonatal team at Princess Anne Hospital in Southampton. Oliver was then transferred to Southampton General Hospital’s PICU (Paediatric Intensive Care Unit) until he was stable enough to move to the children’s and babies’ cardiac ward. 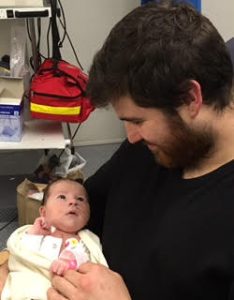 At just 4 days old (weighing only 6lb 6oz) our baby boy has his first open heart surgery. He would go on to need two further operations within his first month.

I can’t even begin to explain how heartbreaking it is to watch your little boy go through what Oliver went through. Three operations before he was a month old, numerous blood transfusions, blood tests, a lumbar puncture and, for a week, he was attached to a ventilator as he could no longer breath for himself. During his first week, we could give him no more than an hour’s worth of cuddles. It was the hardest period of our lives.

After 6 weeks and 1 day, we were given the wonderful news that Oliver could come home. Wonderful…and scary. No heart monitors or nurses? What if something happened? 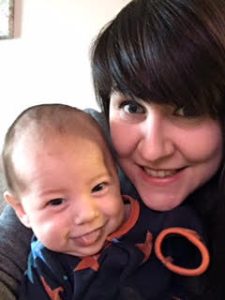 Oliver is now 14 weeks old. He is a very happy and smiley boy, and you have no clue of the trauma he has been through unless you caught sight of his neat little war wound.  At his most recent checkup in January 2016, he was given the all-clear for the next 6 months.  He does have two holes in his heart (VSDs) which means further open heart surgery will be needed at some point but, for now, we are just so thankful to everyone who has protected our brave little boy.

We owe such a huge amount to the sonographers who initially picked his heart condition up – without them we don’t know where we would be today.  Sonographers play such a vital role in detecting heart problems and this is the reason we support Tiny Tickers.