My daughter Tia and her heart battle

My daughter Tia was born in 2005, weighing 7lb6. I was 17 at the time, and had a very normal, healthy pregnancy. My scans had not given any cause for concern, and everything appeared to be normal.

But as soon as my little girl was born, at 12.27pm, we knew there was a problem.

Tia was blue and lifeless. She was immediately taken to the special care unit at our local hospital in Cheshire, but, without specialized equipment, it was impossible to diagnose exactly what was wrong. Her chance of survival depended on the allocation of a bed at a specialist hospital.

Every hospital in the UK was called but nobody could take us. We were just considering sending her to France when a bed became available at Leeds General Infirmary. 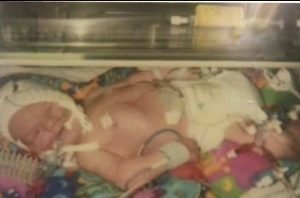 By this stage, Tia was very weak, and we were told to say our goodbyes.

Six hours after birth, we were on our way to Leeds and by 3am, we finally had our diagnosis. Tia had Tetralogy of Fallot with Absent Pulmonary Valve Syndrome – a rare congenital heart defect. I was utterly exhausted from the birth, the travelling and the stress, but I remember every word.

Again, we were told to prepare for the worst.

Tia grew stronger every day. By Day 4, I could finally hold my baby; soon after that, she was transferred to Alder Hey Hospital, a little closer to home; and then, two weeks later, we took her back to our local hospital. Slowly but surely she started to take feeds which was amazing – I could feed my baby! And at long last, with mixed emotions (very daunting to be on our own with no professional advice or monitors!) we were able to take her home. 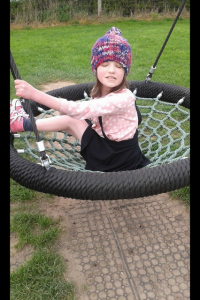 Tia did struggle with weight gain and so needed NG tube feeds until she was 3 years old. Then, in 2009, Tia had her first open heart surgery at the Evalina Unit in London. The surgery lasted six hours and then it was done, and Tia was asking to watch Peppa Pig! She was out of hospital within two weeks.

That was seven years ago. Tia will require more heart surgery soon but she is a very strong little girl. As she got older, it became clear that she had other medical problems and she was eventually diagnosed with a rare chromosome duplication disorder on chromosome 1. The only case worldwide.

Every day she faces a new challenge. I am in awe of her. She has defied all odds. And her strength continues to give me strength.

We are celebrating Tiny Tickers’ Heart Week this year by holding a party at our house.  Tia wants to help other babies born like her so she is baking lots of cakes. That’s my girl.