It was during the 20 week scan of my third pregnancy that my little girl’s heart defects were first detected. I had two healthy sons, Kaiden (4) and Bayley (2), but being told that my third child had a severe heart condition and would need full open heart surgery was truly devastating. Our whole world came crashing down.

We opted out of the CVS test for Down’s Syndrome (she had a 1 in 10 chance of having the condition) because of the risks to my baby, but were very relieved when the blood tests for Cystic Fibrosis came back negative. One step at a time.

The birth was duly planned. My baby would be born by an elective C-section in Glasgow’s Southern General Hospital at 38 weeks, and she would be transferred to Yorkhill Sick Children’s Hospital within 24 hours.

On 28th March 2013, Keira came into the world screaming, pink and, to the untrained eye, healthy.

But within minutes, she was in severe respiratory distress and flatlined. For 25 long minutes, the medical team worked tirelessly to bring her back. I will never forget those minutes before they managed to get her heart beating again. 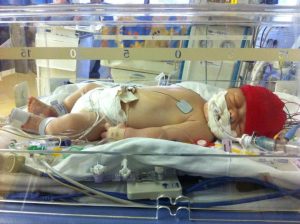 At 40 minutes old, Keira had an emergency septostomy procedure to keep the valves in her heart open until her heart surgery could be performed, and she was placed on cooling program to stop further damage to her brain.

The next 8 days were a blur of infusions, medications, ventilators and catheters but, finally, it was the day for her surgery.

Keira was put on a heart and lung bypass machine and we were told to try and pass the time. After 10 hours we got the call. The surgery had been a success and she was already off bypass. Relief flooded my body. I couldn’t wait to see my baby girl.

But nothing prepared me for seeing her. That little body covered in wounds and dressings. My heart broke all over again, but I knew she was a fighter.

A few days later, at two weeks old, Keira opened her eyes for the very first time and I was able to hold her. It was an emotional day! And at 21 days old, despite a few scares, we were given the all clear to take Keira home.

I felt such a sense of relief to have all my family together for the first time in three weeks. 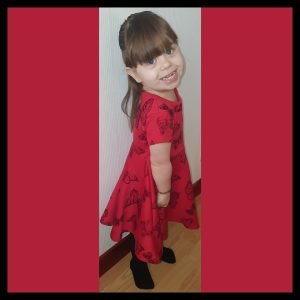 She had retained some fluid around her heart and lungs so we had another grueling 14 weeks while we waited to see if medication could sort this out. The risk was further open heart surgery. Thankfully the medication did the job and we could relax.

It’s been nearly 3 years and Keira is doing very well. She has regular check-ups, but we have just been told that she won’t need another one until she is nearly 4. A whole year without medical intervention! Wow!

Keira amazes everyone who meets her. She has mild brain damage and seems to catch every bug going, but she is here and that is all that matters. We are thankful to have her every single day. She is a joy to be around – and I think she might be the world’s happiest toddler!