Lyla was in heart failure before her heart condition was finally detected. This is her story, as told by mum, Janine.

My second daughter, Lyla, was born on 2nd September 2015. I had gestational diabetes throughout the pregnancy so was closely monitored because of the associated risks, and I had fortnightly scans. Despite Lyla not moving very much, nothing untoward was detected during her scans.

Lyla was born by C-section and she passed all the newborn tests with flying colours. But during our first night together in hospital, I began to have concerns. She wouldn’t wake to feed – and despite striping her down and changing her nappy, she wouldn’t rouse from sleep. This was a clear indication that something wasn’t right but nonetheless, the following day, we were discharged by a paediatric midwife.

At home, Lyla was very sleepy and she was panting. I felt deeply unsettled and anxious but when I raised my concerns to the visiting midwives, I was told it was normal. She stopped breastfeeding and appeared to have a blue tinge on her forehead and upper lip. The days passed and my concern began to escalate. Then, on day 11, she projectile vomited two of her feeds. I booked an GP appointment for the following day, assuming it was an allergy (her sister was lactose intolerant).

Our doctor checked Lyla over and listened to her heart, then her legs. He said he believed she had a heart defect called Coarctication of the Aorta, a condition he had diagnosed twice before, and that she needed to go to the local hospital in Northampton immediately.

Still oblivious to the seriousness of Lyla’s condition, we went straight to the children’s ward. After just 30 minutes of observation by the medical team, we were given the devastating news that our baby was in heart failure.

Lyla’s heart scan showed that she had a severe narrowing of the aorta. Her treatment would need to be started immediately. As we were transferring to the high dependency unit, Lyla stopped breathing twice and had to be resuscitated. I couldn’t believe what I was seeing. In the space of a few hours, my world had fallen apart – I thought we had lost my baby girl.

A second scan showed that the narrowing was getting worse by the hour and Lyla would need to be transferred to the nearest available intensive care – at The Evelina Hospital in London. All I could do was pray that she would get through the journey.

Arriving at the Evelina at 2.20am on 15th September, the medical team stablised her and, by 7am, they told us that Lyla would require open heart surgery and bypass. Her condition was urgent and the surgery would need to happen that afternoon. By this point, I couldn’t stop crying. Looking back on that day, it is all a blur. All I wanted was somebody to tell me that she would be ok, but of course, nobody could. 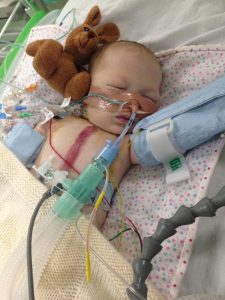 With Lyla in surgery, my husband and I tried to pass the time. We went for a walk along the Thames. Everywhere I looked people seemed so carefree.

By 6.30pm, Lyla was out and the surgery had gone well. Seeing my beautiful little girl covered in wires and tubes was desperately hard, but I was elated that she had got through the surgery.

It wasn’t an easy recovery, she had breathing issues and had to be put back on oxygen when her condition took a turn for the worse.  She was diagnosed with a vocal cord palsy as a result of the operation, a common complication which meant feeding had to be monitored. And she was diagnosed with laryngomalacia, unconnected to her heart condition, but it too affected her breathing.

Thankfully, despite these complications, she recovered well and we were able to take her home on 25th September (my birthday!) the best present I could have ever had. It was scary, she had lost weight and was tiny, she was only allowed small feeds and we had to be careful that she didn’t aspirate with fluid going down the wrong way.

For many nights I stayed awake until I literally couldn’t keep my eyes open, constantly waking and checking on her. 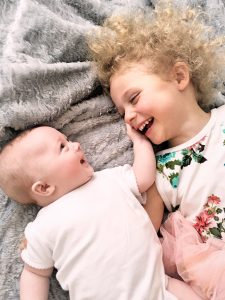 Lyla is doing really well now. She will have regular checks for the rest of her life to ensure that there is no further narrowing of the aorta and there is a chance she may require further surgery as she grows, but it’s unknown.

Her big sister, Lula, has recently had her heart checked too – just in case – thankfully she was given the all clear.

Lyla has had a dramatic first few months and we are very happy that she has come out the other side, but I do wish her heart condition had been picked up earlier. It never crossed my mind my newborn could have a heart condition, naively thinking if anything was wrong it would have been picked up in a pregnancy scan or in newborn tests. Detecting a baby’s heart problem early can give them a greater chance of survival and reduce the risk of other health problems. But it also means that families are given the chance to prepare for, what can be, a truly traumatic time.

Lyla started school last year and is doing amazingly, a normal child. I feel so lucky. She is fairly mischievous and tried to give the cat a haircut last week!

She had a check up last year and the consultant is very happy with her repair and valve. So they won’t need to see her for two years unless we have any concerns.