Carys White, a Radiographer from Kent, gave birth to her first child, Harriett, on 23rd October 2013 after a healthy pregnancy. But a murmur was detected at Harriett’s 8 week check. Here is their story. 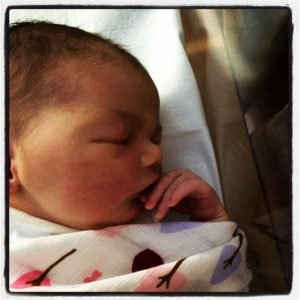 My pregnancy with Harriett was very normal – there were no issues detected during my scans and I was very active throughout, working up until 37.5 weeks. Throughout labour Harriett’s heart rate kept dropping which was put down to her position and then, post-delivery, to a short umbilical cord, but, once it got going, my baby girl arrived after only 30 minutes, entering my world crying her little lungs out.

Everything seemed fine – she immediately fed for an hour and passed all her checks with flying colours.  Feeding became more of a problem when we were in the postnatal ward. She was entirely disinterested, and it was almost 6 hours after her first feed when I finally managed to get her to take 1ml of expressed colostrum. We got amazing support from the team in the ward but Harriett was either not interested in feeding or, if we did manage to get her to eat anything (formula or expressed breastmilk), she would vomit it back up.

The paediatric consultant checked her over very thoroughly but, aside from the feeding, she was presenting as entirely normal and we were discharged after a couple of days. At home we continued to persevere, expressing and trying to feed her every 2 hours. It seemed to work as she returned to her birthweight by the 10-day health check and we began to relax. 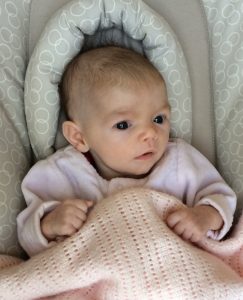 By two weeks old, Harriett had stopped gaining weight and continued to vomit after feeding. We tried every trick in the book to try and get her to feed and keep it down. Initially, the vomiting was diagnosed as reflux but, with my background and experience as a radiographer, I had my doubts. The worry returned. I was reassured by the GP that it was most likely to be a feeding problem rather than anything sinister and we were referred to the local feeding clinic.

Days turned into weeks and by the time Harriett was due to have her 8 weeks check and immunisations, I was very concerned.

It was during her precheck for the immunisations that our GP listened to Harriett’s heart. Asking us if we knew anything about Harriett’s heart problem, the penny dropped. My work has involved a lot of interaction with cardiac patients and children – suddenly everything clicked into place – she had a heart defect.

Despite not being blue in colour, a key sign of heart problems, Harriett was very pale and her heart murmur was significant enough for the GP to immediately refer us to a paediatrician for a second opinion. It was the Friday before Christmas.

After spending the weekend in our local hospital, we were transferred to the Evelina Hospital for an ECHO, and Harriett was diagnosed with multiple ventricular septal defects, an atrial septal defect and Patent Ductus Arteriosis.

It was scary but I knew that it wasn’t bad as it could have been as her conditions have relatively good outcomes. We were discharged in time for Christmas which, in itself, was hugely reassuring. 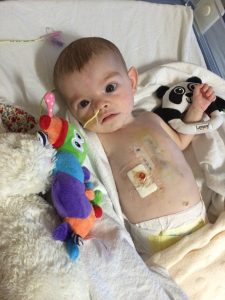 The focus then became to get Harriett strong enough for surgery by increasing her weight. However, by early January, it was clear that traditional feeding methods would not work as Harriett continued to vomit everything back up. Inserting an NG tube was the only option and we spent the next five weeks trying to stabilise her through feeds and medication in hospital. Despite all these efforts, it did not give us the desired results and the Cardiologist decided that we could not wait any longer.

Surgery day was set – 13th February 2014. She went in at 12.30pm with the hope that all the defects would be sorted out in one go. Surgery proved to be more complicated than envisaged and Harriett was in theatre for five hours. The team managed to close five of the holes, but had to leave four smaller ones that we are hoping will close as she grows up.  Harriett recovered very well and was discharged seven days after the operation. I still can’t get over just how quickly she bounced back.

Naively perhaps, with surgery over, I thought things would get easier as we renewed our focus on Harriett’s eating. The immediate threat to Harriett’s health – her heart – was fixed, but getting Harriett to feed was perhaps even more of a challenge. We genuinely tried everything but her gag reflex was very sensitive and anything would make her sick. At 9 months we nearly lost her again when she choked on her own vomit.  Thankfully between us and the paramedic team we saved her.

We started weaning her at just 18 weeks but, even at 18months, Harriett barely took anything more than a very smooth puree. 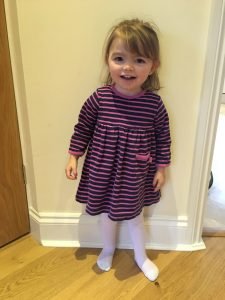 Feeding has been all-encompassing for 2 years. Harriett has seen so many specialists – dieticians, speech and feeding specialists, allergy specialists – and we have slowly seen progress. Now, at 2½ years old , she can eat sandwiches, cheese, pasta… her appetite is still very small and we continue to supplement her diet with a high calorie milk just to ensure that she continues to gain weight.

Having said all of that, great things come in small packages and Harriett is certainly that. From the moment she was born, she has proved to be a fighter and we can see that in her personality more and more. She is feisty, very charming and chatty – and has become a well-known face in our local hospital!

I have been a Radiographer for 14 years and so have a greater-than-average knowledge of heart defects – a knowledge which I think has been a blessing. I drew strength from my understanding of the anatomy of Harriett’s heart and my familiarity with the skills and abilities of the team looking after my baby daughter.  My husband, who is not from a medical background, didn’t have this safety net of information and understandably felt much more helpless.

We have been through a hugely dramatic 2½ years since Harriett was born. Her condition wasn’t diagnosed during pregnancy and there is no question in my head that antenatal detection offers the best chance for the baby and family.

The pressure on Sonographers to identify heart and other anomalies is so great. Tiny Tickers offers support and training to Sonographers, helping to increase their knowledge, understanding and confidence. But Tiny Tickers also offers knowledge to us, as parents, to take an active role in this scan through their Think 20 information. The 20-week scan is exciting – you can take some photos home and perhaps find out the gender of your baby – but ultimately, for the Sonographer in the room with you, it is an in-depth and complex clinical process. Anything that can be done to educate us all about the importance of the 20-week scan is vitally important.