Paula’s little boy Noah was born with a heart defect which was only detected as a result of extra monitoring Paula was given because of her own heart condition. This is their story.

I was born with a heart defect and so am probably more aware than most about heart defects, and what they mean. I had a coactation of the aorta, a VSD and a double outlet of the right ventricle, undiagnosed at birth and I went into heart failure at 21 days old. I have had four open heart surgeries to correct everything and still undergo yearly check-ups. When I got pregnant, I knew that there was a 2% chance that my child would be born with a heart condition but, when no defect detected during my baby’s 23-week pregnancy scan, I hoped for the best.

Noah was born on 31st December 2015 in St Mary’s Hospital in Manchester and, despite a small heart murmur being detected, passed all his newborn tests. 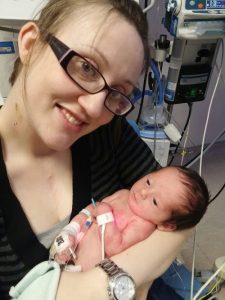 My heart history meant that I would have to be monitored for 5 days post-delivery and, as an extra precaution, Noah would be monitored at the same time. Both us would have a heart scan before we could be discharged.

All of Noah’s initial observations came back normal. However, one thing was playing on my mind – his feeding. He seemed to struggle to take the smallest amounts of a bottle and would fall asleep easily; he didn’t wake for food either. I voiced my concern to the medical team but was reassured that he was taking enough food for his size and not to worry. I put it to the back of my mind and tried to make the best of our time together in the hospital.

Day 5 came. 5th January 2016.  One of the worst and most frightening days of my life. My heart scan had gone well and I’d received the all clear.  It was Noah’s turn. The scan went on for what seemed like ages and I knew that something wasn’t right.  I heard the words I had dreaded, “coactation” and “VSD”, and knowing exactly what they meant I couldn’t help but start to cry.

At that moment, Graeme, my husband, turned up with Noah’s car seat in hand, excited to take us both home. I turned to the consultant “Noah’s not coming home today, is he?”. She shook her head, confirming my worst fears. Noah had a severe coactation of the aorta and a VSD. He wasn’t displaying any signs of being unwell because the duct that had been supplying blood flow whilst I was pregnant had stayed open and was helping the aorta to transport blood. There was no way of knowing how long this would be the case and what would happen once it started to close. 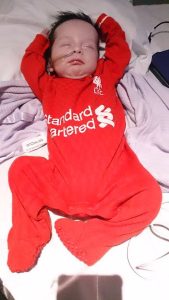 Noah was taken straight to the Neonatal Intenstive Care Unit and placed on prostin, a drug that would keep this duct open until it was decided if, or when, he would be operated on.

I knew about the 2% chance, but I never imagined that it would be my baby.  I was devastated and blamed myself completely. I was also angry that my anomaly scan hadn’t detected anything. Finding the defect at 23 weeks would have been prepared us for what was to come. I visited Noah every day, and every day I cried when I left him, my tiny little baby boy had never seen the outside world and already had a battle on his hands for survival. It was heartbreaking.

After 9 days in Manchester Children’s hospital, a bed became available in Alder Hey Children’s Hospital where Noah would have his operation. Believing Noah’s surgery would take place on the 12th of January we prepared ourselves for the longest day of our lives. However, it would be another two weeks of waiting after he contracted a suspected infection.  During these two weeks, his duct started to close and they had to increase his medication, increasing the risk of apnea among other things. Finally on the 26th January 2016, Noah had heart surgery.  We had to wait for 8 hours until we finally got the call; Noah had come through the operation and was recovering in intensive care. Seeing my little boy lying there so small and swollen, covered in tubes, was overwhelming. He had never really looked ill before this day and it is a picture that will be forever etched on my mind. But I knew he now had a fighting chance. 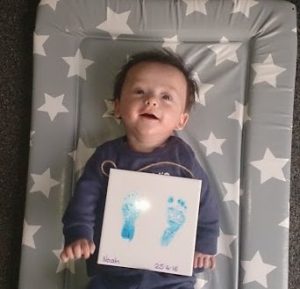 His recovery was not a smooth one. At midnight the evening following his surgery, Noah deteriorated. He had a blood clot in his chest cavity which had caused his ventricles to struggle to pump. The surgeon relieved the pressure and left his chest open to give his heart the chance to recover. For the rest of that night I worried that he wouldn’t make it but my little Noah is fighter. On the 13th February, when Noah was 6 weeks old, I got the news that I sometimes feared would never happen –  I could finally take my little boy home.

Three months later and Noah is doing well. He is still small after living on fluids for a lot of the time he was in hospital, but he is gaining weight steadily. His medical team don’t expect him to need any more surgery but he will have checkups for the rest of his life. It’s my job to minimise any affect this will have on him growing up.

The work of Tiny Tickers is vital for babies like Noah.  I was scanned in pregnancy but, due to the complexity and position of Noah’s condition, it was not picked up, even by a heart specialist consultant. Sonographers need to have access to the best training and equipment so that more babies’ lives can be saved.  I was so lucky that Noah had a scan before he was discharged – I can’t bear to think what would have happened without it.