Isabel’s heart defect was detected at her 6 week check up and she had open heart surgery at 6 months old. Mum, Karen, bravely tells her story here.

Isabel was born on 11th November 2010. My whole pregnancy had been ‘normal’ with no problems, all our scans and check-ups had gone without a hitch.

It was at Isabel’s 6 week check that this changed.

Our GP thought she heard a slight heart murmur and referred Isabel to Sunderland Hospital as a precaution. Six weeks later, I took Isabel for her ultrasound appointment. I can vividly remember standing in the room watching her heart on the screen, with no understanding of whether what I was looking at was good or bad.

And then the news – there was a hole in my baby’s heart. Isabel had a heart defect.  My whole body immediately felt numb. It’s a feeling that I’ve never felt before. The consultant explained that sometimes these things can correct themselves depending on the size, but sometimes they do need surgery. Isabel would be checked by another consultant at The Freeman Hospital in Newcastle. I left the hospital with an information leaflet on Ventricular Septal Defects, what they were and how they were treated.

Around 6 weeks later Isabel had her appointment at Newcastle. Another scan and more bad news. They confirmed my worst nightmare. Isabel’s hole in her heart was bigger than originally expected, 6mm to be precise. A defect of this size would require urgent open heart surgery. Our world crumbled. 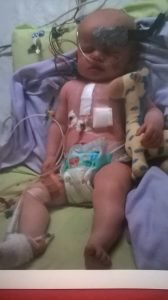 We waded through all the consent forms which detailed the side effects and problems associated with this type of surgery, and we left the hospital with the understanding that Isabel would need to have the operation within the next couple of weeks. We should wait for the call.

Over the next few weeks Isabel was admitted six times for surgery but unfortunately, due to emergency organ transplants, each time it was cancelled and we were sent home. I have never experienced stress like it.  Each cancellation was awful, having to go back home and wait for another call. Explaining all of this to our older daughter Molly, who was only 7 at the time, was extremely difficult.

As the days passed, Isabel’s heart began to weaken, she stopped feeding properly and began to lose weight. She had very little energy and always had cold hands and feet.

But finally, on the 20th May 2011, my husband and I left Isabel on the operating table at the Freeman Hospital. Five hours later the nurse rang to say the surgery had been a success and we were to go straight to Intensive Care to see her. As a mam, it was one of the hardest thing I’ve ever had to do. I walked in to see her lying on a bed surrounded by machines. She looked so small and so poorly. But we were assured that she was doing really well.

The next morning Isabel was given another general anaesthetic to enable the doctors to remove two drains. Once that was done she was moved to the high dependency unit back on the ward. We were over the moon!  The difference in her within 24 hours was remarkable. Another 24 hours after that Isabel was back on the ward. All IV lines had been removed, along with the feeding tube, and I was able to give her a bottle. It was the best feeling!

Isabel stayed in hospital for 6 days and she was finally allowed home. Although 6 days may not seem that long, it felt like an eternity for us! 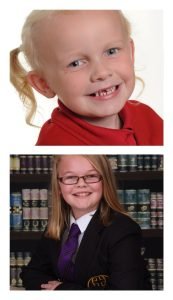 From that point Isabel started to thrive. She is five now and in her first year at school, which she absolutely loves! She has asked why she has a scar on her chest and why her friends don’t have one. We told her she has a ‘special heart’ and the doctor put a special plaster on it when she was a baby. Even though she is only 5 years old she already knows that her scar is a special part of her and that it is something she should be proud of.

There’s not a day goes by that I don’t think about how lucky we are to have Isabel. She is definitely my little miracle. Her consultant at the Freeman Hospital told me that without her surgery Isabel would not have been here today. She would probably have only survived no more than a few more months. The gratitude I have for every single person involved in making my baby better is overwhelming. I cannot thank our GP enough for hearing the murmur during Isabel’s 6-week check, or the staff and health professionals who cared for her.

I hope that by sharing Isabel’s story it may help just one person who is facing the same situation as we did. I know that if I had the chance to read someone else’s story five years ago, it would have given me some comfort.