The one where I did the London Marathon…

“Anyone sees me go anywhere near a boat, you’ve got my permission to shoot me.”

Those were the famous words from an exhausted Steve Redgrave after his success at the Atlanta Olympics. If you see me put on another pair of running trainers you’ve got my… Actually I wear running trainers to work everyday so I’m not quite sure this adds up.

This, my farewell blog, has been a long time coming. I’m sure there is a marathon comparison in there somewhere. I wish I could say it was worth the wait. Luckily, it is all still fresh in my memory and somehow there are people out there who haven’t heard about it, so brace yourselves. 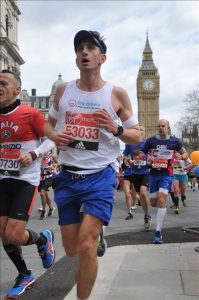 Fortunately for me, the marathon experience was breath-taking and overwhelming, particularly now that the money raised has topped £7,500! My target was £2,000 with a secret wish to get it to £3,000, so I am truly humbled to have had so many people support us so kindly. The backing of friends and family has been special and the money raised is all going to a truly fantastic cause at Tiny Tickers.

The carnival atmosphere of the London Marathon begins from the moment you board the first train on the way to the start. As your official bag gives you away, you start meeting all sorts on the way and they wonder who this weird Serbian man is who is banging on about Novak Djokovic to them. Somehow all sorts was the theme of the day with a variety of music pumping around the course. From reggae to bagpipes to the sweet sound of all sorts of people cheering, the soundtrack on this running track was magnificent.

Seeing your family and friends throughout the route is a fun experience. As they jostle and do everything short of firing a flare to alert you of their presence, your instinctive response back is convulsive waving as you narrowly avoid smashing fellow runners in the face. The effort of familiar faces with signs, friends on lampposts or friends with young children on their shoulders gave us the boost of a hundred energy gels. Piece of advice though, if you do make me a sign don’t put a background of a crowd of people on it, makes it harder to see in a crowd.

With names printed across the sweaty competitors tops they were all being cheered on by the masses though I spared those kind people the embarrassment of attempting to shout my name or even asking “What’s a Vojin?”

Once I got home I watched the TV footage of the day eagerly wanting to relive it. Or as it turns out live it. The TV was the first time I saw the Cutty Sark. Ran past it, remember that part of the course but completely oblivious apart from noticing a Nando’s. Eternally a culture vulture.

In my first blog in October I stated my super goal was to run three and a half hours. My finish time of 3:29:42 was a complete thrill and the training – over 600 miles in 6 months – had paid off. That feeling kept going until about a day later when the muscle soreness hit and my legs were more leaden than a box full of pencils but without any of the sharpness. It was absolutely worth it.

London you were great. Tiny Tickers you are amazing. Good luck to everyone and thank you once again for all the support.

Oh look someone I haven’t told about my marathon yet… 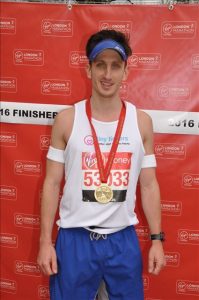