Laura  Townshend gave birth to her first child, Gillen, in June 2015. Unfortunately Gillen was born with a heart defect that wasn’t detected during Laura’s pregnancy. It was a collapsed lung which led to Gillen’s heart condition finally being detected. This is Gillen’s story, as told by his mum.

I’d been trying to get pregnant for a long time, so when we found out we were expecting Gillen in September 2014, I was absolutely delighted, but was very anxious about the possibility of things going wrong.

My 12-week scan wasn’t straightforward as our sonographer couldn’t see the nuchal fold and gave up trying to find it. At the time I didn’t really think much of it, but I now know that this can be an early indicator of heart problems.

As I was so anxious about the pregnancy, I went into the 20-week anomaly scan with my eyes wide open. I knew that it wasn’t just about discovering the gender of my baby – and I listened carefully as our sonographer checked over my baby’s organs. When they said, “There’s the heart. I can see all four chambers, so that’s all fine…”, I was very relieved. Everything else looked good too and we were delighted to discover that we were expecting a boy. 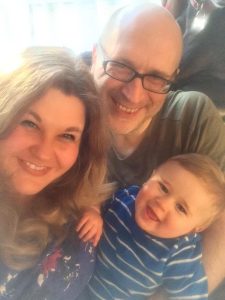 Weeks passed without incident until I started to notice a few periods of reduced movement from the baby. As I was aware of the ‘Count The Kicks’ campaign, I knew it was important to get this checked out. After several episodes of this, I had to go into our local hospital fairly regularly – at one point, twice a day – so that they could keep a close eye on me and my baby. This included an extra scan and frequent heart traces. But still no heart problems were detected.

After a long labour, my gorgeous boy, Gillen, arrived on 10th June 2015, delivered by ventouse. He was the most beautiful thing I’d ever seen and it was love at first sight! However my relief to hear his first cry was short-lived… I got to hold him for just a few short minutes before he was whisked away from me, as my midwife was concerned that he had quite a rattley cry and that his colour was rather dusky. The paediatrician was called in and, after some hushed conversations, he was immediately taken away to Intensive Care.

After what felt like days, we were told that our baby had been diagnosed with a pneumothorax (or collapsed lung). The medical team treated his lung and waited for him to get better – but he didn’t. As they didn’t know why the issue wasn’t resolving they told us that we were being transferred to the John Radcliffe Hospital in Oxford for further tests.

On arrival, it quickly became clear that the pneumothorax was the least of his problems and that things were much more serious than originally thought. We began hearing the word ‘cardiac’ and, when we overhead one of the doctors say “transposed”, my husband Googled it and found out about Transposition of the Great Arteries (TGA), a congenital heart defect.

This was the condition that Gillen would have to face.

He also had a ventricular septal defect and an atrial septal defect – two holes in his heart which, we were surprised to learn, were a good thing, as they had kept him alive by allowing his oxygenated and de-oxygenated blood to mix. I never thought I would be grateful that my son had a hole in his heart!

His condition could not be treated at the John Radcliffe Hospital, so we were transferred again – this time to Great Ormond Street Hospital. It’s a household name and a wonderful hospital, but we were entirely unprepared for the practicalities of being transferred to inner city London. Where was the car park? (There wasn’t one!) Where could we stay? How long would we be there? What did we need with us? It was thanks to the support of the Sick Children’s Trust, a charity that provides free accommodation to families with children in hospital, that we could both stay nearby until Gillen was discharged.

As we only had one change of clothes with us, we had no choice but to face Oxford Street on a Saturday in June to buy spare clothes for us and Gillen. It was a surreal experience and I felt completely detached from the thousands of people around me – all happily enjoying their summer weekend. 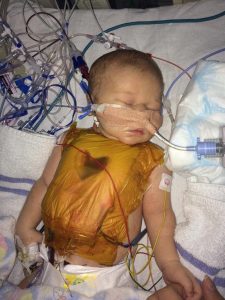 In the midst of all this, we tried to introduce some normality – feeding, nappy changing (which was more challenging than normal, as we had to avoid all the wires still attached to his little body), cuddling. It was fabulous to finally get those cuddles that we’d missed out on early on, especially as my husband hadn’t even had a chance to hold him after he was born.

Gillen’s surgery was booked in for 19th June 2015, 9 days after he was born. We were told that it would likely take 4-5 hours. By 5½ hours, we were beginning to worry, so when we finally heard that Gillen had come through the surgery, I broke down sobbing in the middle of the Great Ormond Street Hospital canteen. So many emotions – relief, fear, exhaustion, helplessness – came tumbling out after what was the most stressful day of our lives.

Thankfully it was a case of onwards and upwards from here, with small victories everyday – reduced adrenaline levels one day, oxygen levels improving the next – it was these little wins that kept us going.

Our amazing, brave little boy was so strong and such a fighter, and it never failed to astound us just how incredible he was. It was truly astonishing just quickly Gillen could recover and his ability to bounce back was unbelievable.

We were finally transferred back to our local hospital in Milton Keynes, where we concentrated on establishing feeding. We were all so desperate to go home and, despite being massively grateful to all the medical teams that had saved Gillen’s life, we couldn’t wait to escape and settle into family life.

On the 30th June, when Gillen was about three weeks old, we got to go home. And aside from a small infection on his wound, he has gone from strength to strength.

That was almost a year ago! Now our little superhero son is a handsome, funny, strong, healthy boy who loves bouncing, mischief, music and attending nursery! 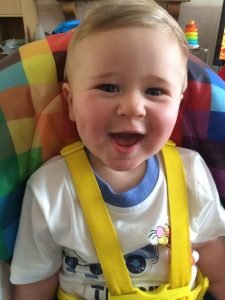 Prenatal detection wouldn’t have altered Gillen’s condition, but it would have made a huge difference to the heartbreak, stress and shock we experienced. We would also have been much more practically prepared, as well as emotionally. Without the pneumothorax (which was actually a blessing in disguise) and the extra monitoring which resulted from it, Gillen’s heart defect may not have been detected. When I hear about babies who are sent home with an undetected heart condition, or tragically pass away, my blood runs cold.

If this is a condition that can be detected, then I believe that the NHS should be ensuring that wherever possible it should be. The outcome of our story could have been so different and I feel so lucky that it worked out well in the end. Perhaps if I’d had the Tiny Tickers 20 Week Scan Big Tick List when I was pregnant, I would have got a more thorough examination. I’ll certainly be bringing it along for any future pregnancies!

I wanted to share my story to help raise awareness, but also to offer comfort and support to any families who are facing a similar situation.

As I’d taken such comfort from talking to other parents of children with TGA, I decided to set up a meeting for TGA parents in the UK. It’s free and is taking place in Milton Keynes on Saturday 17th September. To register your attendance or for more information, visit: