Anni already had two sons when she found out she was pregnant in April 2014. During her 20 week scan, her sonographers picked up a problem wither baby’s heart. This is their story.

In April 2014 we found out that we were having a baby. With two sons already, we waited excitedly for our 20-week scan so that we could find out if we were finally having Team Pink.

The day of our scan arrived. The sonographer said that the baby was lying awkwardly and she was unable to get a clear picture. She went to get a second sonographer. Looking back, I should have known then that something was amiss, but neither of us suspected anything could be wrong (because, well, why would it be?).

The second sonographer scanned my stomach in silence before quietly consulting with her colleague. That’s when we knew something was wrong. Seconds later (although it felt like hours) the sonographer said “There’s a problem with your baby’s heart.”. My world came crashing down, I looked at my husband and his face said it all, I didn’t know what to say so I just asked “Is it a girl?”.

The sonographers had detected a VSD (hole in the chamber) and noticed that the left side of the heart was smaller than the right. 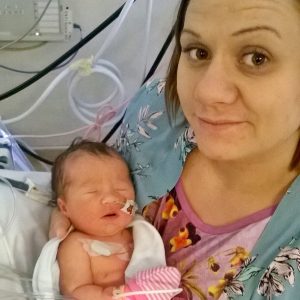 Three days (and a lot off googling) later we arrived at the Royal Brompton Hospital for our follow up scan, armed with questions and research. The scan lasted about 45 minutes. We watched as the experienced fetal cardiologist shouted out various numbers and measurements. Afterwards we went to a quiet room where the cardiologist and a clinical nurse specialist explained their findings.

Our daughter had a rare condition called Left Atrial Isomerism, which had resulted in a number of congenital heart defects:

Other organs had been affected too – her stomach was central, she had a midline liver and, although we didn’t know much about her spleen at this stage, it is common that babies with left atrial isomerism have more than one spleen. 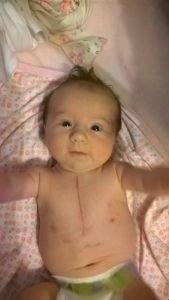 We would have to wait until delivery, and her treatment would start as soon as she was born.

I remember feeling my baby girl move inside me and just being in disbelief that there could be anything wrong with her. It was terrifying.

Telling people was very difficult – we were bombarded with messages after the initial 20-week scan – and we didn’t know what to say.  At that stage we didn’t know if she was going to make it through the pregnancy and so finding the words to tell people was really hard.

Family and friends rallied round us and smothered us with love. People wanted to help but they didn’t know how. For us, just knowing they were there meant the world.

On the 23rd November 2015, I gave birth to our little girl. India was born pink, breathing and at a respectable 8lb 1oz.

Just 4 days later, she underwent open heart surgery to repair the coarctation and hypoplastic arch. She was cooled down to 18 degrees and put on a heart and lung bypass machine. They also had to stop her heart for a time to do the repair. It’s a horrible feeling knowing how close your child has come to death.

We were finally able to take her home on 12th December and she got to spend her first Christmas at home.

India is now 6 months old and a bright and gorgeous baby. From the outside she looks like any other baby – it’s often hard to remember that she has such a complex condition.

We don’t know what the future holds for India as her condition is very unpredictable, but we do know that she only has a future because her heart defects were detected early.

India would not be here today had our sonographers not noticed a problem. Part of her condition meant that no blood could flow to her body. She was completely dependent on the duct that links from the placenta. Without prenatal detection, I would have given birth to my little girl in our local hospital, not realising that she was reliant on my placenta to stay alive. 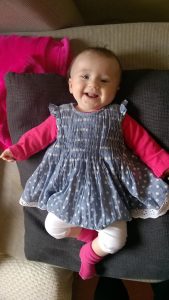 I was shocked by how common heart defects are, and how varied they can be from child to child. India’s condition was detected prenatally so her medical team could prepare. And we were able to research her condition, read case studies and stories, and understand the risks involved – we were fully armed with as much knowledge as possible. I want every family facing a similar situation to have the same chance to fight back.

Tiny Tickers gives families that chance – through increasing prenatal detection rates, raising awareness of the issue and signs of early heart failure in babies, and providing support to families like ours, they are helping to provide a better start for tiny hearts.

That’s why a group of my friends and family are supporting them through a range of activities – everything from a half marathon to a car boot sale. I am honoured to be able to give back to Tiny Tickers and the other charities that have helped us in the past 6 months.