In Memory of Rory – Ride100, by Richard Hall 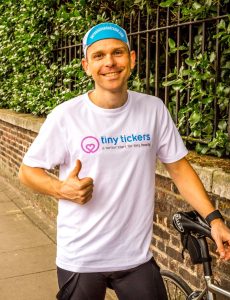 Nothing prepares you for the moment when you find out that your baby has a heart condition, irrespective of severity.  Those of you reading this might know, or know someone, who has had to learn that difficult news.  Your world falls apart and you desperately search for hope. Together my wife and I made the decision that was right for our son.

As time passed we decided that we wanted to do something overtly positive in his memory. Grief is a terrible and powerful force which has many aspects. We both wanted something that was difficult, a challenge beyond our norm.  Having never run more than 10km before, Sarah signed up to the St Alban’s ½ Marathon – a notoriously hilly course (which she conquered beating her target time).  I signed up for my first Triathlon but the real target was completing the London-Surrey century ride.

Sunday 31st July saw the 4th year of the 100 mile bicycle ride take centre stage in London.   No cars or pedestrians – just bikes.  Due to the huge impact this causes, it is a very unusual benefit and brilliant experience, for anyone who takes part this “sportive” or organised cycle event.

In reality a sprint Triathlon, while a brilliant experience in itself was not ideal preparation for a long distance bike event. Nevertheless, with the back drop of the Tour de France for inspiration I joined my local bike club and started to get some decent miles into my legs.

Before I knew it race day had arrived. The night before I couldn’t sleep, a mix of nerves and anticipation, I had memories on my mind.

4.40am. My alarm wakes me and I know I have 20 mins to get up and get out the door to ride from my brother’s flat to the start line at the Olympic Village. Along with 26,000 others, I arrived and stood in the morning’s cool air for an hour waiting to be released.

At 6.35am Green Wave G was a go. I could hear the distinctive “beep” as riders all around me started their Garmin’s devices.  The city was silent and for the first 10 miles all you could hear was the whirl of wheels. It was beautifully simple. Full of energy, there were large smiles all around.  My folks live in Surrey and I knew they would be road side around the 40 mile mark – my first aim for the day. Having split from a few club riders I knew who wanted to briefly stop at the first feed station, I pushed on. 2hrs in, I saw Mum waving a couple of Union Jacks and a beaming smile on her face.  At the time I didn’t realise the enthusiastic flag waving also the signal for my Dad, 50m further up the road, to take a few shots of me “in action”!

Richard on the left, with his mum frantically waving her Union Jacks !

Little did they know that my legs were already starting to feel the burn.  Shortly thereafter the first teaser climb at Newlands Corner (4% gradient) was a surprising but welcomed arrival.  The short and steady rise was just what I needed to change the pace and have something to work against.  Ten miles further down the road, past another one of the well positioned feed stations, lay Leith Hill. While Box Hill has been made famous in recent years, Leith Hill is the well-known to the locals around Surrey Hills as the harder and more aggressive climb.  While Box Hill’s steady 5% gradient is spread over 2.7km, Leith Hill’s average gradient 6.5% and max of 12.5%, is only 0.4km shorter than Box.

As you can imagine, this meant a fair bit of congestion on the climb itself, with slower riders staying on the left and swifter climbs passing on the right – if at all.  While both climbs have fast downhill sections following them, riders experience very different surroundings.  Leith Hill’s decent is down a narrow dark tree covered lane (passing the 60 mile marker) while cresting Box Hill opens you into a view over the whole of Surrey.  Irrespective of the differing views, feeling the wind cooling my face as I picked up speed and enjoyed a brief break in my cadence, was a welcome relief.

The run back into London was one I will never forget.  One of the key aspects of cycling 100 miles is taking on the right level of nutrition and water. Get this wrong and it’s not much fun! With 10 miles to go my legs were screaming and my water all but gone.  However, the end was in sight and having come this far I knew I would make it.  Now it became about the clock. I had hoped to finish in a time sub 6 hours.  Head down, body low, I attempted to ride in the most aerodynamic position I could manage – knowing that while uncomfortable I would travel further faster.  Cyclists flew by and past in equal measure as they worked as part of randomly formed “trains” of riders, all surging for the end.  This helped pick up my speed and as we swung onto the riverfront in West London I couldn’t but help be overwhelmed.  I carry Rory in my heart always and as I rode along the city street I knew so well, tears fell.

The Mall approached and with it we heard thousands of supporters lining up towards Buckingham Palace and the finish line caked in summer sun.  I got out of the saddle, willing my legs to work harder still forcing the pedals faster. As the finish line loomed the aches and pain disappeared momentarily.  I was alone in my relief as I lunged for the line. Why, I am not sure, as I was in a sprint against no one but myself.  However, in that moment I felt I owed it to him. To push all the way till the very end. To do the best I possibly could.

The sun was shining as I slowed in front of Buckingham Palace and I was once again surrounded by happy people. Cheering, laughing and taking photos.

I looked for Sarah.  As she came running towards me through the trees, smile on her face, all I felt was love.

We have been hugely humbled by those kind people who have donated towards this challenge in support of Tiny Tickers.  A special Thank you from Sarah and I. 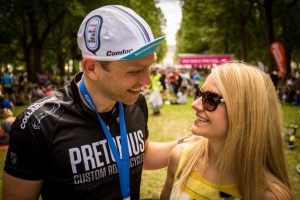 Thank you Richard and Sarah, from all of us here at Tiny Tickers