Rocco, our heart warrior- and the patron saint of health

Rocco was born with a congenital heart defect – Transposition of the Great Arteries – that was detected during the 20 week pregnancy scan. Mum Lisa tells us their story, and gives thanks for her sonographer.

Rocco was my third pregnancy and everything started off normally. I had a little bit of morning sickness but all else seemed fine and my 12-week scan didn’t raise any alarm.

I went to the 20-week scan without my husband and was very relaxed, expecting everything to be ok, excited to see my unborn baby. But glancing up at the sonographer, my world flipped over. Her face said it all and I knew there was something terribly wrong. She took my hand and said “I can see a problem with your baby’s heart”’. The tears began to flow uncontrollably. Upon consulting with another sonographer, we had a diagnosis – Transposition of the Great Arteries or TGA. This extremely scientific name threw me into a sense of worry and panic.

I went home and read as much as I could – desperate to understand what it was and, crucially, why it had happened. Was it something that I had eaten or done that had resulted in this serious defect with my precious baby?

Two days later, we had further tests at St George’s Hospital in Tooting. As we drove to the hospital I hoped that we would be told there had been a mistake and the baby was in fact healthy. Sadly this was not to be, however we were told that my baby had ‘Simple’ Transposition of the Great Arteries, which meant that it wasn’t coupled with any other conditions. I clung on to the hope that, although extremely serious, the condition was fixable. The fact that our little one’s heart defect had been detected prior to birth, meant that he would be in the best possible place and receive the best possible care.

The weeks were long and daunting knowing that we were about to face every parent’s worst nightmare. I would have done absolutely anything for it to have been me and not my tiny little one who had to go through the surgery. 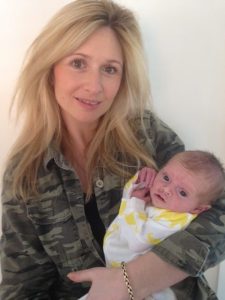 Lisa with Rocco, born with Transposition of the Great Arteries

A plan was made to induce me on Monday 24th February 2014 at University College Hospital in London, three weeks before my due date, and then transfer my baby to Great Ormond Street Hospital for the open heart surgery. But, whilst watching Saturday night television with my older children, then age 6 and 4, a couple of days before, my waters broke. I was blue lighted into London from our home in Esher, Surrey, in labour but so focused on making sure that my baby was born at UCH that I barely made a sound.  I was determined to be strong for my little one.

We got to hospital just in time and, much to my relief, I caught site of our wonderful consultant, who had reassured me throughout the pregnancy. Everytime I saw him, I came away with the belief that he would save my baby, it scared me too much to think differently.

I gave birth to a little boy and it was immediately obvious, even to the untrained eye, that he was very ill. He came out electric blue and the doctors struggled to perform a stent operation. Finally, after hours of waiting, they managed to stabilise him and he was transferred to the Intensive Care Unit. After five days, he was moved to Great Ormond Street, still unconscious. I never left his side, whispering to him that his brothers were at home waiting for him and we would take him home where he belonged very soon. At just 6 days old, on Friday 28th February 2014, our baby boy had open heart surgery. 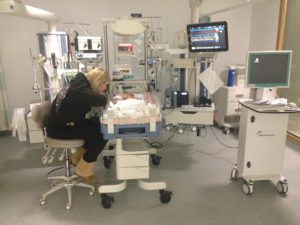 Lisa with Rocco in NICU

The operation took nearly 7 hours. The longest 7 hours of my life. My husband and I couldn’t leave the hospital – we needed to be close by. The hours passed and we just sat waiting and praying for the unit to call us. Finally, my phone rang, 15 mins sooner than expected. It was the medical team. I couldn’t bring myself to answer it and my husband picked up. His face lit up. I started to sob.

The surgery had gone better than expected. Our baby would go on to regain his strength. His colour changed and, hour by hour, more tubes were taken out of his little body. It was like a miracle unfolding. As relieved and thankful as I was, I didn’t feel like I knew my baby. I hadn’t had the chance to hold him, stroke him or even see his little eyes open. It was at this point we felt we could name him. Rocco Christopher, Rocco after the patron saint of health, and he was my little fighter, and Christopher after my youngest brother.

Six days after surgery, we were told that Rocco’s heart was strong enough and he could go home. I was scared – he still wasn’t feeding well – but the confidence that comes from having two other children kicked in. I could do this. And I did. Every day, I concentrated on building him up. Getting him stronger and stronger. My amazing family and friends were there every step of the way, helping me with my two other children so that I could concentrate on Rocco. 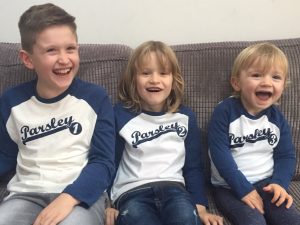 Rocco with his brothers

Rocco is now 2 years old and a wonderful little boy. I have no doubt that his 20-week sonographer saved his life. Her skills and expertise meant that she noticed the heart defect – and her compassion and kindness gave me strength I didn’t know I had.

On the first anniversary of my 20-week pregnancy scan, I went back to our ultrasound unit at Kingston Hospital to say thank you – only to discover that she no longer worked there. I had so wanted to give her a big cuddle. Kirsty, if you are reading this, thank you. For me, for Jon, for Rocco, for his two brothers and for all our family. I will always remember you and know that without a doubt you saved Rocco’s life. Thank you from the bottom of my heart.