Cassie’s second child, Finlay, was born with an undetected heart condition, Transposition of the Great Arteries. He was three weeks old, and already in heart failure, before it was finally diagnosed. Here is their story.

My pregnancy with Finlay was like any other. We already had a little boy so we knew what to expect. The scans didn’t raise any cause for concern and we went through the pregnancy blissfully unaware of what was to come.

Labour was quick and straightforward – he was a healthy weight and everything seemed to be fine. Except for his colour. His skin was tinged with blue but we were told that he was probably just cold and were advised to keep him wrapped up. Looking back and knowing what we now know, I can’t believe that we just accepted that as an explanation.

The first night alone in the hospital he barely slept. He cried and cried, I didn’t know what to do so I walked the dark halls of the ward, desperate for morning so that we could go home.

Establishing feeding was tricky. He continued to cry nonstop, all night and day, and he wasn’t gaining weight as fast as expected. My husband and I would take shifts at staying up with him at night and holding him upright to minimise the amount of screaming. I knew something was wrong but it is difficult to trust your instincts through the fog of newborn exhaustion and emotions.

After about a week I took him to the GP. They diagnosed colic and prescribed him with infacol.

Several days later, I went back again. This time we were given some Gaviscon for reflux and told to co  me back at the end of the week if no improvements. By which point Finlay would be three weeks old. Three weeks of crying and worry.

By the end of the week, exhaustion had got the better of me. I sat in the GP’s office and cried, desperate for help. She listened to me, checked Finlay over and assessed his weight gain. She told me she wasn’t happy with his colour or breathing and she was going to refer him to our local hospital immediately.

Upon arrival at the hospital, we were shown to a room on the ward (the ward we are all too familiar with now). A consultant came in, looked at Finlay and asked if he usually lies so still and quiet, obviously he never did. Unbeknownst to us, our child had gone into heart failure.

The next part of Finlay’s story is somewhat blurry.

The consultant transferred him to the treatment room. My husband and I followed where he began prodding and poking our son, inserting cannulas. It was an awful sight; one I try never to think about. I was broken, in tears and in shock, unable to watch what they were doing to my son. Little did I know that this was the moment they were trying to save Finlay’s life.

The medical team continued to do everything they could to keep him alive. He was in an oxygen box, while we waited for the cardiologist to arrive. 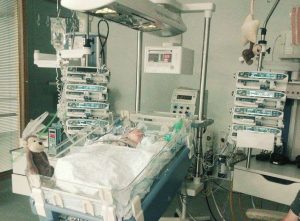 After an echocardiogram, Finlay’s diagnosis was confirmed – he had Transposition of the Great Arteries (TGA) – the arteries in his heart were the wrong way around, meaning no oxygen was getting to his body – and he had a number of holes in his heart. Miraculously, one of these holes had been keeping him alive all of this time but it started to close when we got to the hospital which was why he deteriorated so suddenly. Usually TGA is diagnosed in utero or straight after birth. Finlay was three weeks old.

A helicopter arrived and Finlay was prepped for travel. It was horrible to see him in the box, tubes in, machines breathing for him. He looked so tiny and helpless. 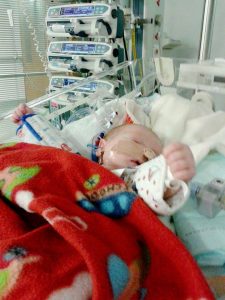 Upon arrival at Great Ormond Street Hospital, Finlay was rushed away and we were left to wait. A cardiologist came to explain his condition to us – drew some diagrams I didn’t understand and confirmed that a balloon septostomy would be needed immediately to recreate the hole that had closed, allowing the blood to mix again. This would buy him some time before the open heart surgery he would need to save his life.

Thankfully it was a success. Finlay regained his strength in ICU and, within a few days,  was strong enough to have his surgery.

We walked our baby down to the operating theatre, cradling him the whole way, and handed him over to surgeons not knowing if he would come back to us. It was an extremely long day. We walked for miles around London waiting for the call. After 8 hours, he was back in ICU.

We weren’t prepared for what Finlay would look like after surgery. He didn’t really look like my baby but he was so strong. And after eight days, we were able to take him home. 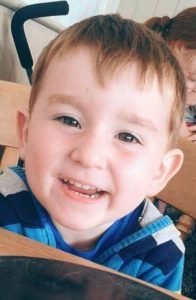 Since then Finlay has seen his fair share of hospitals but nothing  compares to what we went through when he was 3 weeks old. His heart is doing great and we expect it to stay that way for some time. Finlay is a very happy, cheeky toddler, and to look at him now you would have no idea that we very nearly lost him. He shows us every day how strong he is and we couldn’t be more is proud.

We were lucky. Finlay is still here but early detection of his condition would have made a huge difference to our story. The fear, worry and stress caused by an undetected heart condition cannot be measured. The cost of emergency care, including the air ambulance, could have been avoided. And the pain my little boy endured for three weeks could have been prevented.

The work of Tiny Tickers is vital. There were many opportunities for Finlay’s condition to be detected – both during pregnancy and when he was a newborn.  Working with Tiny Tickers, I hope to raise awareness so that new parents do not have to go through what we endured.