Boyce’s Story – a baby with undetected Coarctation of the Aorta

Boyce was born with Coarctation of the Aorta – a narrowing of the aorta, one of the main blood vessels in the heart. Unfortunately, his heart condition wasn’t detected during pregnancy or newborn checks. By the time it was detected, his body was already in shock. This is his story, as told by mum, Rebecca.

“It looks like you are having another boy.” The sonographer conducting my 20-week scan said.

“And everything looks fine as far as I can see.” She continued.

21 weeks later, after a very unproblematic pregnancy, I gave birth to our third son Boyce, a seemingly healthy baby boy. He was a very hungry little man and I was well experienced with breast feeding from my previous two children, so things got off to a great start. The midwifes even referred to me as the ‘queen of breast feeding’ which was quite appropriate as I spent a great deal of the first few days nursing Boyce.

Before we left hospital, all the routine checkups were performed. When the doctor listened to Boyce’s heart, he told me he needed a second opinion. Another doctor came over and also had a listen but then they both agreed that it was fine. For a moment I had considered the idea that something could be wrong with our baby, so now I breathed a sigh of relief. 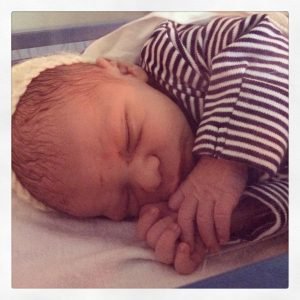 Coming home with baby number three turned out not to be very relaxing. My older kids and husband were excited and full of beans, trying to be helpful in every way. I was quite sore after giving birth and also struggled with baby blues so I was always very relieved when Boyce would wake for his feed and I could hide away somewhere quiet with him.

However after a week I started to become concerned as he seemed to be sleeping excessively, not waking regularly for feeds.

“That’s a good sign!” my husband and also the midwives told me “he is clearly getting more than enough.”

Boyce however kept sleeping lots and feeding little. During the night I kept waking up, not because my baby was demanding a feed but because my breasts were painfully engorged. A few times I woke up soaked with leaking milk. I was confused and couldn’t understand what was going on. What was I doing wrong? Whilst I longed for his next feed, thinking it would all be ok then, at the same time I also dreaded it, as I felt more and more scared that he would refuse me again. Sometime he didn’t even latch on and when he did it was often only for a short feed. I put it all down to my baby blues, that I was overthinking it and worrying too much but I just couldn’t relax.

On the eighth day the midwife came to see Boyce and me – I raised my concerns.

“Breast feeding takes a bit of time to fine tune.” was her answer.

But his weight had barely gone up and we agreed that I should make sure he would get lots of good feeds in the coming days to get him back on track.

“Should I try to wake him up if he is sleeping?” I asked, but the midwife didn’t think that would be necessary.

I felt silly for having gotten myself so wound up and felt momentarily reassured that everything was fine with Boyce.

But it didn’t last. I soon began to feel increasingly unsettled with my very sleepy baby. That evening I had a panic attack.

“I am scared out of my mind, it’s a matter of life and death!” I told my husband who eventually managed to calm me down and we agreed to call the midwife again next day.

In an attempt to be more rational about things I decided to start a feeding log both for myself and to show the midwife.

By the time the midwife came late afternoon next day the log had one entry:

The midwife raised an eyebrow at this but was still determined that it was a breast feeding issue and suggested skin to skin. When Boyce still determinedly turned his face away and refused to latch on the midwife appeared a bit alarmed for the first time. She started to examine him and when she took his temperature it was far too low at 35.4 C. At that point she called the hospital who told us to bring him in immediately.

The doctor in the hospital did not need long to find that there was something very seriously wrong, within seconds the room filled up with staff and it was suggested that we should wait ‘outside’. A lady took us to a small room where we waited for what felt like an eternity before we were sat down and told that our son was a very poorly boy and might not make it. We were allowed to go and see him before they took him to theater. 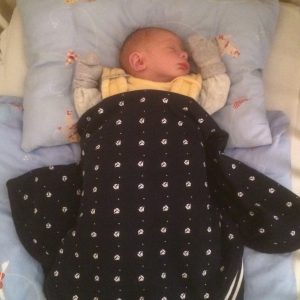 Boyce, aged nine days old, only hours before he had to be resuscitated.

Another agonizing wait later a doctor informed us that they had managed to stabilise Boyce. The relief was huge despite the daunting news that there was potentially something wrong with his heart, at least he was still alive.

We then got to see him again, rigid and covered in cables. He was connected to a ventilator and uncountable other machines. Despite this being every parents’ biggest nightmare vision, we were just incredibly grateful that we hadn’t lost him.

We now learned that when we brought him in to hospital he had been going into shock due to his heart problem and they had needed to resuscitate him. They explained that he was suffering from a congenital heart defect called ‘Coarctation of the Aorta’ and he would need heart surgery in the next few hours in order to survive.

He was blue lighted to Southampton hospital where he was taken to the Pediatric Intensive Care Unit. Next day they performed an operation on his heart and for lack of a better word ‘fixed’ it. 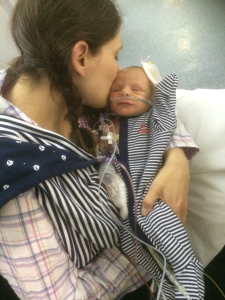 To our delight Boyce recovered with great speed. I held him in my arms 24 hours later and got to breast feed him myself again only a few days after that. We got to take him home one week after his surgery.

He was now a very hungry boy again, keeping me very busy with feeding night and day, but I could never complain about being woken up, I was just grateful.

One friend asked me a few weeks after it all happened “What does a baby in shock look like?”

The answer is frightening “No different to a normal sleeping baby.”

Another friend ‘tactfully’ asked if we took him to hospital because he turned blue.

“No, he never turned blue. He might have been pale but neither I, nor my husband nor the midwife saw anything much wrong with his colour.” 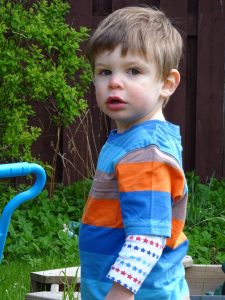 Boyce’s condition ‘Coarctation of the Aorta’ could possibly have been detected as early as in the 20-week pregnancy scan.  Early detection of heart problems makes a huge difference to both the baby and their families.  The consequences of Boyce’s defect going undetected were very serious and we could easily have lost him.

In the end I think it was motherly instincts that saved our son’s life, I only wish I had listened to them sooner. Especially when it comes to feeding; never underestimate your own intuition when you think something is wrong!

Boyce has since made a full recovery and is today a happy, smiley and very healthy two-year-old. He has annual check-ups to monitor his heart and blood pressure. We are forever grateful to the amazing team in Salisbury Hospital, PICU and the Ocean Ward in Southampton for what they did for our son.

Boyce is the star of the Tiny Tickers’ Christmas Appeal 2016. His story perfectly explains why our work is so vital. Your support allows us to continue to reach more babies like him and supporting more families. Please consider donating today.