Meet Oscar, and read about his fight against Tetralogy of Fallot

Oscar was born with Tetralogy of the Fallot, a complex congenital heart defect. Thankfully, it was detected during his newborn tests meaning that his mum, Katrina, knew what signs to look out for. Here is their story.

Katrina already had a son, Olly, when she and her partner, Kevin, decided to try for another baby. They had no trouble getting pregnant and the nine months of pregnancy passed without incident.

On 8th April 2015, little Oscar arrived by emergency caesarean section and seemed perfectly healthy. However, the next day, during Oscar’s newborn tests, the medical team noticed a heart murmur. Although relatively common in newborn babies, Oscar’s doctor decided to investigate further. Fortunately, there was an ECG machine in the ward, and Oscar was sent for an echocardiogram that revealed he had a congenital heart defect – Tetralogy of the Fallot.

Katrina was in complete shock. Her little boy had been feeding well, his colour seemed fine – she couldn’t believe this was happening to her baby. Why Oscar? Katrina blamed herself – thinking it was choices that she had made during pregnancy that had led to Oscar’s condition.

Tetralogy of the Fallot usually does not require immediate surgery, so Oscar was sent home from hospital and began to settle in with his new family. The doctors explained the condition to Katrina as soon as Oscar was diagnosed, but she couldn’t take any of it in at the time. It was only a month later, at their first cardiology appointment, when the fact that her little boy would require open heart surgery at 6 months old became real. 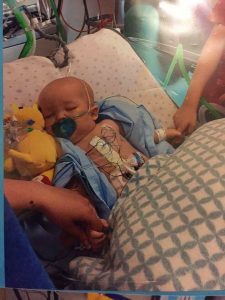 Katrina was warned to keep an eye out for any signs of heart failure – colour change, lethargy and rapid breathing. They had regular check-ups – and one month before Oscar was due to have surgery, at 5 months old, his community children’s nurse noticed that Oscar’s oxygen levels were dropping. Immediately blue-lighted to their local hospital and then, after a further drop in oxygen levels, to the regional cardiac unit in Leicester, Oscar had turned blue and was breathless. His heart was beginning to fail.

Five days later, when he was strong enough, Oscar had open heart surgery to correct the defect.  It lasted 5 hours. Finally Katrina and Kevin got the call that it had gone well, and that they could come and see their baby boy.  The relief that Katrina felt was so strong that it overrode any pain she felt at seeing her little boy hooked up to machines.  He was alive, and that was all that mattered to her.

After a week in the Paediatric Intensive Care Unit, Oscar was transferred up to the ward, and just one day later, he was discharged from hospital. Katrina felt elated. She couldn’t wait to get home, back to normal and back to her own bed. 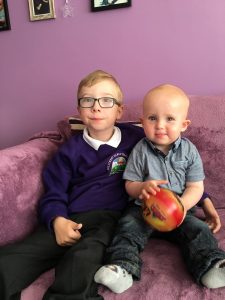 That was 1 year ago. Despite a few small issues since then, Oscar has gone from strength to strength.

Katrina says, “We were so lucky. If the newborn checks hadn’t been done so thoroughly, and if the ECG machine hadn’t been on site, our story may have been very different. Oscar is a cheeky, mischievous and very observant little boy, and he utterly adores his big brother, Olly.

The work of Tiny Tickers is so important to find babies like Oscar. The earlier these defects are picked up, the better for the baby and their family. I am so grateful that Oscar was given the chance to fight his condition.”