Vicky from Somerset got pregnant with Ethan during 2014 and discovered that he had a range of heart defects during her pregnancy. Despite the huge obstacles they would face, Ethan is now a healthy 1 year old. This is their story.

Ethan was my second pregnancy and it was during my 20 week scan that his heart problem was first detected. At first it felt like our whole world had stopped – during our follow up appointment three days later, we knew the seriousness of his condition. That he had five separate defects (a Double Inlet Left Ventricle, Transposition of the Great Arteries, Pulmonary Stenosis, a large Ventricular Septal Defect and Cyanotic Spells), and that they could mean he would be wheelchair bound for life.

As my pregnancy progressed, my baby grew perfectly. There were no issues and you could almost forget about what we knew was coming. 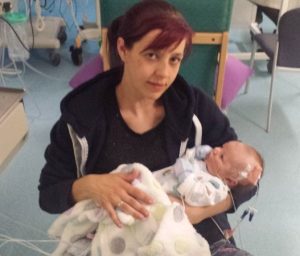 I was induced a week early in the regional cardiac unit in Bristol. My new baby boy, Ethan, was immediately taken to the neonatal unit where he stayed for a week, given prostin to keep one of the holes in his heart open. Unfortunately it was here that he contracted septicemia for the first time. It cleared up and Ethan was sent home until he was ready for the next stage of his treatment.

One week later, his saturation levels deteriorated and we were immediately admitted back to the specialist cardiac unit. Ethan was, by this stage, very ill, and his colour was frighteningly blue. Emergency surgery would be required within a matter of hours to insert a shunt. This procedure went well – but the blood poisoning returned, complicating his recovery.

Further issues were to arise. Ethan’s blood clots very easily, leading to significant problems in inserting and maintaining cannulas. There was one occasion when the medical team had to try 21 times to get a cannula into his vein. They eventually got one in his arm, only for it to fail after 24 hours. The only solution was to insert a Hickman line.

None of this stopped his transfer back to our local hospital, which was a welcome relief. I was trained in mixing his antibiotics and cleaning his Hickman line. I could almost convince myself that these were normal ‘new mother’ duties.

Three months after his surgery, Ethan was finally discharged from hospital – he was 4 months old.

For the next two months, we had regular check-ups and then, in November, when Ethan was 6 months old, it was time for Surgery Number 2. He was in the operating theatre for 6.5 hours but, this time, there was no blood poisoning and no significant complications.

Within two days, he was transferred from ICU to the High Dependency Unit; 4 days later he was up in the ward; and the following day, we could take him home. Just one week after surgery.

It was truly remarkable. 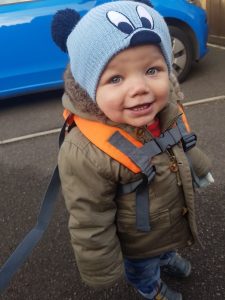 That was a year ago. Since then, Ethan has had regular check-ups and has to have a heart scan every 6 months but he has gone from strength to strength. Our surgeon has labelled him a ‘miracle baby’ – I’d be inclined to agree.

Although he has taken a little longer to crawl and walk than his peers, at 15 months he suddenly reached lots of milestones at once and is now walking and interacting like any other toddler. And he is obsessed with the Teletubbies.

Although it certainly didn’t feel like it at the time, we were very lucky that Ethan’s condition was detected during our 20-week scan. His care started as soon as he was born, and we could prepare ourselves for what lay ahead. I dread to think how things could have been different.

I haven’t spoken about our experiences before but now I want to offer comfort and support to parents like us. When we got our diagnosis, I had no idea how common heart conditions were in babies and how many people are going through it.

You may think that you are alone.  You aren’t.