Oscar was born with Tetralogy of Fallot, which was detected during his mum Nikki’s 20 week pregnancy scan. This is their story.

Oscar is my second child and I got pregnant in July 2015. Aside from a little bit of morning sickness, everything seemed to be going well, and we sailed through my 12 week scan.

But during the 20 week scan, the sonographer seemed to be having difficulty getting everything they needed. Eventually she said, “There seems to be something not quite right with the blood flow between the chambers of your baby’s heart, the blood flow doesn’t present itself as I would expect.” They sent us away with the understanding that we would be called back to our local hospital for a second opinion later in the day.

But when they did call, it was to inform us that, having reviewed the images, they felt it best that we be referred direct to Great Ormond Street Hospital. Until this point, we had remained positive. But the reality then came crashing down. There was a real possibility that there was something wrong with our baby’s heart.

The next day at Great Ormond Street, we watched on while a mother was informed that her baby was ok. ‘There was still hope’ and we clung onto it. But, for us, it was not to be.  A few hours later it was confirmed – Oscar had Tetralogy of Fallot, a serious heart condition that would require heart surgery.

There was nothing that could be done during pregnancy – he was safe in my stomach. So we had regular scans and check-ups – one good piece of news was that his valve had got bigger which meant that there was a possibility that he would not need immediate surgery after delivery. This was a huge source of comfort for us.

I was induced at 38 weeks and had a normal delivery. My baby boy arrived, pink and crying. He spent two days in the neonatal ward but was feeding well and so was brought up to the ward with me. Almost immediately he suffered a cyanotic spell and was transferred back to the neonatal ward. It was very hard to remain calm, especially when coupled with the standard post-pregnancy emotional rollercoaster. My husband and I were worried that this was the start of a very distressing time.

But one week later, Oscar was feeding well and there had been no further cyanotic spells, so we were discharged. At home, we had regular visits from the nurse and his saturation remained very good – 96-100%. He was also thankfully putting on weight and so his surgery was planned for 6 months.

In July, when he was 4 months old, Oscar had a couple of cyanotic spells in quick succession so he was put on propanol and then, at the end of August, surgery was booked at Great Ormond Street. By this stage, you could see the change in him as his heart grew weaker. He was cold to the touch, and his hands were turning blue, he now needed his surgery.

The first surgery date was cancelled at the last moment, but two weeks later, my little boy at open heart surgery, just before he turned six months old. 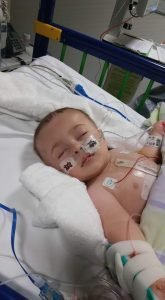 We had expected it to last four hours but, due to a few complications, it ended up lasting six. Nothing can prepare you for the agonising wait. Afterwards, he was transferred to the Intensive Care Unit. It was here that we first saw him. I thought I was prepared for what to expect but the reality of seeing your own child in this environment, swollen and post-surgery, was extremely difficult.

Immediately after surgery, his kidney function was weak and his blood pressure was too low. We had a day of consultants and fellows, in and out of Oscar’s room, checking up on him, but within 72 hours, he was stabilising. Five days later, he was out of the ICU and in the heart ward. Three days after that, he was coming home.

That was 3 months ago. We have regular check-ups with a community nurse and initially he was a bit slow in putting on weight but now, at 9 months, he is thriving. Aside from the scar on his chest, you wouldn’t know he was a cardiac baby. 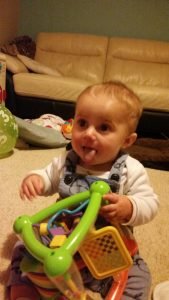 am very grateful that Oscar was my second baby. I can only imagine how difficult it must be if you haven’t had a child before – the reassurance and security of knowing the basic ‘parenting’ stuff was a huge relief.

Before Oscar’s situation hit our small family, we knew very little about heart problems. I drew great comfort from reading other families’ stories. The material that we were given was often very clinical- which was useful – but hearing from people ‘just like us’ helped massively.

For any families going through a diagnosis of heart conditions in their new baby, I hope that our story offers some hope. Oscar is now a happy and healthy little boy – rolling around, sitting up and moving around by shuffling his bum in a very entertaining manner. Having a heart problem is not the end of things but a different beginning to their lives. And you are not alone.