“I will never forget the brilliant medical teams who looked after Arthur and me, but especially the sonographer who saved his life.”  Mel’s son, Arthur, was born with Transposition of the Great Arteries, a heart condition which needs to be detected as early as possible. This is their story.

My husband and I got pregnant with our first child in October 2014 and experienced all the usual excitement and anticipation of what was to come. To put it simply, we were over the moon.

I was feeling anxious before going to the 12-week scan, as a lot of expectant parents do. But everything looked normal so I stopped worrying and started to enjoy the early stages of pregnancy, despite battling with morning sickness.

By the time the 20-week scan came around, we were both relaxed and excited, confident that if anything was seriously wrong, the 12-week scan would have picked it up. We knew that we didn’t want to know the gender so our focus was on that; there was no nerves or anxiety.

Forty mins into the scan, that began to change. Our sonographer tried desperately to see what she needed to offer some reassurance but after a few jumps, emptying my bladder and turning on my side, still no luck.

She said, “I’m sorry –I think there is something wrong with the four chambers of the heart.”

Instant tears. And guilt. Why had I not been more prepared?

The specialist confirmed there was a problem. All scenarios seemed terrifying. We were referred to Great Ormond Street Hospital for another scan in two days’ time, with the strict instructions to try not to worry. But of course, we did.

Two days later, our consultant gave us the diagnosis – our baby had Transposition of the Great Arteries. It all became very real, very fast. He was wonderfully patient, drawing me a picture to explain what Transposition of the Great Arteries was all about (a picture I still have), and reassuring us that the prognosis was very good. Surgery was necessary but 99% of children survive it, and early detection of our baby’s condition meant that everything could be controlled and planned.

We met our cardiac nurse for the first time – she has been a vital and supportive part of our journey ever since. 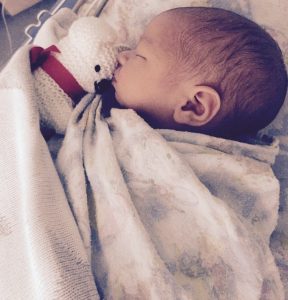 Travelling home that day my husband and I talked through the information given, trying to digest it all. It was a very long journey on the train, surrounded by people focused on their ‘normal’ routines, whilst we felt like a massive bomb had been dropped on us. Not to mention the heartache we were feeling.

As the weeks past, we tried to enjoy the rest of the pregnancy. There were two further appointment at Great Ormond Street, and more regular appointments with our local hospital. The support was first class but, nevertheless, the stress and anxiety that we both felt was extremely high.

It was hard to comprehend that our new baby could be thriving inside my body and yet, when born, he or she would be immediately at risk.

On 11th June 2015, our little boy arrived. Arthur. I wasn’t able to hold him immediately after birth as he had to be whisked away for his checks. Thankfully he didn’t need a balloon septostomy, which was something we had prepared ourselves for and before I was taken to the ward for recovery, I was able to have my much needed cuddle with my beautiful baby boy!

Arthur was transferred to Great Ormond Street the next day. He was put on prostin to keep the duct open, had a cannula in his hand, a tube in his nose, chest pads on and a pulse pad wrapped around his other hand, but otherwise, there lay my baby boy who I had waited 9 months to meet.

For the next 6 days, I tried to be with him as much as possible but recognised that the advice given by the cardiac nurse was sensible. To be there for Arthur, we needed to keep our strength up and rest was important. Thankfully we had been extremely fortunate to get temporary accommodation at the hospital so we were never far away. 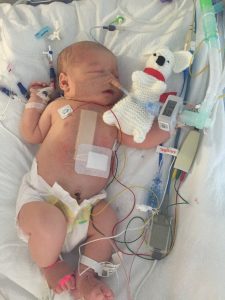 Arthur had open heart surgery to correct the Transposition of the Great Arteries when he was just six days old. I carried him down to theatre and stayed with him until the anaesthetic took hold. Five hours later we got the call; we could come and see him.

To be honest, seeing his little body post-surgery was probably the scariest part of the whole experience. He was swollen everywhere and his puffy features meant that he was virtually unrecognisable as Arthur.

But day by day, he got stronger. The swelling reduced and he was feeding and gaining weight. I was able to take on the ‘normal’ mother duties – nappy changing, holding his hand, singing to him. On the sixth day, we were transferred up to the ward, and by the time he was 16 days old, we were home.

That was almost 18 months ago and we have barely looked back since. Arthur has had one cold and a viral infection in that time. Not bad going for any toddler! He is strong and resilient, full of energy, with a wonderful scar on his chest that he can tell his children and grandchildren about one day.

I will never forget the brilliant medical teams who looked after Arthur and me, but especially the sonographer who saved his life. It was only through her diligence and skill that Arthur’s condition was detected – and I want all babies born with Transposition of the Great Arteries (TGA) to have the same chance. That is why Tiny Tickers’ work is so important. They train sonographers to be better able to detect these heart conditions and it is vital and lifesaving work. 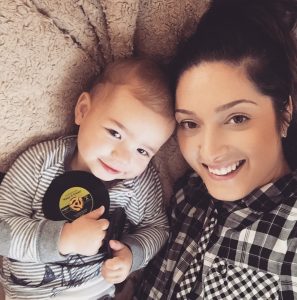 Ultimately, Arthur is going to lead a normal life. He’ll play sports and there may be limitations later, but that’s ok.

I feel it is my responsibility to be there for other heart parents. If you are facing a diagnosis and just want someone to talk to, please get in touch with the Tiny Tickers team and they will pass on my details.

More information about Transposition of the Great Arteries.