Katie found out her daughter, Lily, had a range of heart conditions, including Double Outlet Right Ventricle, before she was born. Here she tells their story and explains why early detection was so crucial for Lily.

‘In April 2015, we found out we were expecting our second child, we were obviously thrilled to bits. The pregnancy progressed normally until I had my 20 week scan. The sonographer found a problem with our baby’s heart and referred us to a consultant at our local hospital.

48 hours later the consultant scanned me and said there was a moderate sized hole in the baby’s heart and also a high probability the baby could have a genetic abnormality. I was offered amniocentesis but refused as I was 22 weeks pregnant at this point. Instead, we paid privately and had a non-invasive test that ruled out some genetic abnormalities.

In the meantime we were referred to Birmingham Women’s Hospital for a cardiologist to take a look at Lily’s heart. The scan didn’t go as well as expected. We received the devastating news that Lily had a more complex condition called Double Outlet Right Ventricle and a Large VSD (hole in the heart). Our tiny baby would need open heart surgery at 3-6 months.

We then continued to have regular follow ups at the Women’s Hospital. With each appointment they picked up other issues with Lily’s heart. This meant they weren’t as confident they’d be able to fully correct her condition.

On New Years Eve 2015, our little warrior made her swift grand entrance into the world. She looked absolutely perfect and it was impossible to believe there was anything wrong with her. We held her briefly before she was whisked off to neonatal ICU where she was monitored for a week.  During this time she seemed like a perfectly healthy baby.

About a week after we were discharged we had an appointment at Birmingham Children’s Hospital. Lily’s cardiologist took a look at her heart (at this point she was so well I was convinced they’d made a mistake at the scans).  However he picked up again yet another problem with the mitral valve and found some ventricular disproportion. He explained to us that Lily’s condition was complex and a repair might not be possible.  He sent us home with some diuretics and an appointment to see him in two weeks.

The following day, Lily’s health visitor came to weigh her. She picked up that she’d lost a little bit of weight. As the week went on, Lily started to become increasingly breathless, tired and started vomiting. When the health visitor came back again, Lily had dropped back down to birth weight.

The health visitor advised us to take Lily to Birmingham Children’s Hospital A&E, where she was admitted for showing signs of heart failure.  Lily had fluid on her lungs because too much oxygen was going to them. They conducted an operation to fit a band round Lily’s pulmonary artery in order to restrict the amount of oxygenated blood going to her lungs. After a few weeks in hospital, Lily was discharged.

Since the operation Lily has done amazingly but we have always got in our minds that this is only a temporary solution for Lily’s heart. At some time in the next 6 months she will need major surgery.

Looking To The Future 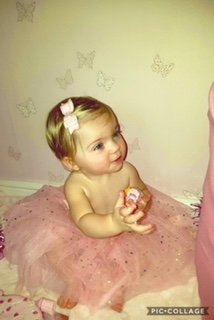 We are at the point now that we are seeing some decline in Lily’s health. She is losing weight, being breathless and feeling cold.  She is due a cardiac catheter in the next few weeks to assess when or what her next surgery will be. We’re still not certain if she will go down the correction or single ventricle route.

We are so thankful for the early detection of Lily’s condition from my 20 week scan. Early detection has resulted her in having the highest level of care since before she was born.’