It was thanks to the diligence of a midwife that Molly’s heart condition (Ebstein’s Anomaly) was detected during mum, Amy’s, pregnancy. Without early detection, it is unlikely that Molly would have survived. This is Molly’s story, as told by Amy.

Molly is my second child and throughout the majority of my pregnancy, everything seemed to be perfectly normal. I sailed through my 12 week and anomaly scans and no concerns were raised. 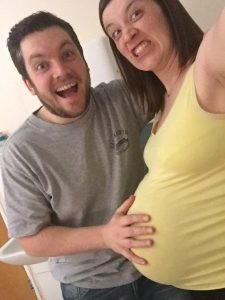 However, my pregnancy wasn’t normal. By 19 weeks, I was already getting the comments you expect during the latter stages – “When are you due?”, “Not long now!”, “You must have twins in there” – all the usual. Although all the midwives were aware of my size, they weren’t concerned and I tried to accept it.

As the weeks passed, I never fully felt comfortable in the pregnancy. Something wasn’t right – I didn’t know what – but with no regular movements and my ever-increasing size, I could never accept that it was a ‘normal’ pregnancy.

When I was coming up to 37 weeks, a new midwife reviewed my chart and recognised that my proportions pre-pregnancy shouldn’t suggest a bump as large as the one I was currently carrying – I am 5ft 2 and a size 8.  She suggested a growth scan which showed that I had Polyhydramnios – otherwise known as too much amniotic fluid around my baby. As a result, I was scheduled to have weekly scans until delivery.

At the next scan, at 38 weeks, the sonographer happened to look at a section of my umbilical cord and detected an issue with blood flow.  This merited a complete check of Molly.

Immediately she noticed Molly’s heart – it was very enlarged and she was, to all extents and purposes, in heart failure. It felt like no-one, from the doctors to the midwives, could understand why she was in heart failure. They had never seen a case where all the checks/traces suggested everything was perfectly normal but the reality was that there was a major issue with the heart.

It was entirely by chance that it was picked up. A freak chain of events that led to Molly’s heart being observed. I cannot think what may have happened if the midwife hadn’t been so conscientious in her review of my notes, or if the sonographer hadn’t scanned the part of the cord that had a blood flow problem.

We were booked in to go to Leeds General Infirmary the next day for a fetal scan. And it was there we got our diagnosis. Molly had severe Ebstein’s Anomaly, an atrial septal defect and potential pulmonary atresia.

We were told that Ebstein’s Anomaly was a hugely variable condition and she may not make it through the pregnancy, but if she did every hour she survived post-delivery would increase her chances of surviving her condition.

We were sent home until a bed became available at the neonatal unit. Having literally just moved house, I found myself sitting in Molly’s nursery, devastated and terrified that she would never sleep in her new room, or in the Moses basket we had bought for her. I cannot begin to describe how scared I was. 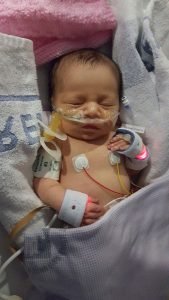 On 16th March 2016 , I was induced and Molly arrived. I held her briefly before she was taken to the neonatal ward. She was given Prostaglandin to keep her duct open as her body adjusted throughout the neonatal period. The likelihood was that she would need a fontane procedure but the initial plan was to watch and wait for at least one week, to see if anything changed as she normalised.

Molly fought back. Her saturation levels were stable at 80 for about 4 days. But it didn’t last – she went into respiratory arrest on day 5. As the medical team performed CPR on her, I ran away. My husband, Tom, followed me, torn between comforting me and wanting to be close to our baby. As he went back into Molly’s room, I heard her start to cry. That was all I needed to realise that I needed to be with her too.

The next day, Molly stabilised again and was moved to the Cardiac High Dependency Unit. She was taken off prostaglandin on day 9 to see how she would cope – at first her saturation levels dropped to 70 but then, little by little, they started to creep up. Her pulmonary valve had started to work. For us, it was nothing short of a miracle.

We got to take her home four days later, and 10 days after that, her SATs were at 95.

When Molly was five weeks old, I was changing her nappy and noticed that her feet were pink! Pink feet! Sounds silly but they filled me with joy!

At eight weeks old, her SATs were 100 and they have been at this level ever since. 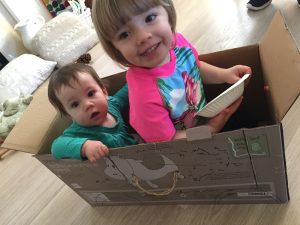 She is now almost 11 months old and, to the outside eye, looks like a normal baby – she is crawling, cruising and happy – but we know how serious the problem with her valve is.

We continue to watch and wait. I fear what happens as she continues her physical development – when she starts climbing, walking and running. More pressure will be put on her heart. I can sometimes forget that she is ill until cold fear grips as realisation dawns. But there is great comfort in knowing what signs to look out for and we try and make her life as normal as we can.

Ebstein’s Anomaly is an extremely difficult condition to predict. We don’t know how it’s going to play out in the future. In the meantime, Molly has quarterly check-ups at Leeds General Infirmary and an annual check-up at Great Ormond Street. My goal is to get her to 7 years old without needing serious treatment.

I’ve only recently been able to start looking at photos and videos of when she was a baby – it was too hard to look at them before. But we have come so far that I am now able to revisit that time – albeit tentatively.

I am so thankful to the midwife who so diligently reviewed my notes. Without her understanding and skill, Molly is unlikely to have survived. Her duct would have closed and, with no forward flow from her heart to her lungs, she would have gone into heart failure. But I wish I had trusted my instincts, pushed a little harder and questioned more. She was my responsibility to protect and I nearly didn’t. That is my advice to any parents out there – don’t be afraid to question. Your intuition is a powerful tool. Use it.