Theo was born with a serious and rare heart defect, Truncus arteriosis, when only one blood vessel develops from the ventricles of the heart instead of two. He is currently a happy and healthy 8 month old. Here his mum Hannah tells their story:

In June 2016 our son Theo was born with a life threatening heart condition we knew nothing about. It’s not hereditary, it’s not genetic, it’s not something I did wrong in pregnancy it’s just one of those lightning bolt things that happens to other people…

When Theo was born I’d already been quite ill during labour so he was raced off to intensive care for antibiotics as a precaution. However, as time went on, they realised the oxygen levels weren’t high enough in his blood and no amount of oxygen was helping. The team at Birmingham Women’s Hospital suspected a cardiac problem so one the cardiologists from Birmingham Children’s Hospital came to see Theo. That’s when he was diagnosed with Truncus Arteriosis, 2 VSDs (holes) and a leaky valve. We were told that without surgery he would be dead within days but that the surgery only had a 70% success rate due to the complexity and how young Theo was.

I had, by then, only been able to hold him twice. 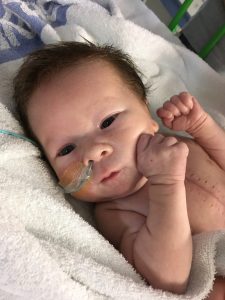 At 6 days old Theo had a 9.5 hour operation including 237 minutes of bypass (the average adult heart bypass surgery lasts 90 minutes) and spent 17 days in paediatric intensive care and 6 weeks on the cardiac ward. He then continued his recovery at home for a further 3 months.

People ask us how we coped that day and in the weeks after and I honestly don’t know. Your life shrinks down to the space by their bed, to the surgeons you seek reassurance from, to the hours ticking by, and life outside seems surreal and distant. But you do it, because if your tiny baby can fight then so must you.

He has overcome so much already in his short life and even the simple things like feeding were initially exhausting for him. We have been back to the hospital several times with infections his little body couldn’t handle. Life with a CHD baby can be difficult, and sometimes the anxiety and sadness gets on top of us, but we also feel incredibly grateful and blessed to have him here with us and for the incredible cardiac team at Birmingham Children’s Hospital who saved his life and continue to care for him. These days to look at him you wouldn’t even be able to tell and he’s a very cheeky happy baby! 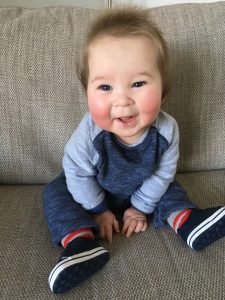 Theo will always have to have more surgery because the inserted tube has to be replaced as it gets worn and too small for his growing body. He will have another open heart surgery before he is 2 years old and then several more before adulthood.

I had plenty of scans during my pregnancy but not one picked up what was a fairly significant structural problem with Theo’s heart. I should have had a planned c section and a cardiac team standing by. Instead I had a very risky induction, long labour over four days and finally an emergency c section putting Theo’s life in danger.

In spite of everything we feel extremely lucky things worked out the way they did. But I now know that for many women it tragically isn’t the same. Theo and his fighting spirit have inspired our family to raise awareness and understanding of CHDs in the hope that one day no baby will be put at risk, and that funding for research and surgical developments will increase.