Coarctation of the Aorta – Yazmin’s Story

Yazmin was born with Coarctation of the Aorta – a serious heart defect which was not detected until she went into heart failure. Here her mum, Shontele, tells their story.

‘My pregnancy with our beautiful daughter Yazmin Xavier went very well until about 34 weeks. I went to have a scan becuase I felt reduced movements. The doctor told us all seemed okay, but did pick up a kidney issue called hydronephrosis (also known as a duplex plumbing system). Apparently, doctors could correct this after birth and it was nothing major to worry about.

Our due date came and I noticed reduced movements again, so had to be induced. Three days in labour followed and our Yazmin finally arrived by emergency C-section. She weighed a healthy 8 lb 2 oz.

After birth, Yazmin had low glucose levels and jaundice. Doctors said it was because she wasn’t feeding well. I was breast feeding and noticed she was working hard, constantly falling asleep and wanting little and often. These are common signs of CHD, but I had no idea. If only I had known, then I would have been much more persistent that something just wasn’t right. Yazmin was closely monitored for her kidney issue and we were then discharged home 5 days later.

Yazmin’s feeding continued to be an issue and I changed to bottle feeding because I was paranoid my milk flow was the problem. It made no difference – she still worked hard during feeding and slept all the time.

After a very bad night with Yazmin in September, we called the doctor first thing and got an appointment straight away. Yazmin appeared to have colic after screaming and not sleeping the night before. The doctor sent us home and arranged another appointment later that afternoon.

An hour or so after the first appointment, Yazmin started to deteriorate. She didn’t want feeds at all and made a humming sound with nearly every breath. We went straight back to the doctors because we thought she had a kidney infection. They told us to go to The Royal Alexandra Children’s Hospital in Brighton to be on the safe side.

As we were about to leave the GPs’ surgery, Yazmin turned blue. The doctor called an ambulance and gave her oxygen while we waited. The ambulance journey felt like a life-time. All I remember was the paramedic saying she had no SATS. Yazmin was grunting and very shallow breathing by this point. By the time we arrived at the children’s A & E, she had completely collapsed.

I was all alone while my partner was driving down from home and I have never experienced stress or emotions like I did that day.

At the hospital, they attempted to get a line in her but she had no femoral pulses, so they had to screw straight into the leg bone marrow. She needed help fast – thankfully halfway through they got a line in the groin. She also had an echo and chest X-ray.

At this stage my partner arrived and in a blur doctors told us that our daughter was in heart failure. She had a Coarctation of the Aorta and had to be ventilated while she was sedated. We were very lucky and had only just got there in time.

The wonderful Evelina Retrieval Team arrived and after doing their amazing stuff we made our way to London. I went in the ambulance with Yazmin and I was still in pure shock.

After a 50 minute journey with ‘the blues on’ again, we arrived to be met by ten doctors and nurses who quickly surrounded Yazmin and did what they do best.

I felt very alone because my partner and our parents were still on their way up, but I remember one lovely doctor coming and explaining everything that was going on. They had also found that Yazmin had a large VSD. Apparently the coarctation was substantial.

I didn’t know anything about heart defects, so the doctor explained everything and told me Yazmin needed surgery after her body had a few days rest.

I found PICU to be a very daunting place. All the machines, wires, bleeps and monitors are surrounding your poor baby while the doctors and nurses work their magic. The staff working that night were just exceptional and so compassionate.

Yazmin, under full control of the machines, had her ‘rest’ day.

We also met with Yazmin’s Surgeon, who came to answer our questions about the actual open heart suregry (OHS) procedure. He said they were going to fix the two congenital heart defects at the same time, through the sternum. He explained all about the bypass machine and that she would need a blood transfusion. Apparently, a newborn only has about a coke can equivalent of blood circulating through their body.

I remember being handed the surgery consent form and reading ‘Death, Infection, Loss of Blood’. At that point it all finally sank in after the whirlwind of the day and night before. Yazmin had a relatively good rest day to help her organs recover, especially her little liver and kidneys. They explained surgery couldn’t wait any longer.

Yazmin’s surgery went ahead the next day when Yazmin was only 15 days old. 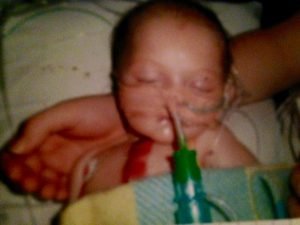 We walked around to the theatre, kissing our baby girl before she went in and trying to stay positive. We knew she was in great hands. Those four hours felt like an eternity. We went and had some food – the first actual full meal we had for a few days. We didn’t want to leave Yazmin’s side.

The time was near for the end of surgery and I received that all important call came to my mobile. Yazmin was out of theatre and we were to make our way back to PICU. We hadn’t even thought of what she would look like after surgery and nothing can prepare parents for the wires, tubes and machines. It’s totally overwhelming.

The surgery went well but the next 48 hrs were critical. We just hoped Yazmin would pull through without any major setbacks. Thankfully she did really well. 24 hours after surgery I could have a lovely cuddle with her!  I was so scared of hurting her but the nurse assured me that a mummy cuddle is the best way to heal!

A few more days passed and Yazmin went from strength to strength.

The first time she opened her eyes is a moment we will never forget. The first time she tried to cry, we saw her facial expressions but there was no sound! We later learned she had slight vocal cord paralysis due to the ventilator tube and the surgery. This improved over the next few weeks. 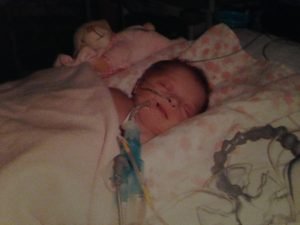 One week after Yazmin’s OHS she had to go back under anesthetic for a minor fix. This was such a worry and we once again had to enter the operating theatre. Yazmin’s surgeon assured us she would be in safe hands. The procedure was over within 30 minutes and we went to the recovery room.

We were then transferred to our local Royal Alexandra Children’s Hospital so they could keep an eye on medications and feeding. Yazmin had some blood pressure issues from the medications and was being closely monitored. The left side of her heart was still extremely weak and we were told it just needed time.

Then, after six long days, we finally got our little girl to ourselves and could go home. Those first few nights home were very daunting to say the least, constantly listening out for any slight noise from her and checking she was okay.

As the weeks went past, Yazmin was doing very well. She was gaining weight nicely as she had dropped to 6.5 lbs in hospital (this seemed so tiny considering her 8.2 lbs birth weight.) 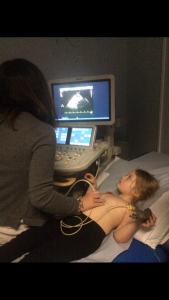 Yazmin has recovered well and is now a happy four year-old who still has ongoing checks. 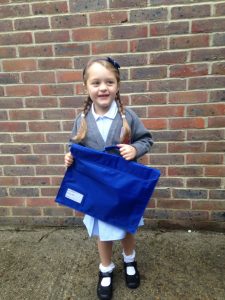 We’re so proud of our heart warrior considering what her little body had to endure. I am so thankful to the nurses and doctors who saved her life and who continue to see her progress.

During our time at the Evelina we met some lovely families who had all their own special stories to tell’.

If you are the parent or carer of a heart baby, join our supportive Facebook community here.