Undetected Coarctation Of The Aorta : One Baby’s Story

‘My husband and I were delighted to find out that we were expecting out third child in August 2014, and relieved to hear that all ‘appeared normal’ on the scans. I’d never heard of Coarctation of the Aorta and the scans didn’t detect it.  We weren’t expecting anything to be wrong. We were lucky enough to have had two very healthy babies previously, but there is always an element of anxiety that any expectant parent feels as they walk into the scanning room. 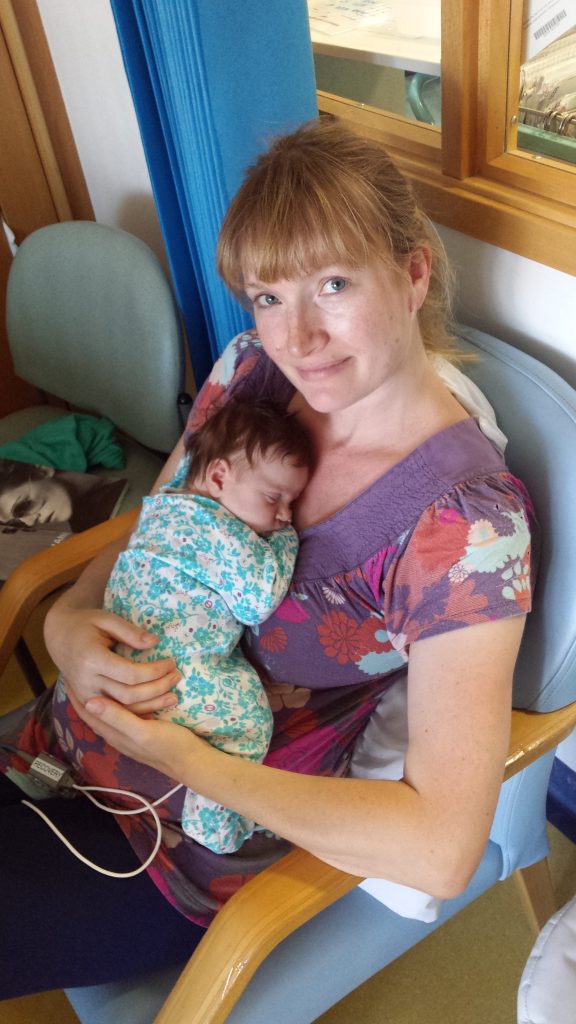 The pregnancy proceeded as planned and as a third time mum, the midwife was confident that I would be in and out of hospital quickly after the birth.  My due date came and went and I became fed up with waiting.  This was new territory for me. Both my other children had arrived rather promptly around their due date, so by the time I was induced, ten days past my due date, I was keen to get on with it.

I waited around in the hospital for the labour to start.  Nothing happened and by the time the evening came, I begged my husband to go home and give the other two children, who were being looked after by my mum, a kiss goodnight. Of course, half an hour after my husband left the hospital, I went into labour, the most painful labour I’d ever experienced, and gave birth in about 30 minutes.  It was too quick for my husband to get back to the hospital and he ran into the labour room, panting, to find me with a baby in my arms.  We were both upset that things hadn’t gone to plan, but relieved that we had a seemingly healthy baby girl in our arms, so resolved to forget about it and get on with things.

Two and a half hours after giving birth, I was sitting on my sofa at home with my beautiful new baby in my arms. She was the most perfect thing.  She had the sweetest face, a little button nose and a smattering of chestnut hair.  My husband and I were delighted with the new baby. I had always wanted three children, and felt that our new daughter completed our family.  I was the most contented I had ever been.

Feeding was straight forward and having done this twice before, things went swimmingly for the first seven days.  We gave our new daughter her first bath, took photos of the ‘new family’ and ventured out for the first time. Neighbours came round to see the new baby and it seemed that life would continue as normal.

However, at eight days old, our daughter suddenly started to sleep all the time.  I would try to rouse her for feeds, but she would either scream whilst trying to feed or fall straight back to sleep.  I joked with my friends saying “at last I have a sleepy baby” (my children had been renowned for being bad sleepers). Initially, I wasn’t overly concerned. Sitting on the sofa with my husband,  I asked him whether he thought the baby was sweating just after a feed.

Friends visited on day nine, my friend also had a newborn, and I told her that my baby just seemed to sleep all the time.  She seemed to be breathing quickly, almost panting, but I kept telling myself that my other children did funny things with their breath when they were newborn and that it was probably nothing. That evening, I rang the midwife.  The baby hadn’t fed properly for eight hours and I was starting to get concerned. The midwife told me to try to express some milk, find a syringe, and squirt some into the baby’s mouth.  A few hours later, I rang again.  Coincidentally, it was my own midwife who answered the phone.  I expressed my concerns and she told me she would come first thing in the morning.  It was 11 o’clock at night.

At 9am the midwife arrived. It was bank holiday Monday. The baby hadn’t fed properly all night.  The midwife had a student with her and they both began to weigh the baby and I spoke to them about the feeding problems.  A neighbour, who was a member or a breastfeeding group, had arrived a few minutes and she noted that the baby seemed to be panting.  We all looked at the baby and nobody seemed to be very alarmed.  Suddenly, ten minutes after having arrived, the midwife rushed to the window of my bedroom where she could get phone signal and called the ambulance.  She was saying words like “ tachycardia…..” that I didn’t understand and then held the baby and was saying things like “stay with us”. I was petrified.  We seemed to be in some kind of emergency- what was happening? The midwife put the baby down my top, “skin to skin” she said.

Admission To Hospital And Diagnosis Of Coarctation Of The Aorta 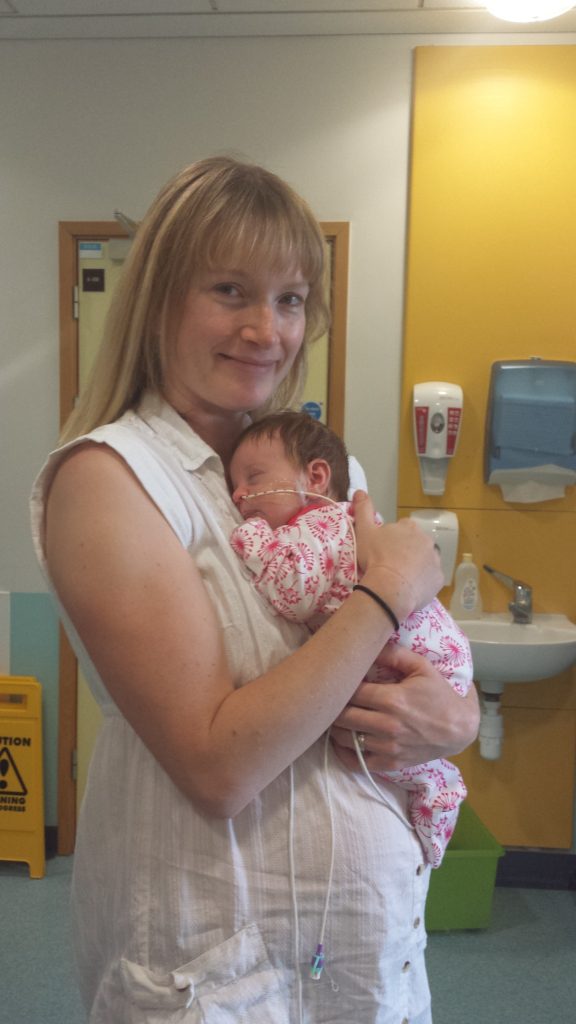 I could not tell you what was going through my head on the way to the hospital. Nothing, I think. At the hospital, everyone seemed panicked. Our daughter was covered in wires. We were told she was critically ill, that they suspected a heart problem and that she might not survive. She was going in to organ failure and needed to be put to sleep and for the doctors to take over her breathing. We waited in the room next door, waiting to hear whether this had been done successfully or whether we had lost her. It seemed to take hours. All I could think to myself, is “how will I explain to my five year old that her sister had died?” I hope I will never feel as terrified as I did in that waiting room again.

Eventually, the doctor came into the room and told us that she was “stable, but critical”  We were transported up to the Children’s Hospital, an hour and a half drive in Bank Holiday traffic, using the hard shoulder most of the way. At the Children’s Hospital, the atmosphere seemed to be calmer and a nurse took me to one side and said to me “we fix little babies here every day”. It was the first glimmer of hope I’d had in about six hours- maybe my baby would survive? Maybe she would be OK?

Surgery For Coarctation Of The Aorta

My daughter spent two days in intensive care in an induced coma while the doctors tried to open her ‘duct’ so her heart could once again function as it does in the womb.  She was diagnosed with Coarctation of the Aorta. They operated on her two days after arriving at the Children’s Hospital. On the day of her operation, family members made the long journey down to the hospital to offer their support. We spent two hours walking around Bristol whilst they operated on her, waiting to hear news of whether the operation had been successful. It was the most agonisingly long two hours of my life. The relief we felt when we were told that the operation had “gone to plan” was overwhelming and to say that we felt “grateful” to the surgeon and the doctors and nurses who cared for our daughter in the following weeks, is a huge understatement.

Recovery and Return To ‘Normal’ Life

In the two weeks that followed, I stayed in Bristol, near to the hospital, whilst my husband looked after our other two children at home. They tried to visit as often as they could. It was hard juggling everything and we wanted to keep things as normal as possible for them too. Self-preservation kicked in and I knew that I needed to stay in the hostel close by, rather than at the hospital next to my baby.  I knew she was in good hands and I felt so traumatised by recent events that if I didn’t allow myself to rest, I may not cope. Despite having to be strong for everyone, I did a lot of crying on my own in the hostel.  The shock of what happened was hard to cope with too. Every day I would pinch myself – how did this happen? Was it my fault? Did I do something to harm the baby in my pregnancy? It was only months later that I was to come to terms with the fact that these things just happen sometimes and that nature doesn’t always work as it should.

Feeding felt like it took a long time to establish. Actually, I’m told that my daughter managed to feed quickly  after everything she had gone through.  She was a strong little baby.  She was tube fed initially and I spent two weeks expressing milk to feed her in this way. After about a week of being at the hospital, a nurse recommended that I express milk in the night too. So I remember putting my alarm clock on for 2am every night to express milk. It’s a very lonely feeling sitting up on your own, away from home, at 2am expressing milk without your baby next to you.

We were assigned a Speech and Language Therapist to help us with feeding. After two weeks, we were transferred to our local hospital where we were to stay another week, whilst we continued to establish feeding. My daughter experienced ‘Vocal Chord Palsy’ following her operation. This meant that we couldn’t hear her cry and it also made feeding trickier. Three weeks following her initial diagnosis, we were home.  We had regular visits from the Speech and Language Therapist and from the Health Visitor. It was a strange feeling, being an experienced mum and yet desperately needing the help and support of the health professionals.

We were finally signed off when my daughter was about a month old. For months afterwards, I would wake up feeling, quite simply, sad. My husband said the same. It didn’t seem fair that this had happened, yet at the same time I knew we were lucky. So lucky that our daughter was OK and that we hadn’t lost her. We managed to resume normal life. We even went camping in France that year when she was three months old (we must have been mad!) Over the course of the year, the ‘sad’ feeling became less and less. We got used to the fact that she was born with Coarctation of the Aorta.  She is now a happy, sociable and very busy two year old. She is very confident and certainly has a determined streak in her!

Coping with a critically ill child in hospital was the most challenging thing we’ve ever had to go through as a family. However, we feel so grateful to everyone who saved her and so lucky that she is with us now.  It has changed me as a person and made me more empathetic to what other people have to go through in their lives. I still worry about my daughter now and I’m sure I will do for the rest of my life.  My husband and I are even more determined to make sure all our children live healthy, active lives. Sport will come high on our family agenda as they grow up.

When I first arrived at the Children’s Hospital, I remember reading all these stories on the wall in the Parent’s Room. It was a world that I had never encountered before and at the time, I felt completely bewildered and scared.  Those stories on the wall helped me. It is comforting to know you are not the only one going through a crisis like this. This is why I’ve decided to share our story about our journey with Coarctation of the Aorta. I hope it will be comforting to someone who is reading it.’