Ivy was born with undetected Transposition of the Great Arteries along with other heart problems. Here her mum, Sam, shares their very emotional story:

In November, when we welcomed Ivy Elizabeth into the world she weighed a healthy 7.11lbs and seemed to be a happy baby. The doctor checked us over and cleared us to go home just eleven short hours after birth.

We went home and settled into life as a family of four. Ivy was exclusively breastfed and fed very well for the first ten days. She put on weight but by day ten she started losing interest in feeding. Our chubby-cheeked baby just wanted to sleep.

We took her to the doctors and they diagnosed her with bronchiolitis. We were told to feed her little and often and keep having her weighed. The health visitors and midwives visited every few days to weigh her and offered advice on how to get food into her (they advised me to express milk and give it to her from a teaspoon!) 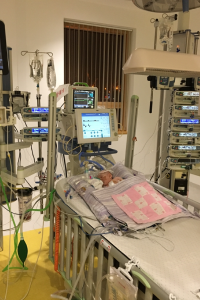 By day sixteen it was almost 24 hours since she had a wet nappy and I worried she was dehydrated. We phoned our doctor and were told to take her straight to A&E. I thought she would just need some fluids to re-hydrate her and give her the energy to feed again.

After a few minutes in the waiting room we were called. Two nurses came in to take observations and they commented on her ‘good colour’ and said her temperature and awareness were good.  Then they checked oxygen levels…

The nurses just looked at each other and said, ‘ok we need to get her stable.’ They took her away in her car seat, leaving us sitting there is disbelief. What was wrong with Ivy? I broke down in tears. Three or four minutes later someone come to find us and said we could see her but told us not be alarmed as she was being ‘worked on’.

I walked around a corner behind the curtain and there lay Ivy with a mask on her face and wires everywhere. My heart just broke. Thankfully, her oxygen levels began to rise. The doctors still thought it was a bad case of bronchiolitis.

‘This baby has heart disease!’

They took more blood and then wheeled her up to the children’s ward for more observations. More doctors and nurses came to look at her. One nurse and one doctor in particular were not happy with the diagnosis of bronchiolitis. What happened next was a blur to me. The doctor decided to phone his friend who was a cardiologist and then did some checks on Ivy’s heart, including a scan. He suddenly shouted, ‘this baby has heart disease!’

Doctors ran in and out of the room while we sat there praying they were wrong.  After what felt like hours, he finished checking her heart and could speak to us. She had Transposition of the Great Arteries (TGA) along with some VSDs and ASVs (holes in her heart).

Transposition of the Great Arteries 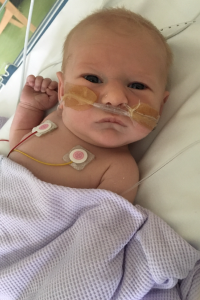 We were prepared for transportation and a baby ambulance arrived to take us to Liverpool. Once in Liverpool we were taken through long white corridors with electric doors. I felt as though we were in a spaceship!

We walked into a room where doctors and cardiologists had been called in especially to see Ivy. They confirmed the TGA diagnosis and planned to operate as soon as possible.  But then they found she had a viral infection, meaning they couldn’t operate until she had recovered from it.

Days turned into weeks as we waited for her to get better.  We were just willing her cough to clear up and for her to feed. Unfortunately, she just got worse. Every day, they would find something else wrong. Low sodium, water retention, infections, VSDs etc.

So after a long Christmas and New Year in hospital she was scheduled to have a CT scan to get a good picture of her heart. My little girl was put to sleep while holding my hand. Then I had to leave her. The results showed she also had a problem with her coronary artery, which meant her operation would be longer, harder and more risky. 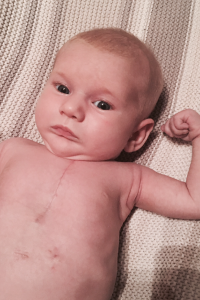 Ivy was christened and ready for her operation on at the beginning of January.  She was taken down at 10am and we knew we wouldn’t see her again until at least 8pm.  We sat, we stood, we paced, we got angry and then upset. We went to the chapel and we prayed.

At 7.15pm we saw Ivy’s surgeon walking down the corridor towards us. He asked to speak to us in private and we immediately thought the worst.  Why wouldn’t he just tell us how the operation had gone?

Walking behind him, I couldn’t help asking, ‘Is she okay?’ He replied, ‘Sorry. Yes she’s fine.’  My husband and I were hysterical, hugging each other and the surgeon in turn. We were crying happy tears for a change.

The surgeon told us it had all gone well. Ivy was stable in intensive care and we could see her soon. We were so happy! But what a shock when we did see her…Every inch of her body was covered in a wire or a drain. There were blood pots on the floor, tubes in her nose and mouth and stickers on her head. She was still our Ivy but she looked so different. We knew every single wire on her body was keeping her alive.

The following days flew by and Ivy improved gradually. It was the first time I had been away from her during the night and I found it very hard. I wrote a scrap book about her heart journey, knowing it will never fully be over. 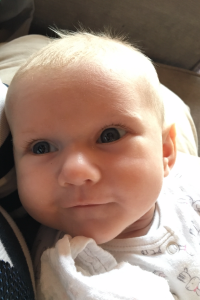 She kept on improving daily and shocked all of her doctors. Four days after the operation, we were back on the ward with a very swollen baby. They were amazed to see us.

Ivy progressed well on the ward and we were moved from room to room. Apparently when you get to the orange room you’re very close to going home.  Well, on the 12th of January we made it to the orange room! Then a doctor came in and told us we could go home that very day. After paperwork galore, scans, ECGs, and echos and we finally took our baby home.

Saying goodbye to the staff was bittersweet as we knew we’d genuinely miss them. They had been so supportive and became our little hospital family.

Over the next few days we needed to encourage Ivy to feed and so we had lot of visits from health visitors and nurses. But Ivy did amazingly well and we couldn’t ask for more. She has a good battle scar to show off to the world. Her scar will forever remind us of how very ill she was and how she fought to be here to tell the tale.

We couldn’t be prouder of our daughter, our little heart warrior Ivy. 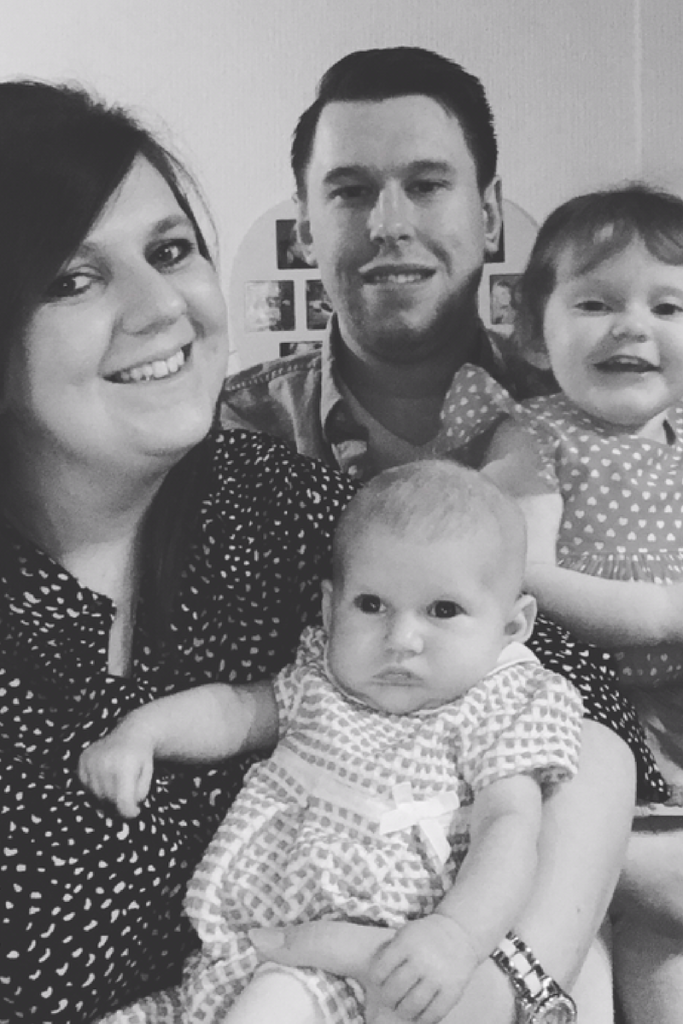