“I cannot describe how proud I am of what she has been through in just a year. She’s my inspiration. I am convinced that as she grows up, her heart condition won’t make her weaker, it will make her stronger”.

Thea’s heart condition Pulmonary Vein Stenosis – a narrowing of a valve in her heart, was diagnosed at 4 months old, following a heart murmur from birth, her Mum Katie tells her story.

“Dorothea (Thea for short) was born on Friday 5 August after an uncomplicated pregnancy. All my scans were fine and when she was first born there was no sign anything was wrong. We had a lovely first night in hospital together and on Saturday my husband, Paddy returned to collect us to go home. We were packing up and Thea just had to have her new born check before we could go. I hadn’t given this a second thought; so much so that I let Paddy take her for it, whilst I waited for some blood results for myself.

A few minutes later he came back, looking serious and followed by a doctor. He told me she had a heart murmur. I didn’t even know what this was but it sounded serious. When he told me, I broke down.  Nothing can really prepare you for finding out something is wrong with your baby’s heart.  No matter how people try to reassure you, it’s terrifying. I’ve never felt true sadness until that moment and I hope I never do again.

The doctors and midwives were brilliant and told us this was probably a hole in her heart that hadn’t closed yet; this was common and would probably rectify itself in time. With this in mind we didn’t tell anyone that day. I asked for a side room so Paddy could stay with us. I was terrified something would happen to her overnight and I’d be alone with her. It shows how stress focuses your mind on stupid, insignificant things that one of the things I was most worried about was that I’d already announced her birth to friends and family – I felt so stupid that I’d told people she was OK, when now she might not be.

We had to stay in hospital for 24 hours whilst they observed her and ran tests.  My time in hospital was scary and very lonely, even though the staff were great and Paddy was there.  We spent a long time just sitting with Thea, not really talking to each other, each just worrying about our baby. Then, after a couple of days, with the murmur not fading by itself, we were told we could go home, with instructions to watch Thea’s feeding and her colour.  I remember reading ‘monitor for signs of heart failure’ in her red book and being devastated.

We returned to the hospital for a check-up about a month after she was born. The murmur was still there but she was healthy and growing, so we awaited an appointment from Manchester Children’s Hospital for a full cardiology review.

In the meantime we carried on as normal, trying to watch for signs of anything being wrong.  One day she appeared breathless when feeding.  My Mum was with me and she agreed, so we took her to A&E. They ran all the tests and found nothing wrong – in hindsight I think the teat on her bottle was too wide.  This was the first of many false alarms over the next few months, triggered by us thinking she looked pale, or that she hadn’t drunk enough milk that day.  When you’re so anxious about something it’s easy to panic and think the worst.

At her cardiology appointment she was weighed, had an ECG and an ECHO and was diagnosed with Pulmonary Vein Stenosis – a narrowing of a valve in her heart. The Consultant was calm and reassured us that although this needed surgery, they could fix this. I tried to see this as a good thing but the thought of your 4 month old baby having heart surgery, and going under general anaesthetic, is terrifying.

They wanted to get it done as soon as they could and we received her appointment a few weeks later. We went to Alder Hey for her pre-op and after another ECG and ECHO; we met with one of the specialist nurses. She was fantastic and spent a long time with us, explaining the procedure, the risks, the future, and reassuring us they’d follow Thea up for life. Thea would have a tiny wire inserted into her groin with a small balloon on the end. This would be pushed up to her heart and they would inflate it there, to stretch the valve and relieve the pressure. It would then be removed, with the valve hopefully widened.  The nurse explained that, in the best case scenario, she wouldn’t have to have the procedure again, however further surgery may be necessary and there were other options available if needed.

Thea’s surgery was a few days later.  The worst part of the day for me was the waiting. It was just before Christmas but we hadn’t bought many gifts. We couldn’t think about it until this was over. The surgeon came round and I signed the consent form, barely reading it.  I knew the risks but I blocked them out at the time – there was no choice but to have the operation. When we took her into theatre, I honestly felt a bit better. I truly trusted the team there to take care of her.

They said it’d take 2.5 hours and after 2 hours we saw her surgeon on the ward. He walked over and we asked ‘is she ok?’ He matter-of-factly told us ‘she’s fine, she’s in recovery, it’s worked’. Just like that. I can’t think of this moment now without feeling happy. I can’t explain the relief. We collected her from recovery shortly after. The next few hours were tense as her heart rate remained high and she was unsettled. However, the surgeon came to see us again and after another ECHO, said we were fine to take her home.

After surgery we had a check list of things to look out for over the next few days. Luckily, Thea was fine, and we enjoyed our first Christmas a family of four. Since then, she has had 2 check-ups and her heart is functioning very well. We will go back again in a few months. The time before each check-up is tense, but for the rest of the time we get on as normal. As the specialist nurse told us, she will live a normal life and will do everything her brother does. We know she may need further surgery in the future but we don’t let ourselves focus on that. She may never need anything again and we won’t waste today worrying about tomorrow. 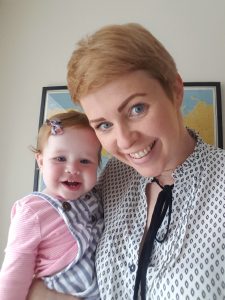 I saw Tiny Tickers asking for volunteers to share their story of babies with Congenital Heart Disease. I had read a lot of the blogs in the early days with Thea and so I thought I’d share her story, to raise awareness of this brilliant charity and maybe to make other parents feel that they’re not alone. It’s a very lonely place when you first find out something is wrong with your baby’s heart and I was reassured by the stories I read, of children who had had their surgeries and were now doing well. Thea is almost one now, she’s a happy, active baby and you’d never know there was anything wrong. I cannot describe how proud I am of what she has been through in just a year. She’s my inspiration. I am convinced that as she grows up, her heart condition won’t make her weaker, it will make her stronger”.