Elijah was my first child. I never knew what to expect, I had read the books, the blogs but what happened was not in any of them. It wasn’t discussed in the Ante Natal Class, or retold by fr 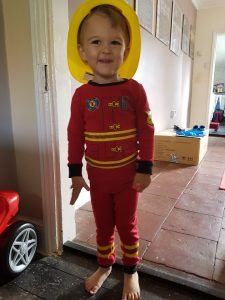 iends who had children. Why? Because it never happened to them. When I went into labour, I didn’t really know what was going on but 8 hours later I was holding my first son in my arms. 12 hours later I was in a side room in my own with my baby down the other side of the hospital fighting for his life.

He had ‘dusky episodes’, where he went purple for a matter of seconds and then was back to his normal colour. He was taken to be examined to NICU. Upon examination, they discovered he had a heart murmur as was admitted. 6 hours after admission he had a scan and it was discovered that he had Tetralogy of Fallot a congenital heart disease that involved 4 structural abnormalities including a hole in the heart, and a narrowing valve which leaks back deoxygenated blood which was causing his dusky episodes. 24 hours after giving birth my world came crashing down around me as I sat on the hospital bed being told my son’s heart was working correctly. This was the first time I have ever heard of CHD something that was now possibly the biggest part of my life, my son’s life.

Again, and again I was asked if my scans during pregnancy were okay, if the pregnancy was ‘normal’. Yes, it was suddenly I was feeling like this was my fault. After all it was me that grew him, delivered him. Family history was examined and statistics were given to us then came the even more crushing blow. To ensure Elijah had a ‘normal’ life, for my baby to survive he would need life threatening open heart surgery before 1 year of age.

For those 6 months leading up to surgery we both played the blame game. Was it something I did during pregnancy? Was it Greg’s family history? The fact he smoked? It was hard to not blame myself and the guilt I felt was immeasurable. I resented others having healthy babies, and not having to go through this. we were so un prepared, we didn’t know anyone who had to go through this. I became obsessed with reading success stories, surgery stats and I was preparing myself for the worst. But because I knew it was coming, I could prepare myself. I could do the research, imagine the outcome no matter how hard it was to come to terms with. I didn’t have this when we received a diagnosis, and that’s what made it all the harder.

Until I had a child with CHD, I didn’t know anything about it, it didn’t even come into my head to even consider it when I was pregnant. Now, I know how important the work of Tiny Tickers is in detecting CHD in pregnancy. We were lucky that Elijah was in a hospital setting and a nurse took him to be assessed. The episodes are so quick you could have missed them, but they were a warning. A warning that got a diagnosis that was hard to accept but it saved his life. It could have been a very different story if we were sent home. We may have missed them as we didn’t know what we were looking at, and we may not be here on Elijah’s third birthday.

I decided to share our story in hope to raise awareness. It is so important to recognise the signs of heart failure, and to make sure the heart is properly assessed during the twenty-week scan. I always imagine if I would have been able to enjoy my pregnancy if indeed Elijah’s CHD was picked up on before birth. I cannot answer that as it didn’t happen. But what I do know from being a mum of a CHD baby is education is the key. It is our biggest weapon. We must learn as much as we can and share it far and wide so we all know the signs. Maybe then, we can all be prepared.