Will was born in 1986 with Patent Ductus Arteriosus, Transposition of the Great Vessels and a large hole in his heart. Here his proud mum, Karen, shares their emotional and inspiring story:

‘Will was born two weeks early in April 1986 weighing in at 8lbs 6ozs. Nothing seemed wrong for the first few days but he started to struggle to feed and was losing weight. I kept returning to the doctors with him only to be told ‘Oh if you really must worry about something, he has a slight infection in his tummy button’. No-one would listen to me, but I knew there was something wrong with him. 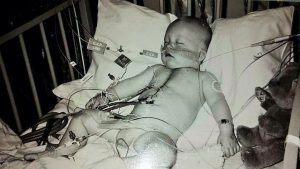 By two weeks and five days old he had lost three pounds, was limp, blue at all of his peripheries with a yellow distended tummy and feeding hourly round the clock. My own GP, on return from his holidays, came round to our house because the surgery was worried I was depressed. I said, ‘You can say anything you want to me BUT please look at Will first’. The doctor was with Will for about half an hour and then said we needed to go to Worcester for further tests.

The paediatrician at Worcester said they needed more specialised equipment. They sent us to Birmingham Children’s Hospital where, surprisingly, they had a free appointment. We weren’t told anything other than Will might have a small heart murmur.

Once at BCH our lives changed drastically and dramatically. The doctors were discussing the heart scan and at that point I thought it sounded as though there was no hope. It all sounded just too dreadful.

Will was found to have Patent Ductus Arteriosus, Transposition of the Great Vessels and a large hole between the bottom two chambers. He needed a balloon septostomy as soon as possible and had one the very next morning. We were told he wouldn’t have survived another 24 hours without it.

After a two day stay in hospital we went home and he started to thrive – he was eating better and his colour improved. When he put on an ounce in weight I was overjoyed. He had another cardio catherisation three weeks later where they noted that the Patent Ductus Arteriosus has started to close on its own and therefore he didn’t need surgery for that.

The big operation for Will was when he was six months old. He had a Sennings procedure to switch the veins round as it was deemed too late to have an atrial switch. Surgery took about eight hours, but it felt much longer. We had been taken round the ITU so we would have an understanding of the different machines Will would be hooked up to and we were dreading it.

He actually had 14 different lines going in and out of his body and he stayed that way for five days. The day after his operation he needed a further five hours of surgery as he had a pericardial effusion or tamponade. I believe that this normally happens very quickly but Will had all the symptoms over a few hours and they were therefore able to better prepare him for the surgery.

Living life to the full

At the time we were told not to expect him to survive his teens, that he wouldn’t have much energy, be able to run 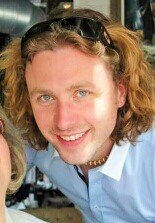 about and probably wouldn’t go to school as he may have severe brain damage and so may other things. Will proved everyone wrong as he is now nearly 32. He went to school with all his friends, he then spent two years at college and moved up to Dundee where he worked firstly for someone else as a gardener and then took on the business himself. As he couldn’t garden in the winter he went mountain biking, snowboarding, surfing and every other sport he could find to do. When he wasn’t doing that he went to Finland, Africa, Spain and many other places on his motorbike before back to Scotland to work.

In 2016 he set off with his best friend and their motorbikes to travel to Malaysia. They spent eight months going through Europe, Turkey, Georgia, Kazakhstan, China, Pakistan, India, Nepal, Myanmar, Thailand and Malaysia. The two of them then packed their bikes up and shipped them back to the UK. Los, his best friend, then flew back to the UK and Will flew onto Australia to meet up with his girlfriend. They travelled all over Australia for a year and have now moved onto New Zealand where they are living life to the full. The doctors and nurses who operated on and looked after Will through his first year were the most amazing people it has been my privilege to meet. They deal with fragile small babies and children every day and they remained friendly, approachable, professional, compassionate and devoted at all times.’