After eight miscarriages, Becky was blessed with her son Aiden. But three months after his birth, Aiden was diagnosed with Tetralogy of Fallot (TOF). Here, she tells their emotional story:
‘When Aiden was born we felt so blessed. He was our little hero as we had lost 8 babies due to unexplained miscarriage.
Aiden was checked over by a doctor before we left the hospital. He explained Aiden had a small hole on the top of his heart. It was a loud murmur so the doctor referred us on to a specialist just in case.  We were worried but comforted ourselves with the knowledge that lots of people have murmurs. 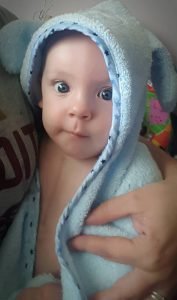 Three months later we had an appointment with the specialist. We explained Aiden had been fine and we had no concerns. He completed a scan and then called over another doctor. Panic began to set in. Why would he need a second opinion?
The doctor asked us to sit down. His first words were “I’m sorry. They got it wrong” My world began to crack open. What was wrong with my perfect boy? He then started to explain that Aiden had a condition called Tetralogy of Fallot (TOF). I can’t really recall much more of the discussion after the words ‘open heart surgery’. All I could do was stare at this smiling perfect baby, not believing what was happening inside his tiny body. The doctor gave us a leaflet and we left.
My mind was racing, not understanding and buzzing with so many questions.  I sat at home and vacantly began reading the leaflet and will always remember the first page. ‘If you’re reading this, you have probably just been told some difficult information.’ At once it felt like someone understood . To fully digest the leaflet, I read it three or four times. We then passed the leaflet on to Aiden’s grandparents – they were also confused by the shocking news.

The operation was planned for when Aiden was six months old. However, a few weeks after the appointment I 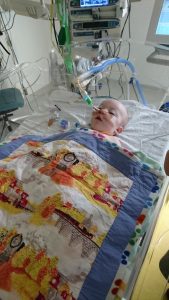 started to notice him getting blue lips if he was upset or eating. As the weeks went on, Aiden became blue more often. As his little body was growing, it became clear he was starting to struggle.
Then one afternoon, when we were singing five little ducks, Aiden suddenly screamed as if he were in immense pain. He then stopped breathing and went white with a blue shadow around his nose and mouth. This was the worst moment of my life  I thought he had died. I’m a nurse but this counted for nothing. In the information we were given it explained “spells.” I lay him down and peddled his legs, blowing into his mouth. Eventually, he came back round.
I left a message for the nurses at Alderhey, I was so shaken and frightened.
After this, Aiden began having spells more frequently – he could have up to four a day by the time he was five months old. He dropped from the 50th to the ninth percentile in weight and began to look grey and sunken. The medication wasn’t holding him. Alder Hey had no choice – they needed to complete the initial repair.

The operation was hell on earth. How helpless we felt, just wandering around the hospital waiting for a call. Eventually it came. He had pulled through and his heart was beating by itself. 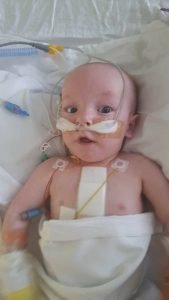 Walking into ICU is a scary feeling. Seeing your little baby on so many drips, drains, monitors with types everywhere and a huge bandage on his chest. I don’t think we will ever be able to get rid of that image.
Being the little trooper he is, he wanted the respirator out after an hour of coming round. He fought so hard to get better. After six days they scanned him. The repair of the large VSD ‘couldn’t have gone better.’ Aiden was allowed to come home the next day.
Six months on and Aiden is doing fantastically. He has regained all the weight he lost. We still see the consultant every other month and we know he will need further operations as he grows.
But for now, Aiden truly is our little Iron Man – the perfect superhero.’
You can find out more about Tetralogy of Fallot  here.