Beatrice was diagnosed with congenital heart disease at her mum, Joanne’s, 20 week scan. She had surgery to repair a narrow aortic arch, close a VSD and shut her PDA duct. Joanne tells their story: 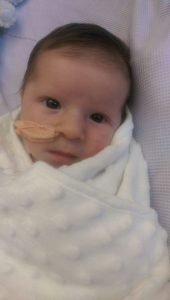 ‘Our journey begins at the 20 week scan, when our Little Beatrice was diagnosed with Hypoplastic Left Heart Syndrome.

Nearly a week later, we went to Chester Hospital. The Consultant needed to scan to confirm the diagnosis given previously. He couldn’t confirm either way and referred us onto Alder Hey where they had better scanners and more expertise. At the same time, they raised some concerns about a possible blockage in Beatrice’s bowel (small bowel atresia). This would also need to be investigated at Alder Hey.

We were referred to Alder Hey Children’s Hospital, where a second scan confirmed the initial diagnosis was correct.

The consultants were undecided and so we had to play the waiting game to see how her heart developed over the next six weeks. The doctor explained the possibilities and diagnosis so far, but said we needed to wait and see. Nothing was mentioned regarding the bowel, their focus was on her heart.

At our next scan they told us her heart had in fact grown and was repairing itself .It was definitely not Hypoplastic Left Heart Syndrome, but she would need a Bi Ventricular repair as the left side of her heart was still slender. 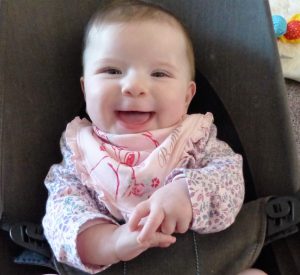 Six weeks later, we were back in the scan room. Again, we were scared but full of hope that our little girl was performing miracles. Her heart had again grown and was no longer slender on the left side. The consultant could not confirm what the outcome would be, but  said she would need open heart surgery within five days of being born.

It was at this final scan that we talked about the possibility of Beatrice needing surgery on her bowel.  We felt very scared at the prospect of Beatrice potentially needing two operations. However, we would fight every step of the way together, all three of us.

Little Beatrice was born in October 2016 weighing 7lbs 9ozs at Liverpool Women’s Hospital. She was taken to Alder Hey three days later for the final scan and diagnosis. They confirmed there seemed to be no bowel blockage. Beatrice would not require surgery for this; it was such a relief and some really positive news. 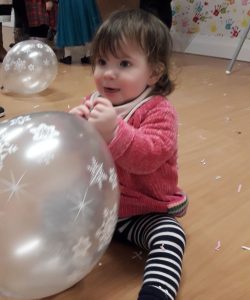 Beatrice had extensive scans and echos; it turned out she performed a miracle. Her heart was normal size on both the left and the right sides. However, she did have a narrow aortic arch, a large VSD and a huge PDA duct. The consultants could not believe that her heart had repaired itself.

They monitored Beatrice daily for the next week. Gradually, over the next eight days in Alder Hey, they stopped the prostin drugs to see how she coped. She coped amazingly well.

We went home with no operations needed but they told us to keep an eye on her. She still had the narrow aortic arch, the large VSD and the large PDA duct. At an outpatient appointment all was looking good.

Unfortunately, six days later Beatrice turned blue. We rushed her to our local hospital, where they told us she was in early heart failure. Her lungs were starting to fill with fluid.

Our world was crashing in around us because we thought she was doing well.

Beatrice was admitted, put on diuretics and she soon improved. After numerous daily scans, they decided Beatrice needed open heart surgery to repair the narrow Aortic Arch, close the VSD and to shut the PDA duct. 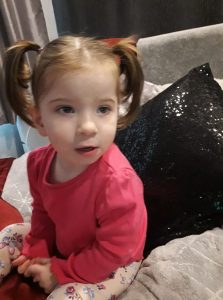 Unfortunately, she developed NEC (Necrotizing Enterocolitis). This is a breakdown of the internal lining to the stomach and bowel. They wouldn’t operate until she no longer showed any symptoms.

On the day of the operation, Beatrice went down at 08:30am and we set about waiting until it was over. When we went to ICU, nothing can prepare you for what you see. But, it is all there for a reason; the drugs and tubes are all only there for a very short time.

The doctors and nurses in critical care were and are amazing. One by one they removed all the tubes and drugs.

Three days after the operation she was back on the HDU ward, where we had been living for the last month.

Little Beatrice carried on doing amazingly well. All scans showed the operation had been a success. She was now fixed, with no more heart problems and she could lead a normal life. 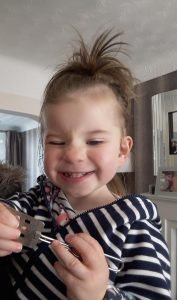 We are permanently in debt to all the staff at Alder Hey Children’s Hospital for giving us our daughter. The consultants remembered Beatrice for her crazy hair, sock-ons and neonatal baby grows! They also remarked many times how strong she was. They thought she would be a cyclist one day…..Beatrice was always cycling her legs!

Every time we go back for a checkup we pop in to the ward to see the staff. They all like to see how little Beatrice is doing. The nurses, cafe staff, cleaners and everyone we came across became our extended family. They do an amazing job. Nothing is too much trouble for them and they make the stay there as enjoyable as it can be. They lift your spirits when your world is a very scary place.

We will never be able to thank them enough for saving our little girl’s life.’