Coarctation of the Aorta- Sonny’s Story

After a normal pregnancy, Sandie gave birth to Sonny, a seemingly healthy baby. It was soon clear to Sandie that something wasn’t right with Sonny’s health and it became a race against time to find out what. This is their story about undiagnosed Coarctation of the Aorta:

‘Tim and I went to our 20 week scan already knowing we were having a boy, after paying privately to find out. We were just excited to see him again on screen and didn’t really think anything could be wrong. The sonographer scanned me, said it was normal and then we left the hospital to go to Cornwall for a babymoon! We were halfway there when I received phone call saying there might actually be something wrong. Apparently, I would need another scan a week later.

That scan did, in fact, come back normal. So we went through our pregnancy blissfully unaware of Congenital Heart 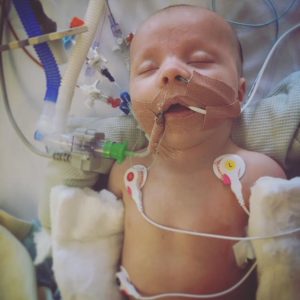 Disease (CHD) and its implications.  I often wonder our journey would have been easier if Sonny’s condition was picked up while I was pregnant.

Sonny was born on 14th Jan 2016 – a beautiful bundle of my everything!

He wouldn’t breastfeed and became severely dehydrated at three days old. We  went to hospital and I was told it was because I had low milk supply. We changed to formula and he fed well on this, so we were discharged. But he still screamed! For hours! And hours! And hours! Not a baby cry but a blood curdling in pain cry!

Tim would come back from work to find me me sobbing and Sonny screaming. I felt like a failure! GPs told me I was over-anxious and health visitors told me he was feeding off my anxiety. But, both Tim and I knew something was wrong.

Coarctation of the Aorta

When Sonny screamed for nine hours solid with no rest and his respirations were 90, we took him to the doctor. It was our fourth visit. This time he discovered Sonny had no femoral pulses. We went straight to A&E.

We found out that Sonny had Coarctation of the Aorta the next day. His narrowing was so severe that we transferred to Southampton for urgent surgery. 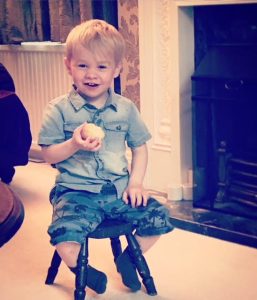 I used to feel guilty at the relief I felt when we got the diagnosis. But, it was relief that we had an answer and someone was finally listening to us. Our surgeon told us that Sonny had been in severe heart failure and we were lucky to still have him!

His surgery went well and he recovered amazingly! He has nine monthly check ups and will do for the rest of his life. But he’s thriving!

Our journey could have ended in the worst disaster. I’m so grateful for that one GP who listened to us. For as long as Tim and I live, we will push awareness of CHD and raise money into research. In fact, we’re going to run the Great North Run this year for Tiny Tickers!

Sonny is our warrior and he made me stronger than I ever thought possible!