Matilda has Supraventricular Tachycardia, which was picked up by chance at the end of her mum, Crissy’s, pregnancy. Here, Crissy shares their emotional story:

‘Late on in my pregnancy with my second child, Matilda,  she was identified as being a breach baby. We decided to opt to have an ECV to encourage her to turn the right way up and increase the odds of a natural and safe labour.

At 36 weeks pregnant we went to hospital for the procedure and during the assessment the nurses detected that Matilda had an extremely fast heartbeat at over 240 beats per minute (the norm is 120-160 bpm).
We were referred to Evelina London and were placed under the care of the Professor of Fetal & Paediatric Cardiology.

The safest option involved intrauterine therapy to convert the fetus to sinus rhythm prior to delivery, so the birth could be with a controlled arrhythmia. Just a week after being on medication Matilda’s heart became controlled.

Matilda was delivered safely by C-section a week before Christmas and was kept in intensive care for one week to stabilise her condition. She still had her heart conditions so was put on medication to manage these, bideing time until she was old enough for an operation.

Matilda didn’t have the best of luck in the first year of her life as she also had a reaction to her first set of jabs and a milk allergy, which caused issues with reflux. As a family, we spent a lot of time in hospital.

For the first three years of her life Matilda’s SVT was monitored regularly at hospital and she frequently wore ECGs to ensure that her heart was still behaving. ECGS are not great on tiny babies and even worse on crawling toddlers!! 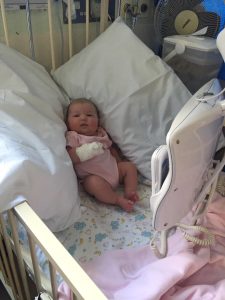 At the start of this year we trialled (for the second time as the first time was unsuccessful) taking her off her medication to see if her SVT had naturally rectified itself. Luckily (touch wood) the SVT seems to have gone into remission and, for the first time in her life, she isn’t on medication. We still have regular ECGs and check-ups at the hospital but at this moment Matilda is a fit, giggly and healthy toddler.

It’s a miracle that we have been lucky and things have rectified themselves without the need for an operation. We are optimistic that the outlook looks good for Matilda and feel happier that if she went back into SVT she is now older enough to be able to tell us she feels unwell.

Tiny Tickers and the values and mission statements of the charity resonates heavily with me. If Matilda’s SVT hadn’t been accidentally picked up because of the ECV, things could have worked out very differently. Training sonographers to pick up heart defects in unborn babies is so important to saving lives. Also, having access to an organisation that supports families through this difficult time is something we lacked, but is crucial to being prepared for what is to come.’ 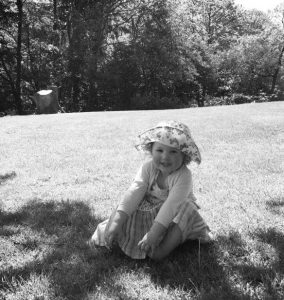 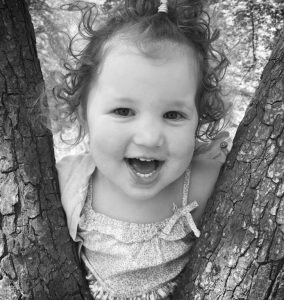 Crissy is taking on the Great North Run on the 9th September 2018 to raise money for Tiny Tickers. If you’d like to sponsor her, please visit her fundraising page here.