Identified at his 20-week scan, Rory was diagnosed with Transposition of the Great Arteries, Ventricular Septal Defect and Double Outlet of the Right Ventricle. When he was born, doctors also discovered he had a Pulmonary Stenosis and Dextrocardia. Here his mum, Hannah, tells their story and we share her exciting project to raise money for other heart babies like Rory:

“We discovered our second son Rory had heart problems at the 20-week scan. To say it was a shock is an understatement! You never think you’re going to be the statistic until you’re told your child has problems. To make matters worse, we had taken our two-year-old son with us. While he was itching to touch all the medical equipment and pull emergency alarms, my partner and I were in tears as three sonographers tried to diagnose exactly what was wrong.

After about 20 minutes, they said they could see arteries were in the wrong place and a big Ventricular Septal Defect (hole in the heart). They didn’t want to confirm more as they wanted us to be seen by someone more specialised.

We were then referred straight to see a Fetal Heart Cardiologist (who was amazing). He tried to get an idea of the exact problems and the outcome for birth. Turns out its harder than you think! We were told he had Transposition of the Great Arteries, Ventricular Septal Defect and Double Outlet of the Right Ventricle. 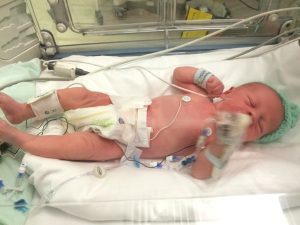 From the first visit to see our coctor ,we transferred to a specialist hospital and from then on had multiple check ups throughout my pregnancy. Rory arrived on January 31st 2016.

Doctors decided I would be induced because no-one was certain what state Rory would be born in and they wanted a space on NICU just for him. Throughout our journey we told to prepare for him not being be able to breathe properly and that he may need open heart surgery straight away. We prepared to spend weeks in hospital. Unless you’ve been in a similar situation, you cannot imagine what a frightening and a truly heart-breaking time it was. The whole pregnancy was traumatic but the support from our family, friends and all the incredible NHS staff was a godsend.

As soon as Rory was born he was whisked away for scans and tests. It was then determined that, along with Transposition of the Great Arteries, Ventricular Septal Defect and Double Outlet of the Right Ventricle, he also had a Pulmonary Stenosis and Dextrocardia.

And to say he defied all expectations is a light way to put it!

For 20 weeks we expected and imagined the worst…to find that it didn’t happen (so far touch wood)!

Because all Rory’s conditions balance each other out (Congenitally Corrected Heart Disease) it meant that after spending four days and nights observation at St Marys we were free to take him home. At 18 months old he hasn’t had any corrective surgery at all! He’s met all his milestones so far and looking at him you woul 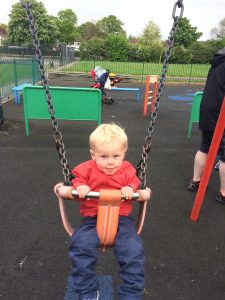 d not know his heart is all wired up wrong. The only indicators are that he tires easily and goes blue because his circulation is poor. He’s also had a couple of hospital admissions (one for bronchiolitis), because he’s not able to shake off viruses as well as heart healthy children.

With regards to the future, we don’t know exactly what is going to happen. We were told they see half a dozen cases each year like Rory and they are hopeful that he can continue as he is doing for the future. But, the likelihood is that in the next couple years he will require surgery (they assume on his Pulmona 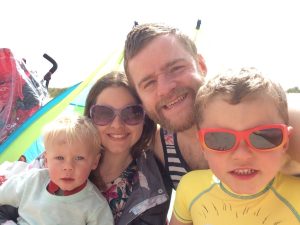 ry Stenosis) to help get enough oxygen round his heart.

Rory is such a bright, happy and inspiring little boy who we are lucky to call our son and without the work of heart charities, their research and training I wonder how different life would be!

Although I have no doubt he would still be the most mischievous cheeky little thing!”

Rory’s journey has inspired Hannah to raise money for Tiny Tickers, to help ensure more babies like Rory have their heart condition detected before birth. Hannah is donating 10% of the profit she receives from selling her beautiful and delicious vegan cakes to Tiny Tickers. Mouth-wateringly inspirational! If you live near Stockport and fancy a vegan, gluten-free bake, make sure you order yours! 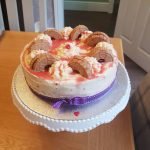 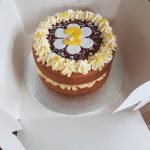