We are thrilled to have been voted by pupils to be City of London School’s charity of the year! The prestigious boys’ school, which was founded by a charitable donation, takes its annual school charity appeal very seriously. 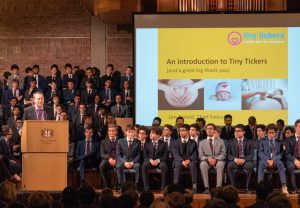 Last week our CEO, Jon Arnold, and Senior Fundraiser, Jenni Cowlishaw, visited the school to meet pupils and staff. They enjoyed hearing about their superb fundraising plans as well as telling the pupils more about our work during a special assembly.

In the past, the school has raised £84,000 for charity in just one year with an impressive array of fundraising events, which include jazz evenings, wine tasting, busking, quizzes and much more. We are very excited to be involved, working with them to raise money and awareness for babies with serious heart problems.

Jon says, ‘Jenni and I were honoured to have spent a morning telling the pupils and staff of the school a little more about Tiny Tickers. We’re beyond delighted that pupils have voted us as their charity of the year, following in the footsteps of so many wonderful charities, and we can’t thank them all enough.’