As the parent of a child with CHD, Vicki Cockerill knows how scary cold and flu season can be. In her latest post, she talks about her son’s experience of the lung infection bronchiolitis. Tiny Tickers is a proud supporter of Abbvie’s More Than A Cold Campaign, which aims to educate parents about the symptoms of bronchiolitis and the steps you can take to prevent your child from becoming ill. 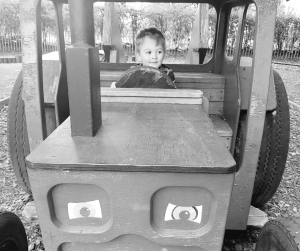 One of the scariest parts of bringing Elijah home from the Neo Natal Intensive Care Unit (NICU) after his Tetralogy of Fallot diagnosis was the training we had to have if he was to have an episode at home.

We were incredibly lucky in that we were discharged with no medication or equipment but I guess that in a way made me worry more.

As much as I hated them at the time, I began to rely on the SATS machines, they provided instant visual reassurance.

The silence that penetrated the room now we were home seemed haunting.

Learning CPR for a newborn, looking for cyanotic symptoms frankly scared me, would I know what to do if the time came?

What if I missed it?

Elijah was in our room up until he was nearly one, I would wake to check up on him a lot.

We had six months to wait for his surgery date down at Great Ormond Street.

Six months of worry, of watching, of waking up in the night to check if he was still breathing.

When he caught a cold, I worried it would cause him too much stress, worry and we would wind up in hospital, to be honest even now four years later I still get the same worry.

Any newborn or young baby having a cold or virus can be frankly terrifying for new parents, the coughs can sound so brutal, the blocked snotty noses can cause problems, feeding, sleeping and in the blink of an eye it can turn into so much more.

As a NICU parent I was always quite aware of protecting Elijah from family and friends who were sick, but the inevitable did happen and for the most part Elijah fought off a cold really well before his operation.

Elijah only had one ‘episode’ in the whole six months before his open heart surgery.

I can remember it instantly.

He had been suffering from a cough and cold for a few days, but is had worsened, he was wheezy and we were due to see the GP that afternoon.

Around twenty minutes before our appointment I was getting his nappy changed and putting his coat on when I noticed he turned blue, flashbacks to when he was first born pre-diagnosis I knew this was real.

Instinctively without even thinking, I did what I had been taught and raised Elijah’s knees to his chest and after about 60 seconds, he regained colour.

I took his straight to the Doctors which luckily was only five minutes from my house and the GP checked his OBS and we were sent to the hospital.

This was the first time we were faced with being on the Paediatric Assessment Unit, and after some tests it was determined Elijah did have more than a standard cold. He had bronchiolitis.

This is a lower respiratory tract infection that is increasingly common in winter months in babies and children under two years old. I had never heard of it until then, which was strange if it was so common.

It can cause a temperature, rapid breathing (look for the sucking in of the ribs), cough, wheezing and difficulty feeding.

After around seven hours in hospital we were told we didn’t have to stay overnight and we could go home, Elijah was given an inhaler.

We ended up in there again with the same thing, within a couple of months and despite some pretty nasty infections now Elijah is four he hasn’t had it since.

I know lots of young babies who have been hospitalised with bronchiolitis and it is important to know if your baby has a cold or it is more than a cold, especially when we are talking about heart babies.

Tiny Tickers supports the More Than A Cold Campaign which aims to raise awareness and educate parents.

If it wasn’t for our hospital admission I wouldn’t have known about it, but it is important that we do arm ourselves with what to look for.