Harper has a form of Supraventricular Tachycardia (SVT). This is her story, told by her mum, Bethany:

‘At my 38 week routine midwife appointment, the midwife listened into the baby’s heart rate and it was going at 200-220 bpm. After a walk around and a cold drink I went to MAU in the John Radcliffe Hospital where they debated on giving me a Caesarean section there and then. 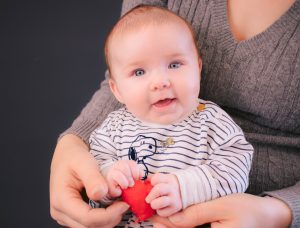 I had a conversation with the fetal cardiologist, who decided I would go on a course of Digoxin to try and reduce the baby’s heart rate. This began to work, but at 39 weeks Harper was ready to meet us all.

In August 2018, Harper was born via emergency Caesarean section. She came out with a heart rate of 246bpm and went straight to NICU, where she was monitored for 24 hours to see if her tiny little heart would bring itself out of the fast heart rhythm.

When she was two days old, the doctor explained what was happening. Harper has a heart condition called Persistent/Permanent Junctional Reciprocating Tachycardia (PJRT SVT), which is a type of Supraventricular Tachycardia. This is a very rare heart arrhythmia and causes Harper’s heart to beat too fast. Harper has a pathway within her heart which is telling it to beat at 200+bpm.

She was put on a course of Fleconide and, after a week in NICU, Harper defied all odds, grew stronger and came out of the SVT. Harper was allowed to come home.

Doctors told us that this could take months to medicate, as it’s very difficult to control through medication. After 13 days at home, we went back into hospital for a check up and discovered she was back in SVT. After rushing into Pediatric A&E to try and control her heart rate, Harper was put on Propanolol and her Fleconide was increased. She had gone back into SVT was because she wasn’t at the right medicated level.

We were admitted to PICU for five days. Throughout this time Harper fluctuated between “SVT” and “sinus” heart rhythm. After the medication found at the right level, and she was monitored for a further four days, we were allowed back home. 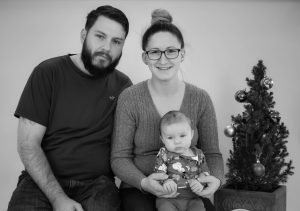 Now at three months old, Harper has been out of hospital for two months. She has had 12 lead ECGs and Echocardiograms to check her heart has no damage from the medication. Our doctor is beyond happy and proud with how well Harper is responding to the treatment. For a condition that is so difficult to treat (in almost every case children are on a cocktail of medication), we are lucky that her first medication is working.

We listen to Harper’s heart rate through a stethoscope at home everyday, to make sure she isn’t back in SVT. We have no idea what will happen in the future, it’s highly unlikely that Harper will grow out of this condition, and she may need to have keyhole heart surgery when she is older. But for now she is medicated and doing incredibly well.’