The Conflicting Emotions of a Heart Mum

When we were first admitted into the Neo Natal Intensive Care Unit and Elijah was diagnosed with Tetralogy of Fallot, I couldn’t take it in.

To protect myself from actually acknowledging that my baby wasn’t healthy, that he wasn’t the baby that I had imagined holding in my arms for nine months, and our start to parenthood was complicated and messy I went into denial. 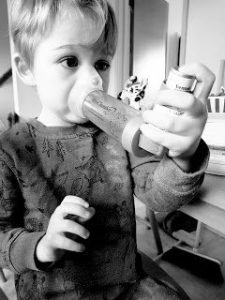 I kept this to myself but honestly, despite what we were being told, the fact he needed to have a life threatening surgery before he was twelve months old, I didn’t believe them.

I tricked myself into thinking and wishing that suddenly someone would check again and tell me that they had gotten it wrong, he was fine, there was no heart problem.

That’s the thing when you have a baby that you are told is gravely ill, but looks just like any other baby his age, one that is thriving and achieving everything you don’t believe he is as ill as they say he is.

I still believed this when we went down to Great Ormond Street for pre admission, and he was having a scan on his heart to determine the extent of the structural defects to plan for surgery.

I was at the side of his bed, and trying to see what the examiner was and working out what it all meant as Elijah was watching the Disney channel on one of the overhead TVs.

The room was dark to see the images better and then, that is when I realised this was happening.

During some more routine tests I asked his nurse whom over the course of the two days we had formed a bond with (that and the fact Elijah had peed all over her and the toy box from the bed he was on) what would happen if we didn’t go through with the surgery.

She looked at me with such kindness in her eyes but quite firmly said, he would die.

Then, that day was the day I truly acknowledged there was something wrong with my child, and that he needed surgery whether he looked like he did or not.

The ‘look’ of illness

It can be hard to tell others and for them to appreciate the true complexity and severity of Elijah’s condition when they look at him and see a happy, energetic four year old running round like a tornado.

For me it is something I have always struggled with, and I must sound so ungrateful and insensitive as I know how lucky we really are to be on annual appointments and no medication or restrictions.

It can fool me into thinking there is nothing wrong, that I don’t need to worry as much.

I have put Elijah up on a pedestal, I believe he is well, frankly amazing, not just because he is my child but because of how he fought, the strength he displayed, the way he beat the odds on everything. I guess I believed he was invincible, he was six months old and had open heart surgery and came home in less that five days.

He has tolerated and fought everything that has been thrown at him.

Yes, I worry perhaps too much, I negate my way out of the present and live in the ‘what ifs’.

It wasn’t until this week when I saw that actually we aren’t quite as invincible as I thought we were.

Elijah had a cough and a cold for a few days and I received a call from nursery after they became worried about him too.

I knew there was something else, he was pale, breathless and working extra hard and I felt I had let him down for not following my gut.

After seeing the Doctor my gut feeling was confirmed that for the first time since his op nearly four years ago his SATS had dropped, they spoke to the on call paediatric cardiologist who came up with a course of action.

He was put on steroids and an inhaler but they didn’t really help.

It really did take it out of him, I had him sleeping in my bed so I could keep an eye on him in the night, I checked on him numerous times and we ended up going back as he still wasn’t improving.

His SATS were still low, so we were prescribed more medication which is now kicking in and he finally has some colour back in his cheeks.

Seeing him so tired, so breathless and the fact he just wasn’t improving really did scare me.

For the first time since his op I was worried that his heart was struggling again.

We are now on the mend, but the last two weeks have been an emotional rollercoaster of conflicting emotions as a heart mum.

The extra precautions, the worry, getting up in the middle of the night to make sure he was breathing took me right back to the start again.
I am also angry for not following my gut when I knew there was more, that I should have done more.

Some have said I am too hard on myself and that there are things I cannot control. But, if you have a heart baby, or any poorly baby for that matter, I think a mother’s natural instinct is to protect and try and make up for the illness.

Perhaps she feels guilty they have to go through this, or that she blames herself, that it was something she did during conception or pregnancy that made this happen.

I tried to regain control but learning everything I could about the condition and my son, I know him and it better than anyone. I speak to the doctors in their language, I research new treatments and became a CHD advocate to raise awareness.

But, the last two weeks really made me confront these feelings and the way I parent Elijah and how much I really know.

I cannot change Elijah’s CHD, I cannot take it away but I will do everything I can to try and make sure he lives a normal life.

I will read as much as I can, push for the care he needs, and ensure I can avoid as much suffering as I can for him, and it felt I failed at this.

I think these emotions are part of the parcel of being a heart mum, but it doesn’t make them any easier.

Vicki Cockerill is a Freelance Content Writer and NICU/CHD mum to two boys. She authors The Honest Confessions Of A NICU Mum Blog, founded and runs The NICU Parent Partnership Organisation, co-founded the @KnackeredandNorwich Social Club and campaigns for NICU and MMH issues.  You can contact her via her blog or social media: