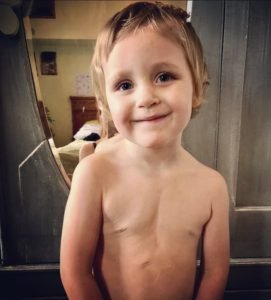 A problem was detected with our middle son Ted’s heart on his routine 20-week scan. We were told something was wrong and our whole world imploded really.

We had to wait nearly two weeks to see a specialist and it was the worst time of my life, fearing the worst.

Once we saw the specialist, we felt a little better as his condition was explained, but nothing can prepare you or eliminate the feelings of dread for the unknown fate of your unborn baby.

I was induced when I was 39 weeks at Liverpool Women’s and my baby was moved to Alder Hey the same day. After a couple of days, he was allowed to come home as he had large holes (VSD & ASD) between his heart chambers which were mixing the oxygenated blood sufficiently.

We’d had a few problems getting him to breastfeed in hospital but as soon as I got him home, he latched on and I was able to establish breastfeeding and exclusively feed him my milk for the next 15 months. 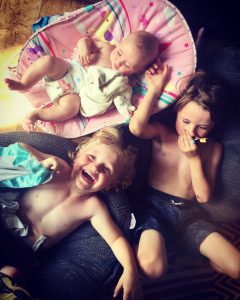 We got a call when he was eight days old telling us to take him in as he was scheduled for surgery the next day. They found on arrival that he’d become quite jaundiced and started light therapy immediately. We sat with him throughout the night not sleeping a wink, we didn’t want to waste a precious second with him.

He had his switch op and VSD and ASD closures the next day when he was nine days old. He was in surgery for 9.5 hours, easily the longest, hardest day of my life. I shakily signed a certificate to say the possible outcome was death. His surgeon informed me that he would definitely die without it, so I had no choice.

Ted was then in intensive care for what felt like years but was only a few days, the dedicated and specialist care he received was astonishing. I pumped milk in the hospital every 3 hours and built up quite a store which they fed him through his feeding tube for the next week or so. 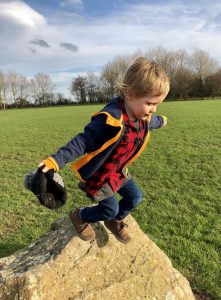 Unfortunately, he kept getting infections post op so our stay at hospital lasted a few weeks until he was well enough to go home.
Luckily, we’ve never looked back since though and he’s now a thriving boisterous three-year-old who we can’t imagine life without.

Ted taught me what life’s all about really and what’s important, he put everything into perspective for me. I owe the surgeons, nurses and all the hospital staff as well as organisations like Tiny Tickers my whole world, there are no words to describe how grateful I am.