Rhys’ heart conditions were detected at his mum, Kayleigh’s, 20 week scan and she believes he wouldn’t be here today without that early diagnosis. Here Kayleigh tells their story: 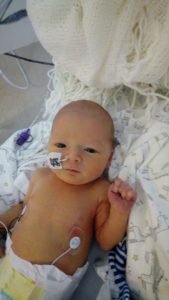 ‘The day of Rhys’ 20 week scan was the day his heart condition was detected. He was diagnosed with TGA (Transposition of the Great Arteries) and a VSD (large hole between the bottom chambers).

We were devastated by the news and offered a termination. That was not a option – how could I do that to my little boy? Rhys was extremely lucky it was detected, because it gave him the best chance when he arrived. So many babies go undiagnosed with heart conditions. We knew a lot of planning had to go into his birth and what treatment he would be offered.

Week 37 of pregnancy came and on the 30th October 2017, I was admitted onto the labour ward for induction. On the third pessary my midwife could feel Rhys’s head, however he decided to start stressing out and his heart rate became dangerously fast.

We were rushed for a emergency c-section and at 9.01am on 31st October 2017, Rhys came into the world with a good set of lungs. He was rushed off to be ventilated and for prostone medication to start. His first 24 hours were the most crucial stage. He was kept nil by mouth, just in case he needed emergency surgery. 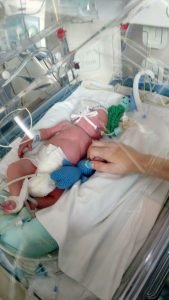 Rhys was a strong little boy. He didn’t need the medication and he maintained good oxygen levels. He didn’t need to be ventilated and the prostone medication was withdrawn. It was during his ECHO (heart scan) that the other heart conditions was diagnosed. DORV (Double Outlet Right Ventricle) and PS (Pulmonary Stenosis). Rhys may be plumbed all wrong, but he still maintained good oxygen levels and this surprised the cardiology team. His eleventh day was the day his oxygen levels deteriorated and he was rushed to Alder Hey.

On the 17th November 2017, Rhys had his first heart procedure. He went down to theatre, had general anaesthetic and then off he went for a balloon atrial septostomy (catheter through the groin). The procedure worked and his oxygen levels improved, but we were given the devastating news that Rhys had a stroke during the procedure. We spent six days in ICU. We watched him fight each day. He finally got better went back to the ward. At five weeks old he came home and was monitored twice a week by the community team until his next procedure. 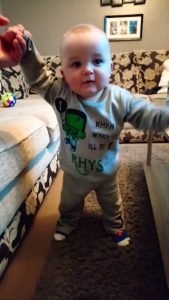 On the 10th September, when Rhys was 10 months old, we handed him back over to Alder Hey. His first open heart surgery was a procedure called the Glenn. Rhys’s consultant said it was the best procedure for him at this point. He wasn’t in hospital for long after this operation as he bounced back quick.

Rhys now has to wait until he’s four or five years old for his next operation. His medical team want to monitor the VSD and see what that does – some can close on their own. He will either have a full repair or The Fontan, which means they can only repair half of his heart.

If it wasn’t for the sonographer, who detected the heart condition at the 20 week scan, Rhys wouldn’t be here today.’