Poppy’s heart condition, Transposition of the Great Arteries, was detected soon after she was born. Here her mum Krystal tells their story: 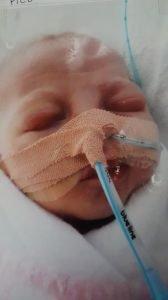 ‘Poppy was born at 37 weeks. We didn’t know anything was wrong. She was blue in colour, but the midwives put it down to the fact she was born in the car outside and it was cold.

The next day she was still no better with her colour, so the doctors had a look at her. As she was small, they took her into SCBU where the machines were smaller. She really was tiny. They said her SATS (blood oxygen level) was 47%, which was very low.

After that an alarm went off. Myself and Poppy’s dad were ushered out and they said someone would come see us. A while later we were taken to see her. The doctor said they didn’t know what was wrong and she needed a specialist hospital.

Poppy was on a ventilator as they had to resuscitate her. She was given a bed at the Evelina. Once there, the doctors found she had Transposition of the Great Arteries (TGA). 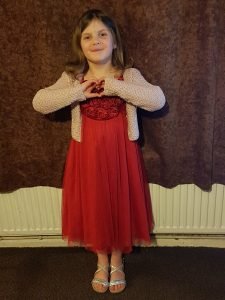 The next day she had a Balloon Atrial Septostomy. This was to buy her more time. At a week old, she had the six hour operation to correct the TGA. I’d never even heard of heart conditions until I had my youngest, but she’s is now a happy, thriving 6 year old.’