Samson’s heart defect, Tetralogy of Fallot, was diagnosed at his mum, Jenni’s 20 week scan. Here she tells their story: 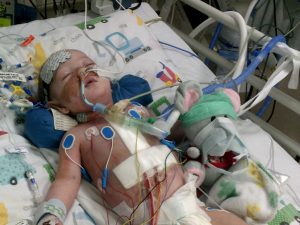 Samson’s anomaly scan at 19 weeks brought some concerns about his heart. We had to go back for a repeat scan at 20 weeks with the consultant, and we were then referred to the Fetal Medicine Unit for a specialist scan at 21 weeks.

There, Samson was diagnosed with Tetralogy of Fallot. His heart was carefully monitored but the day before we were due at the FMU to make final plans for his birth, he had to be delivered by emergency section at just 32 weeks.

Samson had further complications that required immediate surgery, and I am so grateful that his CHD had been diagnosed in utero – otherwise the outcome may have been very different. His SATS were consistently very good and he was pink; there were no visual clues that there was anything wrong with his heart.

One of our biggest battles and a constant source of worry was Samson’s weight. He had gained nicely whilst in NICU/SCBU, as his expressed milk had fortifier added to it to help. However, once we were discharged and went home, it quickly became clear that breastmilk wasn’t providing enough calories. 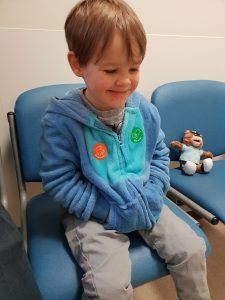 We also had the additional problem that his birth defects were working against each other and making it almost impossible to consume and retain enough – his tracheo-oesophageal fistula with oesophageal atresia (TOF/OA) left him with severe reflux, so it was difficult for him to keep his feeds down, and his heart having to work so hard to keep beating meant that any calories he did retain went straight to his heart and left very little to help him gain weight.

He was put onto high calorie formula milk, and referred to a dietitian once we got to the stage of weaning. By the time Samson was four months old (two months corrected age due to his prematurity), he was off the bottom of the weight chart. He kept falling further adrift of the bottom line until nine months of age, when his weight gain stopped completely. The dietitian informed the cardiology team that he desperately needed his surgery. He had been on the standby list for almost two months by then, but the time had come that his repair was needed.

On the morning of his surgery, at nine months old, he weighed just 5.31kg/11lb 11oz. His operation made a huge difference immediately, he started piling on weight straight away because his heart was no longer working so hard. Within two months he was back on the chart, and he kept on climbing the centiles, eventually settling onto a line between 25th and 50th – something we couldn’t have imagined in our wildest dreams before surgery! 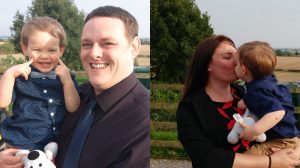 Even his recovery was something he surprised everyone with. We were told to expect at least two weeks in hospital post-surgery – Samson had other ideas and was discharged after just nine days.

Since his heart surgery, Samson has gone from strength to strength – which is fantastic because we chose his name in the hope that it would inspire strength in him, knowing that he had a huge battle to fight. He turns four in May 2019, and he has been attending school nursery since September 2018. He is actually developmentally ahead of a number of his peers.

You would never know to look at him what an ordeal his first year was, or that he has ongoing underlying problems that he will always have monitored by his consultants; it is just the scars under his clothes that give it away. His day-to- day life isn’t hugely impacted by his birth defects – he does tire a little easier than most children his age, and he does have some restrictions on what he is able to eat due to his TOF/OA repair, but for the most part he just gets on with things in much the same way as any other child his age. 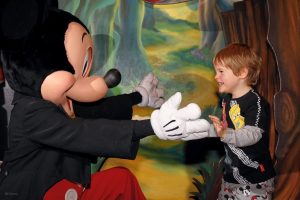 This means we get to do “normal” family things, so we took him to Disneyland Paris this winter to meet his hero, Mickey Mouse.
We now see his cardiologist once a year for monitoring, most recently in January 2019 when Samson’s consultant was happy to tell Samson that he has a very good heart! There’s a good chance Samson may need surgery down the line to replace his pulmonary valve, but that is unlikely to be needed until he reaches adulthood. So, for now, we are able to continue with a fairly normal life – but we never lose sight of how amazing our boy is, and how lucky we are that he’s here at all.

There’s no doubt in my mind that the early detection of his CHD saved him.