Toby-Jacob was diagnosed with Tetralogy of Fallot before he was born. His mum, Amy, tells their story: 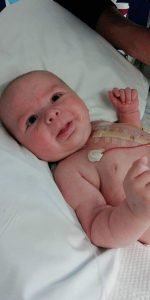 At 20 weeks pregnant, I went for my scan. I found out I was having a boy but little more could be seen. I was asked to return at 22 weeks. The next scan felt like it took forever. Eventually, the doctor explained there was something not right with my baby’s heart and referred me to a specialist hospital. Two weeks later, at 24 weeks pregnant, I had another scan and of Tetralogy of Fallot was diagnosed.

We were told babies with this condition often have a chromosome abnormality, but we refused testing for this until after he was born. Eventually we found out he has a rare condition known as XQ28 Duplication, but there is limited knowledge about whether this is related to his heart condition.

I continued to have regular scans throughout my pregnancy and was closely monitored by local and specialist hospitals. During my pregnancy this caused a lot of stress and uncertainty. My local hospital did not want to deliver a heart baby. At every appointment I had, they told me I should to go to the specialist hospital to deliver. The specialist hospital had been monitoring my son’s heart on and assumed he would be born stable (which he was) and therefore would not allow me to deliver there. Up until the week before my son was born, I did not have any confirmation of where I needed to deliver. Eventually my local hospital agreed that, under the specialist’s advice, treatment plan and support, they would deliver my son.

My son was born via planned C-Section on 6th December 2017. He was beautiful but I was not able to hold him for over 6 hours. He was taken into special care and monitored. 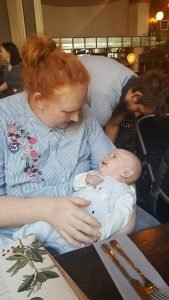 After being discharged, we went to appointments at the specialist hospital where Toby-Jacob was given heart scans. At the second appointment, when he was two months old, we were told he may require open heart surgery soon. A few days later he deteriorated and began having “spells”. They got worse and he was admitted into the local hospital.

The local hospital had limited understanding of his condition and diagnosed him with a chest infection. They were going to send him home on oxygen until he had turn for the worse. He was pumped with oxygen via a mask and tubes in his nose just to keep him somewhat stable before being given heart medication.

He remained in this state for a day before he was stable enough to be transferred to the specialist hospital. Toby-Jacob was scanned multiple times and we were informed that he couldn’t leave hospital until he had undergone surgery, but they were unsure when this would be. Doctors were unable to detect his blood arteries and met with surgeons many times to discuss the risk of surgery without knowing where these were in his heart.

After a few weeks, they decided that, although he was only three months old and there was some uncertainty which procedure would be best for him, he would be going under the knife for open heart surgery. His Christening was supposed to take place during the week of his surgery, so the priest did a blessing the day before his operation 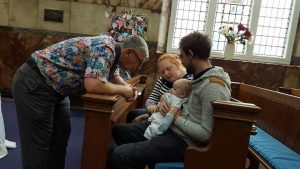 Seeing him after his surgery was tough as there were wires coming out of every part of his body, something we had been told to prepare for since I was 24 weeks pregnant. I’m afraid to say it is not something any parent can prepare for.

Toby-Jacob made a fast recovery. He was off ventilation after a few hours and, after only five days, he was allowed to take me out for lunch for my first Mother’s Day. The next day he was allowed home. Now my son is like every other one year old, but with a very important scar on his chest. In his future he will need more surgery and he will be constantly monitored, but for now we are just thankful he is doing so well. He’s my little heart warrior.’

Find out more about about Tetralogy of Fallot here.