Coarctation of the Aorta – Freddie’s Story

When Freddie was born, everything seemed fine. However, a few days later his mum, Naomi, became concerned something wasn’t quite right and sought medical help. By the time his heart defects were diagnosed, Freddie had gone into heart failure. Here Naomi tells their story: 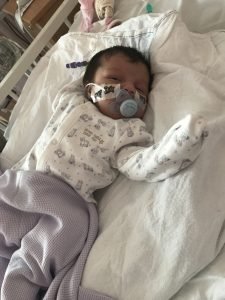 ‘When I was pregnant with Freddie, all my pregnancy scans were fine. He was born full term and appeared to be healthy, so we were sent home seven hours after his birth. A few days went on and he started showing symptoms that something wasn’t quite right – he became breathless, was asleep all the time and wasn’t feeding properly.

I took him to see the doctor, who checked him over and reassured me that he was completely fine. However, I wasn’t happy with the diagnosis, so I took him to hospital. By this point he also had a crackly chest.

After lots of blood tests, chest x-rays and multiple phone calls to Birmingham Children’s Hospital, the doctors discovered what was wrong with him. A nurse came to tell me that Freddie was in heart failure. He was rushed into the High Dependency Unit and given oxygen and diuretics to drain off the fluid around his heart. They kept him stable until we could get over to Birmingham Children’s Hospital. 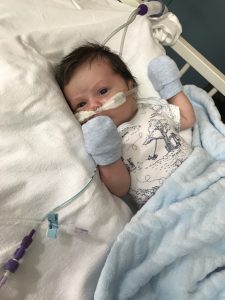 When we arrived at Birmingham Children’s, they did an echo and told us he was very poorly. My son had two VSDs and one was very large. He also had severe Coarctation of the Aorta and narrowing of his aorta, which meant blood flow was not getting to the bottom half of his body.

Doctors said he needed emergency surgery, but he could go into cardiac arrest at any point. He went down for surgery and had a PA band fitted as well as a coarctation repair. Freddie spent eight hours in surgery. When he returned from theatre, he went back again pretty quickly because he was desaturating. However, he then recovered well after developing a few wound infections.

Six months later, his coarctation returned and, after a failed cardiac catheter, the cardiologists decided it was best to perform open heart surgery. He went onto a heart and lung bypass for a total of 80 minutes and spent seven hours in surgery. This involved aortic arch reconstruction. 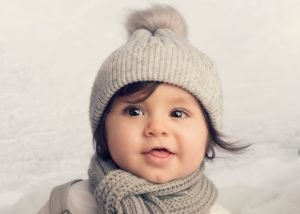 Since his surgery, Freddie has recovered well. He still has his check-ups and will need more surgery in the future, but for now he’s doing well. Freddie’s story is a perfect example of why all babies should have a pulse oximetry test when they are born. If Freddie had been given the test, his heart defects could have been picked up early and he wouldn’t have gone into heart failure.’